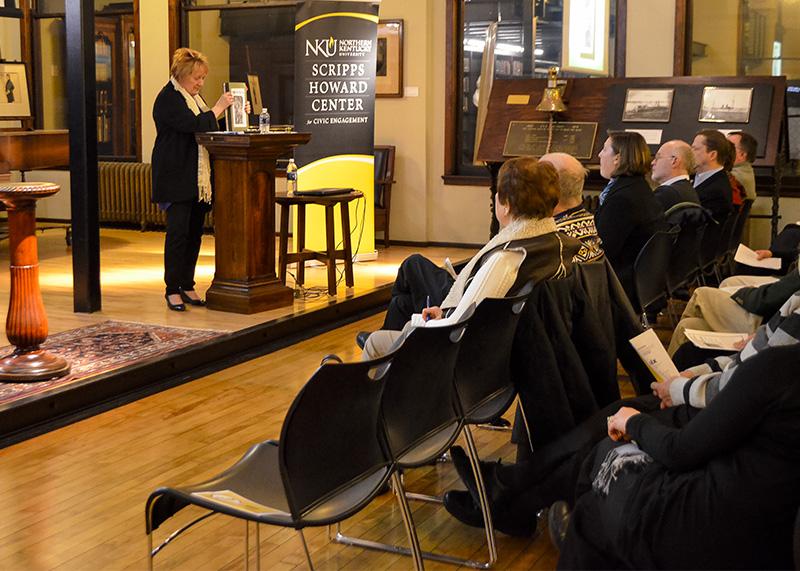 High in the Appalachian Mountains, a young, holy woman and snake handler struggles to understand her life and her faith in the wake of an unexpected betrayal. That was the story that Sue Ott Rowlands, provost and executive vice president for academic affairs, brought to life for audiences in the Corbett Theatre. Rowlands, a professional actress, captivated audiences in a limited run showing of “Mud Nostalgia” March 26 – 28.

“Mud Nostalgia” was the latest in a long-run of solo works Rowlands has performed around the world, it marks the first time she has taken the stage at NKU and the third time she’s performed this particular piece for audiences. The Northerner sat down with Rowlands to see how she felt about the show, talk future shows she might do with the department and look at the experience that was “Mud Nostalgia.”

Q: How you felt about the success of the show?

A: “I felt it went very well. The audiences were very appreciative, they were good audiences. They listened very carefully which is incredibly important when you have a solo show that is very text based… it’s really more about the language. You can always tell if an audience is really listening or if they’re not. Because I talk directly to the audience, it’s great if they’re engaged and this audience was.”

Q: What did it mean to you to be able to work with the theatre department here?

A: “It was fantastic! That’s my home department as a faculty member and I rarely get to engage with them. I’ve been in as a guest in a couple of classes, which I love. So the whole week was really spent over there and it was great to get to know people. It was great to talk to the students in class. The director [Bruce Hermann] and I talked about creating theatre and collaboration to a combined class of students in acting and directing. The playwright [Mark Evans Bryan] talked to a playwriting class as well. So, the students were just fantastic. They were really intrigued by the play, I think they don’t often get to see someone doing solo work and it opened their imaginations as to how they might devise works of theatre… they became co-collaborators with us, it was just a week of filling my artistic soul.”

Q: So the support from the department was something you enjoyed a lot?

A: “Yes, the department of theatre did a super job in terms of support for the production. They provided terrific lighting and costume design, stage management and makeup support. That was really great because a lot of times when you are doing solo work you’re just traveling by yourself . . . There’s generally very little technical support, which on the one hand is great because it makes it very portable, but on the other hand it’s just nice to have a real support team and be back in a theatre space.”

Q: Any challenges experienced, maybe because students had never really seen solo work like this before?

A: “No I don’t think so, I think if anything it made them more curious and more open because of what they saw.”

Q: You were very passionate about doing this particular play, so what was it about it that made you want to do this specific piece?

A: “In talking with Ken [Jones, chair of the theatre department] I gave him some options of the different pieces that I have, I have about three right now that I can brush up and do… He just felt and I agreed that the snake handling play, which is set in Appalachia, just seemed so relevant. Also because I devised it with the playwright there was a personal sense to it.”

Q: What did you learn from the particular piece?

A: “I learn every time I do it, because every time you do live theatre it’s different. I think this time I realized how the meaningfulness of the play is enhanced for the audience when you add some of the design elements. An audience has an imagination, they hear the story and get caught up in it. When you add atmosphere and tone and mood through lighting, when you increase the authenticity with a good wig or costuming… this was also the first time I used a wireless mic, so I could have those quiet moments and still be heard. So I think for me this time it was about the value added from the full production experience and how that illuminated, for both the audience and me, nuances in the play that might otherwise not have been as powerful.”

Q: Do you feel it was well received by the audience?

A: “Since I’m talking right to them I can tell if they’re fidgeting, sleeping, reading their program or going to the bathroom and coming back. And there was very little of that. Mostly it was people listening, nodding, laughing, if I smiled at them they smiled back. There was interaction happening. Also a remarkable number of people stayed for the discussions afterward each night.”

Q: What past experiences as a trained actress helped you with this particular piece?

A: “Doing solo work is one of the more challenging types of theatre… because you really have to be present in the moment and be honest, it demands a tremendous amount of honesty. If you start performing it or doing actor schtick it just rings so false. I think it’s really powerful for young actors to try their hand at solo work… but having the ensemble work before is important to have the confidence to stand alone on stage. I think that anything you’re doing at any given moment is a product of what you’ve done in your lifetime before.”

Q: Did you have any favorite moments in the performance?

A: “I have a good time doing these things. I don’t know if I have a favorite moment, in fact it’s kind of dangerous to let a moment become a favorite moment because then you will treat it like it’s precious. And then it becomes really bad because it’s no longer genuine. Sometimes if you feel you’re falling in love with a section of a play, you really need to talk yourself out of it or try not to think of it that way.”

Q: Would you want to do something like this again with the NKU theatre department?

A: “Yeah I told Ken [Jones] I’ve got many more where that came from. I don’t imagine I’ll be doing anything again like this anytime soon, but maybe in a couple of years, maybe the next time the Y.E.S. Festival comes around we’ll want to put up another solo piece… I try to do several performances a year just to keep my hand in it.”