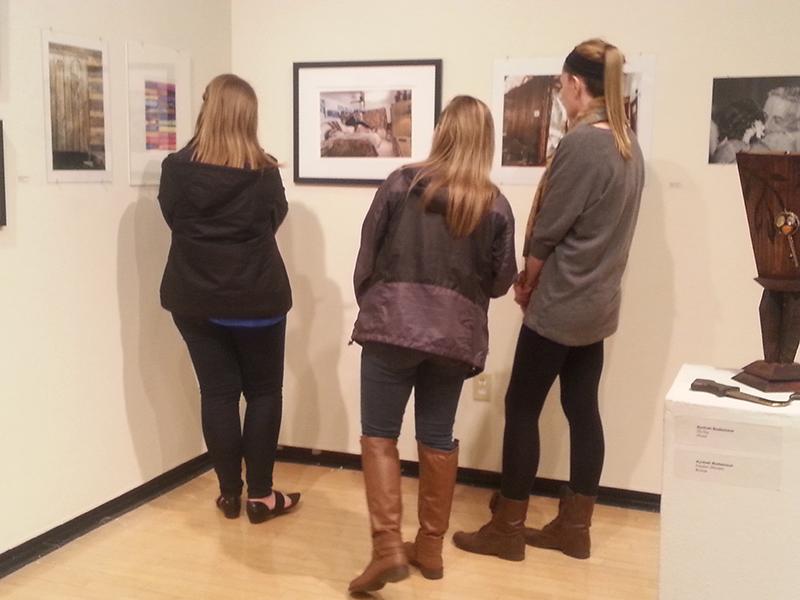 Students at NKU got a chance once again to display their talents in the annual Juried Student Exhibition in the Third Floor Gallery and Main Gallery of the Fine Arts Building.

To make it into the gallery students had to submit their work so that it could be evaluated by an experienced juror.

Roughly 300 pieces or art were submitted, one of the highest number of submissions in the exhibition’s history, but only 175 of them were chosen for the show. The pieces in this year’s exhibition were created through an array of artistic mediums, including oil painting, photography and even sculpture.

Even NKU alumni have been drawn back to campus to see what current students have crafted. Alexandria Samuels, a studio arts major who graduated in 2005, stopped by the gallery to see what pieces had been selected for this year’s exhibition.

“I never had the chance to enter, but I love looking at how art students at NKU are still pushing themselves to be expressive with whatever medium speaks to them,” Samuels said.

For this exhibition, the visual arts department brings in an outside juror. This year’s juror, IRS Qualified Fine Art Appraiser Morgan Cobb, looked at all submitted works individually and selected the works that were installed in the third floor galleries for the exhibition. According to David Knight, gallery director at NKU, the Annual Juried Student Exhibition is the biggest show opening of the year and one that art students should submit their work for, even if their pieces are rejected.

“Part of being an artist is being accepted and declined for shows,” Knight said. “It toughens them up and gets them ready for the real world of being an artist. A lot of students look forward to entering their work and having someone critique it from outside of the safety of campus.”

On March 26, a reception was held for the public with an awards ceremony following. Before the official awards were given, Knight was presented with a plaque by the Visual Arts Department Chair Thomas F. McGovern III as a sign of gratitude for 25 years of dedication to the arts department at NKU.

Students could enter up to five pieces of art for the chance at one of the nine Merit Awards or the coveted Best of Show. Studio arts major Mario Barbi won Best of Show for his graphite drawing, Fog in Milan.

One of the students who received a Merit Award was senior drawing BFA Kala Lewis. This was not the first year Lewis has entered her work in the exhibition, but this was the first year she took home an award. Specifically, it was for her charcoal drawing titled Beat Down, which was one of the two pieces she entered. Though she is grateful for the honor, Lewis is just glad that students have the opportunity to showcase their talents in the first place.

“It’s a really nice thing for art students to have,” Lewis said about the exhibition. “You don’t see this level of dedication with a lot of colleges, especially when it comes to art.”

The exhibition will be on display in the main galleries on the third floor of the Fine Arts Center until April 3. All NKU students and faculty are encouraged to come and view the artwork.