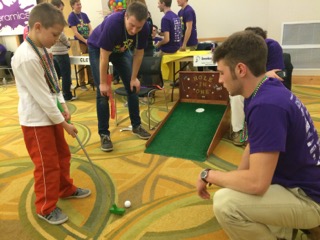 Participants could play games including Putt-Putt, Texas Hold Em and Giant Kerplunk to win tickets, which would be put into a drawing for a prize basket, complete with donations from Larosa’s, Buffalo Wild Wings, City Barbecue, Ivy Hills Country Club, the Bengals and more.

The fraternity has been planning the event since November, and since then have sent out over 700 donation letters and reached out to 900 businesses to ask for contributions. Justin Wynne, president of the fraternity and a senior majoring in international studies and journalism, wanted to grow the event without losing the warmth and personal touch.

“We originally wanted to get the gym where they play volleyball, but we liked the intimate setting of the ballroom,” Wynne said. “We also wanted more campus involvement. Last year there was a lot of friends and family and girlfriend involvement. Getting people to go to NKU on a Saturday is rough.”

This year, ATO aimed to prove philanthropic causes could be fun. Wynne wanted it to be less high-brow function, and more hard working people. For the latter, he points specifically to Andrew Bamberger, philanthropic chair for the fraternity.

“You can’t compliment Bambi enough,” Wynne laughed, referring to Bamberger’s popular nickname. Wynne says while he knows plenty of Andrews and Drews, he only knows one living Bambi, and the name stuck. “He just lives for this at 21.”

Bamberger, a junior social work major, was also a part of Relay for Life, another charity dedicated to fighting cancer, and hopes to make events like this his career. Bamberger pointed to incoming freshman as a major part of the leadership for this still young event, but nearly every finger in the room pointed back to him as a point of praise for the night’s success.

“He’s so into it, his motivation made everyone want to raise more money,” Chris Benvie, an ATO sophomore majoring in accounting, said.

Benvie saw a change in himself from year one to two of the event when its purpose hit close to home.

“This whole night is about breast cancer. It hit my family hard,” Benvie said. “My grandma didn’t have it until last year after the first event. Now, it’s different for me because I’m raising money for what I care about.”

In the past before Mardi Taus, the fraternity would host a basketball marathon, but sought a change as interest and appeal declined. Wynne found it difficult to convince a wide audience to bring a team of five to play ball. That’s when the idea for a rebrand was born, and Mardi Taus was born. The biggest challenge was initiating the change.

Wynne jokingly pulled at the fraternity’s shirt for the night, a purple short sleeve with all their corporate donors on the back, and said, “I wish you could see last year’s shirts. The amount of sponsors is a huge difference.”

The fraternity expects to grow Mardi Taus, and has plans in place to get it done,  including more games to appeal to the college kids, hopes to partner with the game room and to get more into the Mardi Gras theme, but not to outgrow NKU.

“I hope we don’t grow beyond NKU’s capacity to hold us,” Wynne said. “I like to be a reason for students to come out of their dorms.”