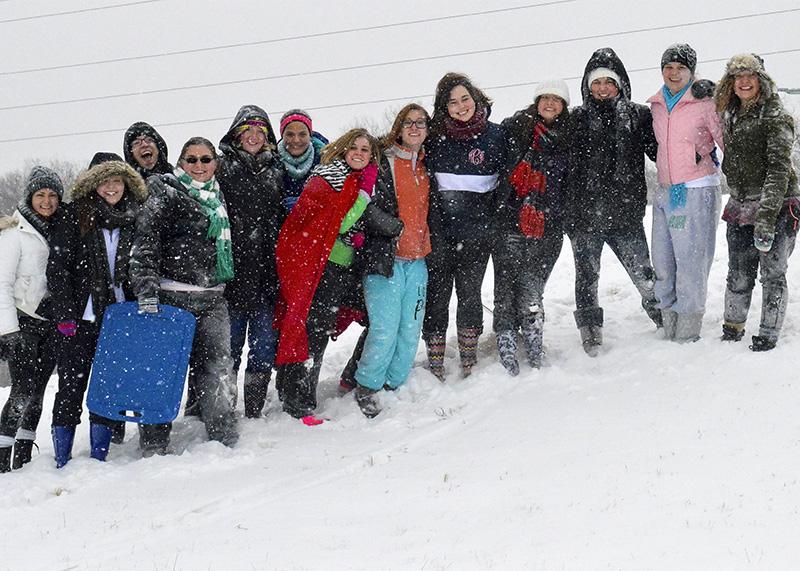 A group of students gathered on campus for Snow Day fun. NKU was closed Monday, Feb. 16 due to inclement weather.

It’s that time of year again when the area gets hit with snow and NKU experienced its first snow day of the year. Last year, we had one school closing on a Saturday. The other days were late opens or early closes, according to Director of Marketing and Communications, Chris Cole.

The impending snow storm was all over the news Sunday night which gave hope to some students.

“I was hoping. I went ahead and stayed up super late even though I have two morning classes,”  Jake Beatrice, junior media informatics major, said. “It was a gamble.”

Some of the schools that closed for the snow include NKU, the University of Cincinnati and Eastern Kentucky University.

According to Cincinnati.com, the counties of Boone, Campbell and Clermont are expected to have between 6 and 10 inches of snow.

“I am stuffing my face with pizza and playing my new 3DS,” Beatrice said. “I’m procrastinating shoveling the driveway.”

Others are spending their day indoors staying warm with friends.

“I am sitting in a pillow fort watching a Star Wars marathon with friends,” Emily Marsala, junior visual communication design major, said. “And catching up on my homework!”

Some students have also journeyed out into the snow like what Cole plans to do.

“Snow days are fun. It’s unfortunate we have to close campus due to weather sometimes, but it is really coming down out there. I’m happy we’re able to tell our campus community to stay home and be safe,” Cole said. “As for my day, I plan on doing some reading and maybe finally starting Dexter. Later, if I’m feeling brave, I may go play in the snow.”

Although snow days are fun and a nice break for students, some have a feeling they might be missing out.

“Since I’m paying for school now, I do feel kinda bummed that I’m missing out on classes,” Beatrice said.