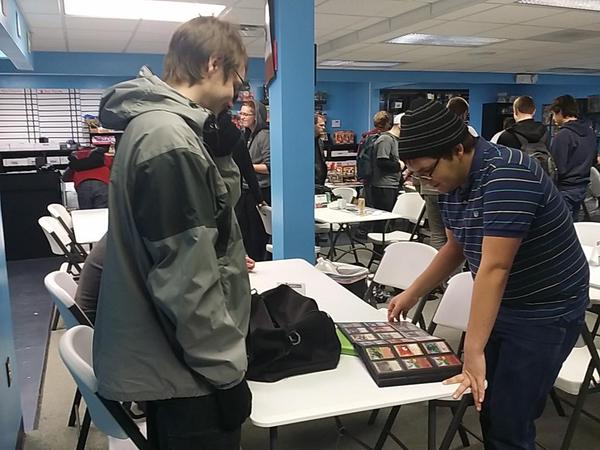 Claudio Rodriguez sat across the table from his friend, Michael Rupert, smirking.

“This is what you do in Magic — you psych your opponent out,” Rodriquez said, after smack-talking Rupert as their best-out-of-three match began.

Within 20 minutes, Rodriquez, a freshman Electronic Media and Broadcasting major, had beaten Rupert in the third game.

Magic: The Gathering is a popular trading card game where players customize their own decks with a collection of different spells and creatures, and try to defeat their opponents by reducing their life count from 20 to 0.

On six nights of the week, Two-Headed Games in E-Jay’s Plaza in Highland Heights hosts Magic tournaments based on different rules (see text box). Their largest weekly events happen on Friday nights, though, according to Adam Bowman, an employee at the store.

Their Friday Night Magic event on Feb. 6 drew 34 people in to Standard play. The amount of people meant that there would be six rounds, which last about an hour each.

In addition to those playing Standard, others were there playing in different formats, including Commander and drafts.

Chris Bowman said the amount of people is one of the main reasons he plays at Two-Headed Games.

“When I first moved here,” Chris said. “I tried out about eight stores in the tri-state area, and found this one and loved it and have never left.”

Adam Bowman said that this particular event was attended more heavily than usual, because players were preparing for the regional tournament in Columbus the next day.

However, one of the big things that Adam said he thinks players like about Two-Headed games is their point system, which is unique to the store.

Players win points for winning games and matches — each game you win in a match, you get one point, and then you get an additional point for winning the match. However, Adam said, players can lose points for different things, such as winning  within the first turns of a game.

After winning the points, the players can use them for different prizes around the store.

“It’s all about having fun,” Adam said.