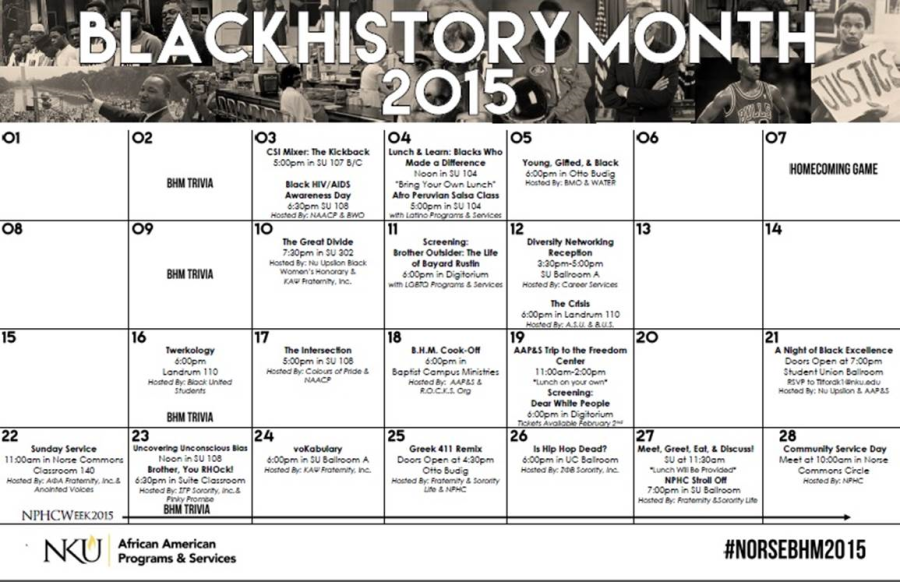 The African American Programs and Services office have focused their efforts towards Black History month with full force. For the next three weeks of February students and faculty can attend 16 events hosted by different African American organizations; ranging from identity crisis forums, to an ol’ fashioned cook-off.

The office has beefed up their Black History Month layout following controversial events about race nationally, and locally.

“Compared to last year we have a lot going on,” MiMi Gebergeorgis, coordinator for African American Student Affairs, said.

Days before students were released for winter break; a ‘die-in’ protest was held in the Student Union involving students who support #BlackLivesMatter; a national movement that focuses on racial equality.

Students laid down on the floor in the lobby to morally support young black teens that they believe, were wrongfully killed by police enforcement. The NKU ‘die-in’ sparked a lot of conversation between students.

“It’s so easy for people to say those things don’t happen, it was needed more for the people watching than the ones who were participating,” Gebergeorgis said

In result of events like the ‘die-in’ and talk through national media about race equality, some students believe NKU’s celebration of Black History Month couldn’t be more relevant.

“It is very important for us to keep alive Black History Month. This being a predominantly white institution it is important we as blacks remind everyone; if we don’t care, who will?” Matthew White, junior, said.

Student organizations of African American Programs and Services, and the office itself plan to host events that will educate all races on campus about Black history, and the perspective of Blacks today. Feb. 19 students and faculty are urged to view the screening of “Dear White People” at 6 p.m

Following the screening, an open discussion will be held to talk about how the film applies to NKU, all student comments are welcomed. The film is a partial-satire piece on the perspective of young black college students in a predominantly white institution.

Some students believe that knowing one’s own history will be especially helpful for educating others.

“We want to be experts on our own history so that are successfully able to share with others where we came from, and why we’re proud to be Black,” Nicole White, an NKU alumni, said.

Gebergeorgis explains that the presence for education of Black History isn’t strong enough.

“Sometimes a lot of people in education don’t get what they need in black culture; they get everything but black history. It’s helpful to everyone, it’s not just white people it’s everybody,” Gebergeorgis said.

The office will also screen the Oscar winning film “Selma,” in March; a recent film that gives America a crash course on the Civil Rights Movement from a black perspective.

“It is very beneficial for students here at NKU because the movie selections both talk about un-discussed subjects here at NKU. I believe this is the most subtle way of opening up the discussion of racism and white privilege,” Matthew White said.

Students who are black are speaking out how important Black History Month is for all races.

“I feel like it’s important, it isn’t just for Blacks. Black History is American History and it deserves to be remembered,” Khari Curry, junior nutrition major, said .

Overall, Black History Month at NKU is anticipated to be educational, and promote diversity within the student body.

“You just can’t pick one event over another, they all serve a purpose for this month,” Gebergeorgis said.