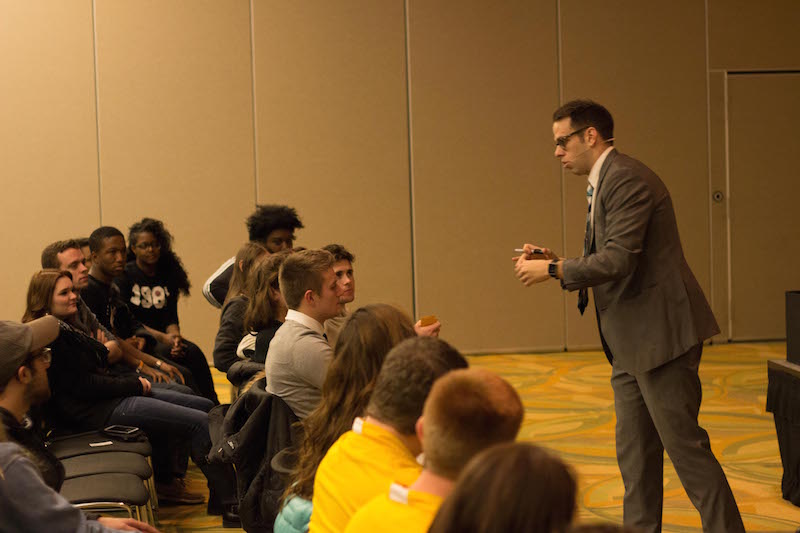 Mark Toland speaks to the crowd.

The event was the first of series of events planned and sponsored by the Activities Programming Board’s (APB), available to all NKU students for free.

Tanner Coleman from the APB hoped that bringing Toland to NKU would offer students an opportunity beyond entertainment.

“We saw that there was a chance to get Mark on campus and we wanted to surprise students with something different,” Coleman said.

Tonight was Toland’s first time performing in Kentucky and was excited to be at NKU.

Toland involved almost every audience member in one way or another.

“The idea is to guess what they’re thinking, a first crush, favorite city or maybe unlock their iPhone,” Toland said.

Audience members hung in suspense as he read the minds of participants and seemed to do the impossible in many ways, guessing birthdays, pass codes on iPhones and many other tricks, leaving the audience confused and baffled as they tried to catch on to his methods.

“The small crowd helps in these shows, you’re able to involve everyone,” Toland said.

Toland performed a number of mind reading tricks and drew conclusions based on peoples body language.

“I kept finding myself making my own conclusions and guessing which person he would pick or what card he believed the participant chose but I was wrong every time,” Cian McDonald, senior physical education major, said.

The quick-witted and hilarious Toland, kept the audience laughing and involved throughout the show.

“I loved how he interacted with everyone and came down off the stage, it really made me feel connected to what was going on,” Ellie Chancellor, sophomore musical theatre major, said.

Toland exhibited many tricks including guessing cards, birthdays, favorite cities, and even putting the passcode of his own phone into the mind of one audience member, leaving her perplexed as it how this could be possible without Toland using any words or actions.

“He put his passcode into my mind. Then just guessed my birthday,” Alaina Broderson, senior organizational leadership major, said. “I tried to go into standing up on stage and clear my mind and try get him to mess up, but you cant beat him.”

For many students, this first hand and interactive experience was something new. Throughout the show, jaws dropped and silence sat in the room as the audience waited in anticipation for the next revelation in the performance.

“It’s one thing to sit there and watch him do it but when he actually does it to you, it’s amazing,” Emily Powell, accounting major, said. “I never saw anything like that before.”

Toland will be going back to Chicago before getting back on the road on his tour of other colleges. But expressed his interest in returning to NKU at some point.

The mentalist’s tour events can be found on his Twitter: @MarkTolandLive and is also keen on Snapchat: marktoland.