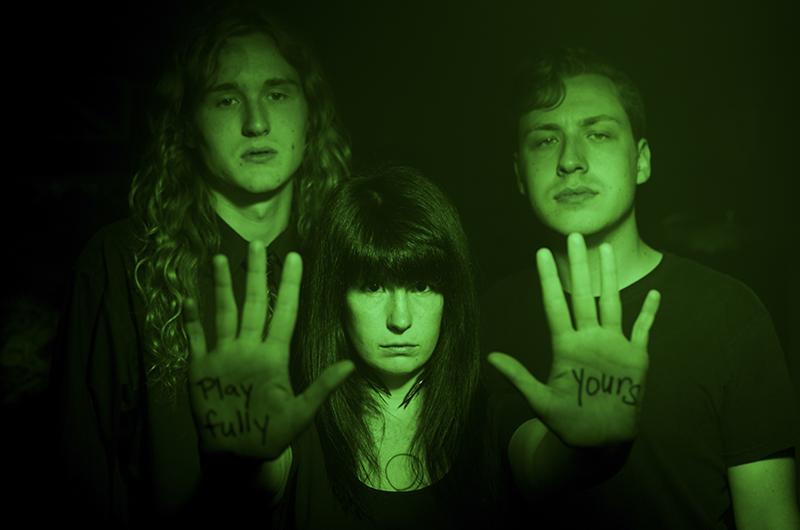 'Playfully Yours' (pictured above) has played in New York, Pittsburgh, and other cities.

Maxx and Brock McKinley are brothers, NKU alums and two of the three members of Playfully Yours, a band whose pulsing songs and memorable live shows have garnered them a strong presence in the Greater Cincinnati music and beyond.

Katie Busemeyer, fiancee of Brock, performs vocals and synths and writes lyrics for the band. She says that the band, which formed in 2011, came together on the heels of other creative endeavors between them.

“Initially Brock and Maxx were just making music by themselves and they were using records and splicing together samples, creating beats, all on hardware,” Busemeyer said. “And I was creating singer-songwriter style songs on an acoustic piano in my parents dining room.”

The first collaboration for the three came from a theater performance. Busemeyer performed in a play directed by Maxx, with lights and sound run by Brock.

“At the closing of that play, we were still creatively itching and we were sort of bored and we started collaborating,” Busemeyer said.

From there came Playfully Yours, originally named Stateline Execution, then later changed for a less harsh context.

With the exception of Busemeyer, who has classical training in piano and “some vocal lessons,” the members of Playfully Yours are not familiar with classical music technique.

Not wanting to let his music aspirations go to waste, Brock flirted with DJing. Upon being introduced to a sampler, which he describes as “basically like a digital tape recorder” and a way to arrange various sounds in various ways. His brother performs using a Kaoss Pad, a MIDI instrument which utilizes a touch screen interface to create sound.

The band places themselves in the “post-indie” genre, among others. Maxx explained that he believes post-indie is a natural progression of musical trends.

“I like this idea, what is after independent music?” Maxx said. “I think that this is the natural kind of progression, where it’s going to be people making digital music that’s performed with live equipment that makes it still have a signature live characteristic that changes from show to show.”

Since its formation, Playfully Yours has performed in New York City, Pittsburgh, Nashville, and Chicago. Maxx, was especially fond of performing in Elkins, WV, a town of a little over 7,000 people.

“They don’t get that kind of music through there,” Maxx said. “So when you can find these smaller cities where they just don’t have a lot of electronic music, that can be the best crowds to play to.”

The band members pay attention to audience reactions during shows. Brock notices people in the audience at shows, who will be dancing with their eyes closed. He refers to it as them “feeling the music.”

“There’s nothing that we feed off more than energy from the crowd,” Brock said.

A large amount of energy comes through from the intricate light shows, which the band plans out much like they would a song. Maxx aims for the light show is to have a strong, effect.

“Ideally while you are watching our light show you are visually aware of the pieces of our music,” Maxx said.

According to McKinley, the band has made some fans through the NKU community.

“We get some fans from classes,” McKinley said. “I’ve had teachers come and see me, which is always awesome.” The band also has performed in the Griffin Hall Digitorium and has been able to publicize their shows on campus.

“They’ve never torn down any of our posters that I’ve put up, which is awesome because I never get the OK because they’re always at bars,” McKinley said.

Responsibilities outside of the band, such as jobs and mortgages add stress to the members of Playfully Yours, particularly when it comes to getting out of town to play shows. Nonetheless, Busemeyer labels it as “a fun challenge” that they are starting to balance better.

Maxx says that the pre-existing relationships between the three have had a strong effect on the band’s longevity.

“I think this band would have broke up a million times before if we weren’t in the unique position where I’m playing with my brother and then my brother’s fiancee, who I’ve known for years,” Maxx said.

Currently, Playfully Yours is working on a download-only EP of song covers, and hopes to play out of town “as much as affordably possible,” including a possible West Coast tour. Music and upcoming show dates can be found at http://playfullyyoursmusic.com/.