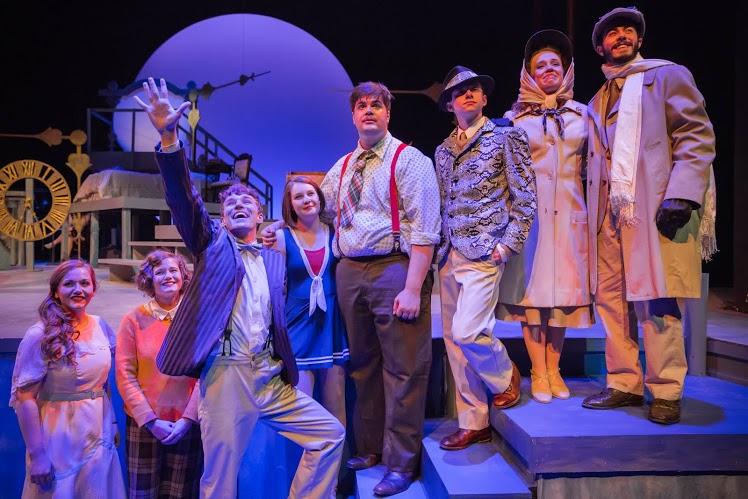 It’s 1928, and before year’s end Nelly, June and Gerty, the three Fail sisters, will all tragically lose their lives. But just because there’s tragedy doesn’t mean there isn’t some whimsical fun along the way.

“I really think it’s a true tragic comedy in the sense that I’m looking through this with a comedic lens and a tragic lens at the exact same time,” Corrie Danieley, the director of NKU’s final show of the semester “Failure: A Love Story,” said. “You’ll find when one of the sisters dies it’s humorous and tragic at the same time. And I think that’s just life, you have to find that balance of those things.”

“Failure” is a fairly new play. Written by Chicago native Philip Dawkins, the play follows the Fail sisters and their family, a family that happens to include a few talking animals and clocks.

“The story itself is just so whimsical, it’s kind of magical. It’s just really, really fun,” Victoria Hawley, who plays eldest sister Gerty, said. “I couldn’t imagine myself doing any other show this semester.”

Danieley discovered the show in the summer of 2013 after a friend working at the Illinois Shakespeare Festival produced it. She read the script and immediately knew it was a play she needed to produce.

“When I got the script I fell in love with the story, I just thought it was so sweet and charming,” Danieley said. “It’s quirky and whimsical, there’s a little bit of everything. Plus I just love that time period, the romanticism of it.”

Danieley also loved the play, which features some music, because of the freedom the script granted her. The script of “Failure,” which takes place largely in the two-story Fail home and clock shop, gives no specifics on the look of the set. Since there was no detail on the look, Danieley credits the creative team with really taking on the challenge of dealing with what she calls “magical realism” like making the animals talk.

“It’s been fun, it’s definitely challenging when you’re in magical realism where there’s so many options,” Danieley said.

The other aspect of the play that the playwright left out was the use of narration. In the piece it’s not specified who the narrator is. For this interpretation Danieley chose to use three characters she calls ‘the three graces’ named Beauty, Charm and Creativity. Each of those graces represent an important aspect of the sisters’ personalities as they guide the audience through the story.

“They’re super cool characters and they kind of represent little parts of each of the sisters,” Hawley said. “It’s the way they tell the story, but also the way we as an ensemble tell the story.”

The ensemble, which consists of 16 cast members, five of whom change character multiple times throughout the story, have been giving it their all in rehearsals, according to Danieley.

“I’m really proud of my cast because I’ve approached this show in a new way as a director,” Danieley said. “I’m trying something new, I’m risking. We’ve done a lot of improv and exploration to create a tight ensemble. And the cast seems to really enjoy it.”

Danieley has also been impressed by the ‘heart on his sleeve’ performance that male lead Hunter Henrickson has been giving. According to Danieley he’s been leaving it all out on the stage emotionally.

“Emotionally he’s all over the place,” Henrickson said of his character. “He really takes on a strong range of the emotional spectrum and human spectrum. To get that effect I’ve used a lot of the techniques that Corrie has implemented into rehearsals.”

While working on his own performance Henrickson has also loved watching the ensemble.

“Everyone wears multiple hats literally and figuratively; we really form an environment together,” Henrickson said.

Aside from the many choices it provided, Danieley was also drawn to the piece because of the whimsical qualities. Danieley has a five-year-old son who has remained her inspiration to keep those magical qualities strong in the play.

“His worldview right now, he’s so curious and I think that’s a big part of what theatre is – curiosity,” Danieley said. “Also that so many mundane things in life are magical to him; he’s been inspiring me throughout.”

Hawley was also inspired by people in her life to take on the role of Gerty, the longest living sister. Hawley has two younger brothers, whereas Gerty has her two younger sisters. Much like Gerty though, Hawley sees herself as the caretaker for her brothers.

“And I love my two younger brothers and I felt like I could infuse that love for them into Gerti’s love for her two sisters,” Hawley said.

The show opens this week and both Danieley and Hawley are ready to share the tale with an audience.

“I’m just super excited to share it with everybody. We’ve been working so hard and Corrie has presented us with so many cool ideas,” Hawley said. “I think it’s going to be something really special for people to see.

Danieley is looking forward to seeing the audience connect with the story and its themes.

“I feel like so many of us can relate to love and the fact that time is so fleeting and death and grieving,” Danieley said. “I just hope that the audience comes with an open mind and are eager to see something new.”

For Henrickson it’s been a joy watching the cast grow together and he can’t wait to share that growth with the audience.

“Watching everybody kind of come into their own. There isn’t one person in our cast that hasn’t grown exponentially since day one,” Henrickson said. “From day one we’ve been excited to open…it’s really been our baby.”

“Failure: A Love Story opens in The Corbett Theatre on Nov. 20 and runs through Dec. 7 with a break in shows during the Thanksgiving holiday extended weekend.