Student play debut is as unexpected as its playwright 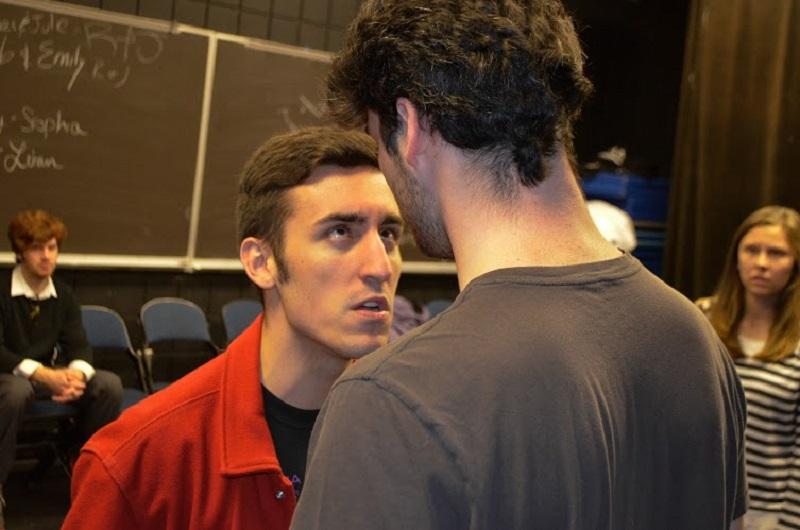 In the Fine Arts building, down an inconspicuous hallway is room 307. This small, unassuming room with modest lighting and limited seating allow actors to bring to life the inner thoughts of a playwright, but what sets this stage apart from the others on campus is the play performed in this room was written by a student.

Robert Macke, senior playwright major, began writing his play, The Road through Damascus, while volunteering as a cold-reader in Brian Robertson’s playwriting class and then finished the script for his own class.

“An assignment was due in a couple of weeks and, I couldn’t think of anything so I started writing,” Macke said. “I ended up with this and people told me it was good.”

Macke then leaned in and laughed enthusiastically as he said, “I hope people understand that this,” he gestured to himself meaning being a playwright, “this was an accident.”

In Macke’s freshman year at NKU, he was involved in the production of Thornton Wilder’s Our Town which Macke described as Wilder’s “love letter to the every man.”

“I really loved that show,” Macke said. “It stuck with me.”

As a freshman, Macke’s sights were set firmly to be in the spotlight but things didn’t go according to plan.

“I was young and plucky,” Macke said. He firmly believed he was going to light the acting world on fire so after doing a few plays, he applied for the BFA in acting but wasn’t accepted.

“I failed,” Macke said as he shrugged his shoulders, “and that got me thinking. What if I wasn’t supposed to be an actor?”

“Should I just go and try to become a chemist or something?” Macke asked Jones even though he’d never taken a chemistry class in his life and Jones said he’d heard about Macke’s play from Robertson and suggested Macke should go for playwriting.

According to Macke, writing had always been a part of his life but he had always wanted to be an actor.

“Finally I had the wakeup call that I’m not God’s gift to the Earth in acting,” Macke said.

“I love acting but I’m better at writing…and I’ve had a lot of fun on this side of the experience.”

Macke said that people should know that even if they’re not good at this one thing that they love, it doesn’t mean they can’t end up loving what they’re good at.

“We are obsessed as a culture right now to say…everyone is special in their own special way [but] we don’t all get to be special,” Macke said. Some people are just going to be the extras in someone else’s life and that’s okay.

Macke said this realization was something he’s been trying to come to terms with and that struggle comes out in his writing.

Director Nate Netzley, said this piece is Macke’s own love letter to Thornton Wilder’s Our Town.

Netzley graduated from NKU in May and came back to direct this play, partly because Macke asked him to, but also because he felt this play had something special.

“I hadn’t really seen [a script] this strong since my freshman year,” Netzley said. “They’ve all been strong but this one has been the strongest I’ve seen in the bunch.”

Netzley said doing a new script and having a flexible playwright gives the cast and crew a chance to explore the script and play around with it.

“We get to be the first to test-drive this play and to see what mileage it has and where it goes,” Netzley said.

Alexx Rouse, junior playwriting major, who plays the character Bessy and serves as the narrator said she was excited to be a part of the cast.

“I love my character because…she’s incredibly complex,” Rouse said. “There’s so many different things that she gets to do and play around with.”

Rouse has been with this play since it began taking form in Macke’s playwriting class and has enjoyed seeing this play become a reality.

“It’s been a really awesome experience to see it go from a seed of an idea to a living, breathing performance,” Rouse said. “That’s been amazing.”

The play follows the same three-act structure as Our Town although it’s a one act play.  It’s broken up into thirds; daily life, love and marriage, and then death.

Death as a theme

“I’m very loose with death and the sentiments towards it,” Macke said and the reason death is such a dominant theme in the play is because, as an atheist, Macke believes that when he dies, he’ll “just be resting in a hole.”

“One thing that drives me to playwriting,” Macke said with a small lump in his throat, “is it helps me cope with death.”

Macke heard a quote where someone said everyone dies twice; the first time is when you physically die and the second time is when they utter your name for the last time.

“With that in mind,” Macke said, “Shakespeare hasn’t died yet.”

He then looked at the black leather binder he’d been holding the entire time and said in almost a whisper, “This is my play.”

He gripped the binder with both hands and said, “It’s in here. This is my play. This has my name on it.”

Macke paused for a moment and then gripped the binder in his hands as if trying to protect it.

After he took a deep breath, he said slowly, “I might live, you know, after I die. This,” he shook the binder to emphasize the play, “this will be my afterlife.”

Then Macke shrugged and said, “But no, that’s bullshit.”

Macke laughed a bit to himself and said the final monologue basically says, “It was a nice coping method but no, you’re dead and you’re not living through this.”

As a person who is writing new theatre, it’s not surprising that Macke said people need to, “see new theatre,” but it’s not just to get people to see his show.

“There are certain shows that are the…pizza of theatre,” Macke said. “When it’s good, it’s amazing and when it’s bad, it’s still pretty good.”

Macke said it’s okay to see your favorite shows or the classics but it’s important to remember to see the new shows.

“See who is doing theatre now,” Macke said. “See the shows that are going to be the classics when you’re 50.”