NatGeo photographer Michael Nichols talks about the value of collaboration 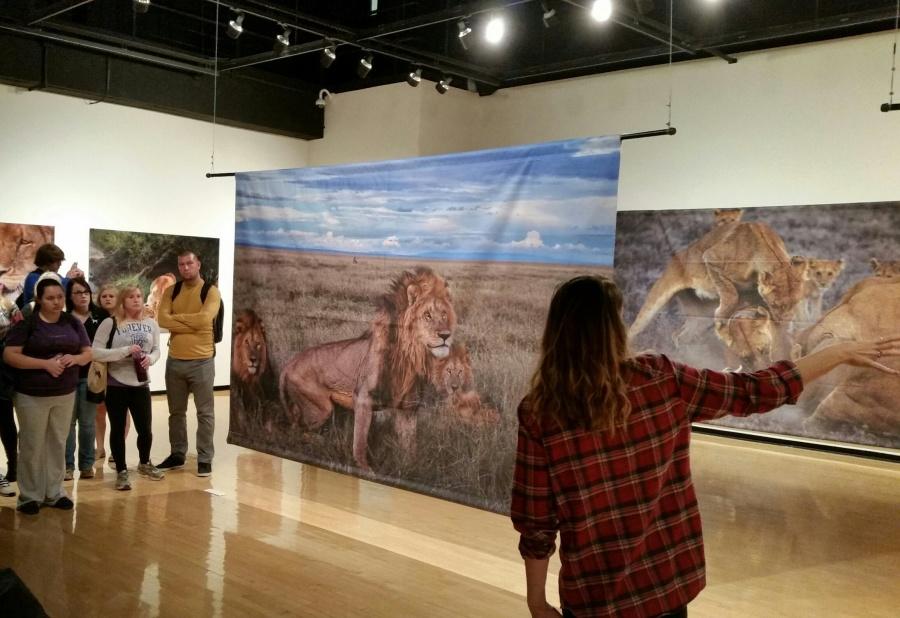 The room darkened as National Geographic photographer Michael Nichols took the stage at Greaves Hall the night of Oct. 15 to showcase his works to the NKU community.

“Everything I’ve ever done is a collaboration,” Nichols said in his opening remarks.

He then played a video that described the process of how he captured a tiger leaping from cliff to cliff in a photo.

Using motion-sensored “camera traps,” Nichols, along with a team of photographers, was also able to produce a rare feed of the tiger relaxing at the water hole.

Nichols also talked about falling in love with gorillas, the first wildlife animals he worked with, when he photographed for George B. Schaller’s novel, “Gorilla: Struggle for Survival in the Virungas”.

“Once I convinced myself the work mattered, somewhere along the way with the gorillas, I just became this maniac,” Nichols said.

After that Nichols got to work with famous primatologist Jane Goodall for a couple of years, who saw his photography of the Virunga gorillas.

The photos he took later accompanied her text Brutal Kinship.

Nichols also talked about his documentary expedition of the African rainforest with Mike Fay, a conservationist who walked 2,000 miles barefoot from the Congos to Gabon.

“One thing I learned is the power of collaboration. If you can collaborate, please do,” Nichols said.

Through collaborating  with several people he created a picture of a 3,000-year-old giant sequoia tree, comprised of 126 images for the front page cover of a 2012 National Geographic article called “The World’s Largest Trees.”

The rest of his lecture described Nichols’s work with lions, elephants and bears.

The gallery, which showcases his work “The Short and Happy Life of a Serengeti Lion,” will run until Oct. 24.

“I loved how he’s so down-to-earth and so honest about his work and he’s willing to answer questions,” senior anthropology major Erin Boone said.

Because Boone is really interested in primatology, the study of nonhuman primates, she said she thought it was neat that Nichols got to work with Jane Goodall.

“I also love what he said about collaboration, that you have to get outside the box, meet people, talk to people, work with people, which is very true,” Boone added.

Third-year photography major Tanner Ross said he enjoyed the speech, although he wasn’t too keen on the lion feeding video included in the lecture.

However, Ross did learn several techniques that will help him with his own photography in the future.

“Well, he pointed out that since he does wildlife photography and the sorts, he said that sometimes he can’t go after the subject himself. He has to wait for the subject to come to him,” Ross said.

“There were some subjects that wouldn’t let him get as close as he would like,” he added.

Additionally, he said he learned about how Nichols used motion sensored cameras to help him capture the subject when he wasn’t around.

“It’s also a great way to view the subject doing what it would normally,” Ross said.

Nichols, who has photographed 26 stories for National Geographic Magazine, came to NKU from Yellowstone National Park where he has been since March, photographing wolves, bears, their habitats and the tourists who visit.

“Every day that I’m out there, I think I’m the luckiest man on Earth,” Nichols said.

Nichols plans to finish this last project around next May, and his photos will be published for National Geographic’s November 2015 issue.

Nichols said he enjoys his job “like crazy,” however, he can’t relax.

“It’s just God’s gift that I do this. I take that seriously so I work myself to death. I feel like I’m on a mission,” Nichols said.

According to Nichols, he’s going to stop being a National Geographic photographer after the Yellowstone project and do something different with his life.

“Now, that doesn’t mean I’m going to die,” Nichols said. “I’ve just done it for 40 years and it’s been intense all the time. You’re always on the job.”

However, he said he does feel it’s a huge privilege to do the work that he does.

“It’s an incredible thing that you guys are moved by it,” Nichols said.