Wii U hits the Game Room 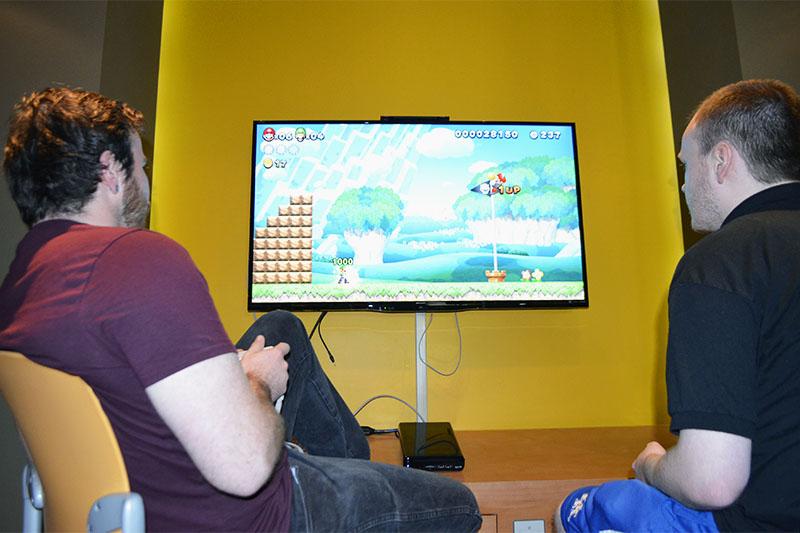 Two students play Super Smash Bros. U in the game room at NKU.

With the arrival of Nintendo’s Wii U, NKU’s game room has its first next-gen console. In a room bustling with XBOX 360s and PlayStation 3s, it’s a breath of fresh air.

“Nintendo has always been big on-couch co-op,” said student Josh Lawson. “This is something the other two console [manufacturers] are lacking in.  Nintendo excels at making a family system that appeals to everyone…games like Mario Kart and Smash Bros.”

With New Super Mario Bros. U already in the game room’s library, the game room has a good understanding of what players want.

When looking at the XBOX and PlayStation game systems, established franchises like Super Mario, The Legend of Zelda, and Pokemon can’t be found. And Nintendo makes games that are only found on Nintendo systems.

Finding a game that fits the game room isn’t as simple as saying “Skyrim’s popular – buy that.” “You’d think that would be the case, but it’s not,” said game room employee Chris Ortiz. It can be hard for single-player games to really stand out, while multiplayer titles are an easy sell.

As Ortiz notes, “Mario Kart is a [five-year-old] multiplayer game that still sells on the Wii. Getting the Wii U version would be the best course of action.” Boasting new characters, new maps, and upgraded graphics, Mario Kart 8 makes the Wii U that much more enticing to the game room.

Games like Mario Kart have a much longer shelf life than those like Madden or Call of Duty. While the latter two come out every year, you tend to see Mario Kart games every few years, with radical changes added to each iteration.

While having a relatively small library composed of mainly Nintendo games, the Wii U features many different controller options. Wii remotes, the Wii U tablet, and Wii U controllers work with Wii U games. Super Smash Bros. for Wii U will even support GameCube controllers and the Nintendo 3DS.

People have been buying Nintendo systems for Nintendo games for a long time now. For many, it’s simply a matter of quality versus quantity. The only dilemma is that the Wii U’s library is far from abundant. Few games ever reach the anticipation you see from Mario Kart or Super Smash Bros.

The game room currently has New Super Mario Bros. U and New Super Luigi U, two cooperative side-scrollers in the vein of older Mario games. These games boast fun, cooperative gameplay and are a great way to show off the Wii U.

There are plenty of other games that gamers are interested in. Josh Lawson notes, “Hyrule Warriors is a must, but games like Nintendoland are great showcases of party games on the Wii U. And of course Mario Party.”