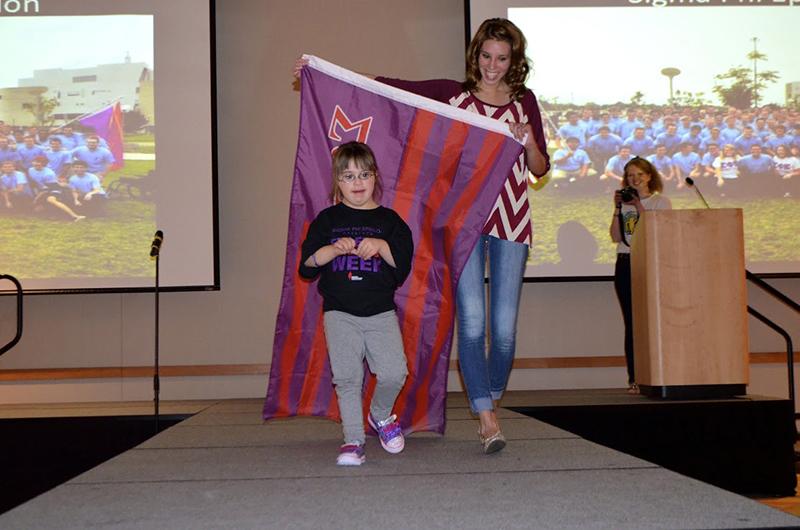 Step aside New York, because NKU has a fashion week of its own. On Wednesday night, Best Buddies hosted a fashion show to showcase the organization to NKU’s campus.

The fashion show starred local buddies who deal with intellectual and developmental disabilities. Numerous organizations from NKU collaborated with the models to choose a look that represented their organization.

Each model showed their own personality as they strutted down the runway. One of these models, 19-year-old Katie Malott, felt the pressure before she got onstage.

“I am so nervous,” explained Malott. “But my parents are here and I know that I have to have a good pose for pictures.”

Caitlin Roberts, senior elementary and special education major and president of Best Buddies, said the goal of the fashion show was to endorse equality.

“We want to promote inclusion in general, because a lot of people just don’t know about disabilities or are uncomfortable with the topic,” Roberts explained.

This mission was one other organizations on campus, like Colours of Pride, believe in too. Marcel Hughes, junior social work major, feels that representation of different groups is a value both Best Buddies and Colours of Pride share.

“It is important to shine a light on marginalized groups whether it be those with disabilities or the LGBTQ community,” said Hughes.

During the show, Best Buddies took the opportunity to share with the audience some things that the club hopes to accomplish. This included ending the use of the r-word. The “Spread the Word to End the Word” campaign was a highlight of the night to Roberts.

“It is important to me that everybody stops using this word, because it does hurt people even when someone uses it without directly calling someone that it is harmful,” said Roberts. “I try to not to just leave it at ‘don’t use that word’ but instead explain why it is wrong.”

In addition to the organizations that adopted buddies for the night, other groups on campus contributed to the show. Tonality, an a cappella singing group, opened the show by singing the national anthem and an improvisation group called Self Impov-ment provided entertainment during the intermission.

Roberts hopes to make the fashion show and annual event to raise even more money for the organization’s other activities.

“Our goal is to do this again next year and spread the word about what we do even further,” said Roberts. “We want to be able to host other events like a friendship walk in the spring.”

“To see other organizations getting involved in what we are passionate about is heartwarming to us, and it is because of the effort that they made that tonight turned out to be so great,” Buchanan said.