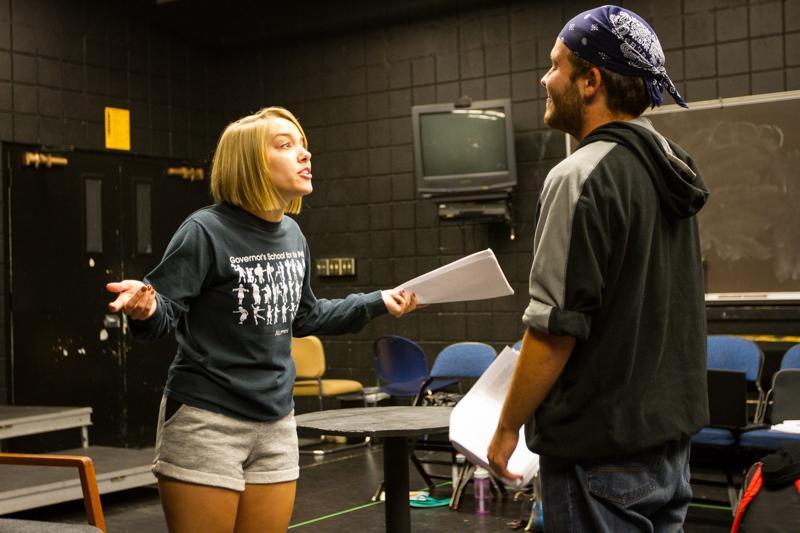 This secret is Studio 307, also known as the 307 Series, which is a completely student-run series of stage productions tucked quietly away in Fine Arts’ room 307. The cast, director, and stage managers are all students with the exception of their faculty supervisor, Brian Robertson.

“Studio 307 officially began in the Fall semester of 2007 with a production of Angels in America,” Robertson said. “At that time room 307 looked much like room 311 with carpeted floors and classroom chairs scattered about. The blue ones that make up the house seating today. The tech table, floor and lighting package/grid was introduced by the fall of 2008.”

The main reason for the development of Studio 307 came from the students themselves, who were seeking to improve their skills outside of main stage productions and work on them independently.

“Studio 307 was developed to address a faculty concern with a growing interest in student productions that were moving away from TGIT (Thank Goodness It’s Theater) and seeking performance space in Stauss and Corbett,” Robertson said. “It was felt that an idea was needed to better organize student interest and diffuse scheduling conflicts with the main stage theatres. I volunteered to develop a proposal…after it was accepted, I became the faculty supervisor of Studio 307.”

The 307 Studio is funded by Center Stage Player (CSP) and each production is always free, but they do ask for donations.

The Heidi Chronicles is the play currently in production in the studio. Co-Producer and senior BFA Victoria Hawley is the director for this production. Hawley discovered the play her freshman year from friends taking the race, gender, and theatre course.

“I read through it one night and I was like, ya know, I kind of really don’t get this play, like, it’s really deep and complex in the historical sense and I don’t understand all the references,” Hawley said. “But the scene that really stuck with me is the second to last scene in act two, the scene between Heidi and Peter and just the way it was written, and how raw and beautiful it was and how clear their friendship was. It just spoke to me really, really deeply.”

Hawley was in a Studio 307 production at the time and that’s when she decided that she wanted to direct this play when she got older.

“I’ve been kind of sitting on the play for four years now,” Hawley said.

Each rehearsal has taken place every week since school started. Rehearsals take place in the studio room itself.

Scene 3, rehearsed last week, begins with folding chairs placed in a circle in the middle of the room with an all-girl cast. The setting was a sort of women support group filled with sassy comments, witty comebacks and snarky jokes. Heidi was dragged into the group by one of her friends.

“I also really identified with a lot of the struggles that Heidi was going through,” Hawley said. “Her story is what drives the show and I think she’s super relatable to all people that come see it and that’s really special, I think.”

In the play Heidi’s journey begins when she is a 16-year-old and continues to when she is a 40 years old. The play takes place between the 1960s to the 1980s.

The lead role of Heidi is being played by senior BFA dance major, Molly Watson. This is Watson’s second 307 show and she has also taken part in several main stage productions at NKU.

“I chose to do Heidi because one, Victoria called me back and I thought that working with Victoria would be really rewarding for me,” Watson said.

The male main role of Scoop, an arrogant editor of a newspaper who wins Heidi’s heart, is being played by junior theater major, Tony Newton. This is Newton’s first 307 show, but he has taken part in many different productions on campus.

“The mainstage shows are, well, the mainstage shows. It’s faculty directing it and there’s control by the faculty,” Newton said. “But the 307 Series is run entirely by students and it’s more of an avenue for students to do their own projects.”

The Heidi Chronicles will open Oct. 1 in room 307 of the Fine Arts building on NKU’s campus. The cost is free, but donations are accepted.

“We’re about ¾ of the way through,” Hawley said. “I’m so proud, they’re working their butts off.”