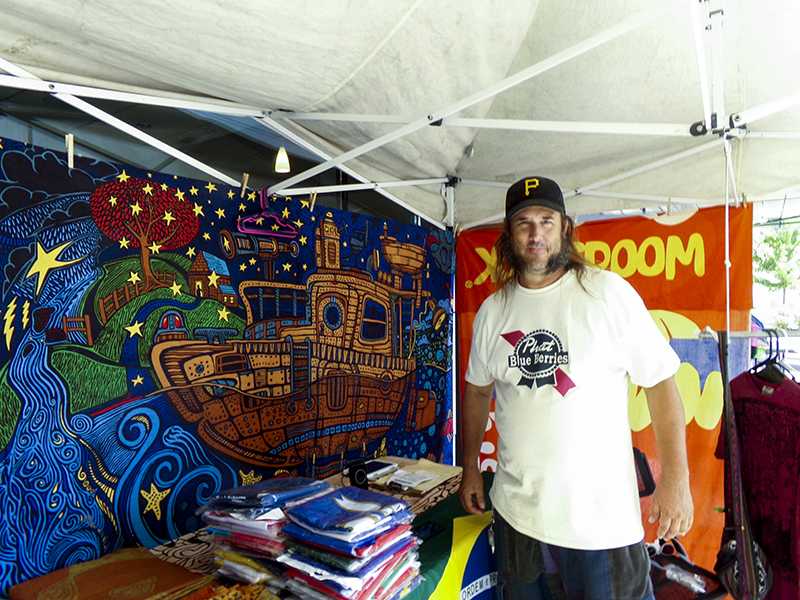 Tye Dye Thom satands with his merchandise. He raises money at his booth and donates portions of it to the Panahellenic group, which supports 26 sororities.

An array of colorful tapestries and tank tops fill a booth outside the Student Union several times a year. You have seen the vendor selling his merchandise in the spring and fall to NKU students and faculty. His name is Tye Dye Thom and his Facebook friends know him as “Quarry Breakdown” and he has a much bigger purpose than just selling his bright displays of fabrics.

Thom has been visiting NKU’s campus since 1999. Although he visits other campuses across the country, he returns to NKU because of the message of independence he hears on campus.

“We [NKU] want you to be who you want to be,” Thom said. “We’ll fight for your independence.”

Thom said that NKU is in his top five best universities he visits and that it may even be his number two or three.

“Students come in with their parents’ views and beliefs, but they leave here with their own,” he said.

As a strong advocate for students forming their own opinions and ideals, Thom’s business supports the Panhellenic council, an umbrella organization for 26 different women’s fraternities and sororities. Thom has worked with Panhellenic for years because he strongly believes in women’s rights and leadership.

Thom said he does not help the Panhellenic at every university he visits. The money he makes usually goes back to that school for them to distribute however they wish. Two universities that allocate the money to a specific cause are Grand Valley State in Allendale, Michigan which goes toward Crohn’s disease research, and Michigan State, for the activities board.

Thom got his start in sales while attending the University of West Florida. He and his friends decided to take a trip to New Orleans where he met a man who owned a jewelry booth. Thom had been making hemp jewelry at the time, and eventually just took over the man’s booth.

His nickname comes from a young Vietnamese woman who met him at this booth. Thom rode a motorcycle, and her son had died in a motorcycle accident. This woman took a liking to Thom, and began stealing his motorcycle key out of concern for his safety. After he found out what she was doing, she offered him an employee, a free space to sell his jewelry, and a dolly to transport his merchandise, if he stopped riding his motorcycle.

After that, the woman told him that he was henceforth known as “Tye Dye” Thom.

Thom hires student workers to help run his booth for eight dollars an hour. Sometimes these workers offer Thom a place to rest during his travels.

“He is a friend, he stays with my brother when he comes through,” Justin Wynne, one of the student workers and fellow ATO brother said. “He has a tradition of staying with brothers in the area.”

Wynne said that Thom will be traveling to Denver next.

Tye Dye Thom’s booth will return Oct. 6 to NKU, and again in January, where he will sell metal rings and jewelry.