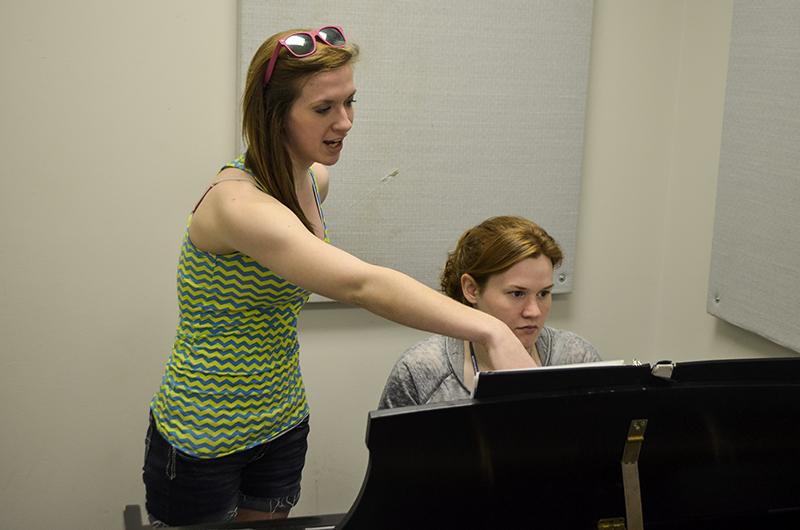 It is 8 a.m. on a Friday and the second floor practice rooms of the NKU Fine Arts building are almost all available. That is good news for senior music performance major Chris Lawrence. His classes for the day, Aural Skills and Conducting have been cancelled, so Lawrence now has more free time to practice his guitar than he otherwise would.

However, moments such as Lawrence’s Friday morning are not as common as he and others like him might like, as one of the chief stressors for music majors is the availability of practice room space and practice time.

Music students are expected to gain proficiency with their instrument or skills, but students feel that there are not enough practice rooms on campus to adequately fit their needs.

Matthew Louis, a freshman on the music performance instrument track who plays bass, finds there to be a lack of space, both in terms of physical space and in their schedules.

“There really aren’t enough hours in the day including your other core classes that you need,” said Louis, who recently sent an email to the department chair about the issue of space. “In addition to classes outside of your curriculum that you have to do, and even if you try to practice here, you have to compete with other students in the building or on campus that use our practice room.”

One of the biggest competitors for practice room space is students in the theatre department.

Izy Jones, a freshman jazz studies major says it is difficult to accommodate both the music and theatre departments with the current amount of practice rooms.

“As much as we support the theatre, they need their own practice rooms, or we need more,” Jones said.

When there isn’t practice room space available, students sometimes have to get creative. The common area outside of the practice rooms is used as a backup space for practice. Doing so has garnered some scrutiny, according to Dorothy Van Huss, a sophomore music education major.

“We’ve had people complain about people practicing out here even though it’s not very loud,” Van Huss said. “It still kind of has a certain look of ‘why aren’t you where you’re supposed to be?’ I guess.”

Music department chair Kurt Sander acknowledges that there is a “deficit for practice rooms.”

13 are currently available, including four added to the third floor, about three years ago. The National Association of Schools of Music, the department’s accrediting body, estimates the practice room capacity as 17.5 students per room, which Sander says is far below the recommended capacity.

Implementing separate practice spaces for music and theatre students would take some planning, according to Sander.

“We as well as musical theatre are noisy and any kind of space would have to be acoustically treated so as not to cause sound bleed,” Sander said.

Despite all the stressors that come with being a music student and the various grievance that they have with the department’s accommodations for them, the dedication the students have toward their craft seems to far outweigh all the negatives.

“Everybody has a passion that drives them in life,” Louis said. “It would just be nice that if we here in the music building had the accommodations as everyone else on campus.”