The world may be a stage, but someone needs to dress it 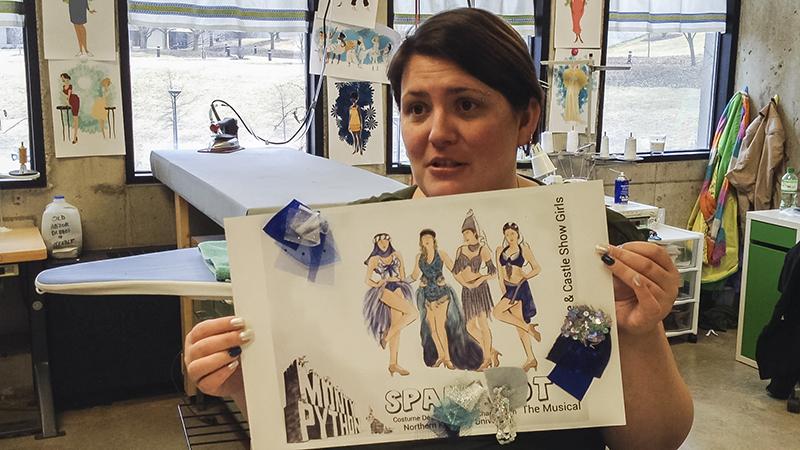 Ronnie Chamberlin holds up one of the designs for a Spamalot costume.

The steady beat of a sewing machine fills the air. Rat-tat-tat-tat-tat. Across the room, someone hand-glues jewels onto a belt while someone else makes a sequined headband. Sitting off to the side is a fruit hat complete with a pineapple, banana and grapes.

You never know what you’re going to find in the NKU costume shop.

Ronnie Chamberlain became the new assistant professor of costume technology, design and makeup at NKU in March and has been reigning in the organized chaos ever since. She said each show has brought its own challenges.

“There’s no permanence in my life,” Chamberlain said.

She explained that since each director’s vision of a play is different, even if they did the same show, the costumes would be different every time.

“All the artistry is the same, but the stories and what I’m creating is different every time so the variety…and the possibilities are endless,” Chamberlain said.

NKU’s costume shop is a Wonderland-maze of exciting things.

“In four or five years, I’ll know where everything is in here,” Chamberlain said. “I will have absolutely every item memorized, but for now, I rely on students who have been here for several years and the shop manager.”

In the shop where the the costumes are made, the room is alive with activity from employed students, volunteers and others, especially in the weeks leading up to a show because it takes many hands to get all the work done.

Alecia Hellkamp, a freshman BFA costume design major, worked on just one of the Lady of the Lake’s many costumes for Spamalot.

“To be able to make something out of nothing and then actually see it [on stage]…is really exciting,” Hellkamp said.

Brittany Olvera-Vancini, a senior theatre design major, also worked on costumes for Spamalot, including hand-gluing jewels onto bluish-green wigs worn by the Lady of the Lake’s Laker girls.

For Spamalot, Chamberlain said there were about 180 costumes that were worn by 25 people, but they changed their clothes so often. Many times, the costumes will only be on stage for one scene.

“It’s not just what [the actors] wear, but how they wear it, how they get it on and off and the story they tell,” Chamberlain said.

The designers consider everything.

“Their underwear, their earrings, their hair, their eyebrows, facial hair, everything is a decision that comes through the designer,” Chamberlain said. “The actors eventually get their bodies back after the show is over.”

Monty Python’s Spamalot is NKU’s latest production and just ended on April 27, but Chamberlain has been working on the show since last October.

“We average a show coming in and out of the shop here at three to four weeks, depending on the show, but the show started long before it gets here,” Chamberlain said.

She explained that a show starts with the director and how he/she envisions the show telling the story, and then the director works with the artistic team to bring that story to life.

“All of [the designers] specialize in our area and we bring that specialty to the table, and then the director helps us rearrange all the pieces so that they fit together seamlessly,” Chamberlain said.

For the show Spamalot, a lot of the images you see on stage were already created by the Monty Python’s crew, Chamberlain explained, and the artistic team wanted to stay true to those iconic images.

“There’s no reason to reinvent the wheel,” Chamberlain said. “We’re giving that [movie] experience back to our audience, just live on stage.”

At the same time, there was a lot written into the show that was never seen in the movie, Chamberlain said, including the Lady of the Lake.

“She’s present throughout the [show] but not in the movie,” Chamberlain said.

There are also a lot of Vegas references in the show with everything from showgirls to chip-n-dale dancers to a lot of glitter and bling.

“Even though it’s true to the movie, there’s no sequins in Monty Python’s,” Chamberlain said. “However, this show is throwing up sequins left and right in true Vegas fashion.”

That’s one of the best things about this show, according to Chamberlain.

“The gimmick, the laugh, and the puns are dictating the show so it’s sexier, funnier, more Vegas, bigger jokes, more sequins and it just builds up until it explodes and that’s really the goal of the show,” Chamberlain said.

Chamberlain, who is new not only to the theatre department, but also to the NKU community, has been amazed at the “level of professionalism and artistry” and is very excited to continue being a part of the creative team.

One thing she recommends to those who come to see the show is to go and see the stuff you don’t think you’d want to.

“We all want to see the comedies and…the fun stuff, but sometimes the power of art and the power of theatre is how it makes us think about our own lives and about ourselves,” Chamberlain said. “I would encourage you to get out and seek those opportunities because…sometimes those other shows are the ones that really make the best impact and they’re not always the ones we put on our calendar.”