Norse Commons employee deserves a ‘Pat’ on the back 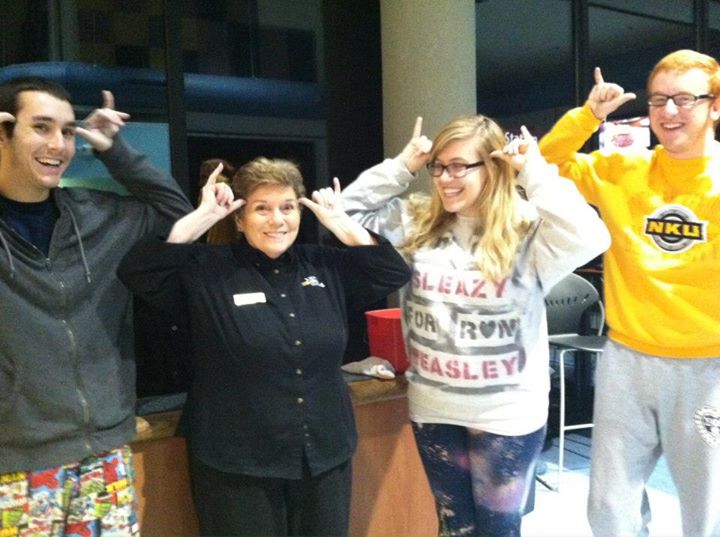 From left to right Matt Hepner, Mary Pat, Emily Ries, and Taylor Dwyer throw their Norse Up in Norse Commons.

In Callahan Hall’s white walled residential dining hall, Callahan Bistro, numerous conversations float around the room and silverware clicks against plates. Some students read quietly or look at their cell phone while others joke with friends as trays littered with scraps sit in front of them. The fluorescent lights bathe the windowless room as the sound of students entering the building echoes into the dining hall.

As these students enter for dinner, cashier Mary Pat smiles as she swipes their AllCards and greets each one by their first name. She said she started remembering first names for the students. It was a polite thing to do, but she also knows it will help keep her brain alive and sharp.

“Your mother liked that name,” she said. “She gave it to you for one reason or another.”

Mary Pat’s full name is Mary Patricia Kremer. She has always lived in Campbell County; mainly in Bellevue, but also in Newport and Dayton.

The name Mary Pat was given to her when she was starting to work banquets at the convention center. While filling out her paperwork she put “Pat or Patty” behind “Mary” as a way to indicate a nickname her family and friends gave her. When given her nametag, it read “Mary Pat.” She tried to get it changed, but the name ended up sticking within the banquet circle she was working.

Despite having a few other jobs such as a dental assistant, Mary Pat said she has been serving food since September or October of 1964.

“I’ve been serving people since they called them waitresses,” she said.

Her first job waiting tables was at Crystal Chili Parlor on Monmouth Street in Newport, which is now Gourmet Chili.

Mary Pat took the job after getting divorced from her first husband. She had a baby and working nights at the chili parlor allowed her mom and stepdad to watch her young son so she could make money.

Starting to work at NKU

After all the years of serving and carrying heavy trays, her shoulders started to go out and she was placed on a weight limit for how much she could carry after having a replacement surgery.

Not long after, Mary Pat found herself working for the company Chartwells. The company moved her to work at NKU four years ago in Norse Commons, before being moved to Callahan Hall when it closed for renovations.

“They needed to find a spot for me and they brought me over here with all you kids,” she said. “And I stuck and I’m still here.”

Melissa Pompa, regional district manager for Chartwells, said that moving the staff from Norse Commons to Callahan Hall was intentional to give the students a sense of normalcy during the renovations (which are expected to be completed in August).

There are differences between serving college students and adults in banquet settings. After starting at NKU she wondered how she was going to adjust. Previously, she would check in on tables and not talk too much as to not disturb a meeting or conversation.

“In here, sometimes all hell breaks loose. You know, sometimes we get loud and woolly in here,” Mary Pat said.

Students showed their love and appreciation of her last year on her 72nd birthday.

Edwards and other residents put together a large poster-board card.

“We went around the Student Union the day of and got probably 100 students to sign the card,” he said.

About 6:30 that night in Norse Commons, they got even more students to sign the card and even sang to her after presenting it on her usual evening shift.

“When I came to work here I got 500, at least, new grandchildren,” Mary Pat said.

Outside of NKU, she has 13 grandchildren and 11 great grandchildren. After being divorced for about 15 years, she remarried Jerry Kremer, who has since passed. He had four daughters when they married she said.

Pompa said she would encourage anyone who dines at NKU to have the “Mary Pat Experience.”

“For me the Mary Pat Experience is warm, friendly, and like having a mother or grandmother here on campus,” Pompa said. “For those away from family, they feel like they’re coming home.”

As students leave, they wave goodbye. If they decide to eat in Callahan Hall, there is a good chance they will see each other tomorrow.

Mary Pat said that she really tries to talk to students like a grandmother.

“I try to make them feel at home, comfortable, and listen to them,” she said. “I try to ask everybody ‘how are you doing today?’ and I listen to them when they’re not doing okay.”

Sometimes they just need to get it off their chests, she added.

One student who has spent time talking to Mary Pat is Charles Edwards, a senior communications major. She calls him Charles since that is his full name, but he goes by Chaz.

“When you’re a freshman, you’re awkward and don’t really know anybody,” Edwards said. “She makes it more like home. She’s like a grandmother.”

Edwards moved into NKU’s dorms from Frankfort and said he got to know Mary Pat by coming into the Norse Commons every night. She was always smiling and wanting to know what was going on in his life, he added.

Pompa said she is popular and important to student residential life because they need a support system and a friendly face to give them a home away from home.