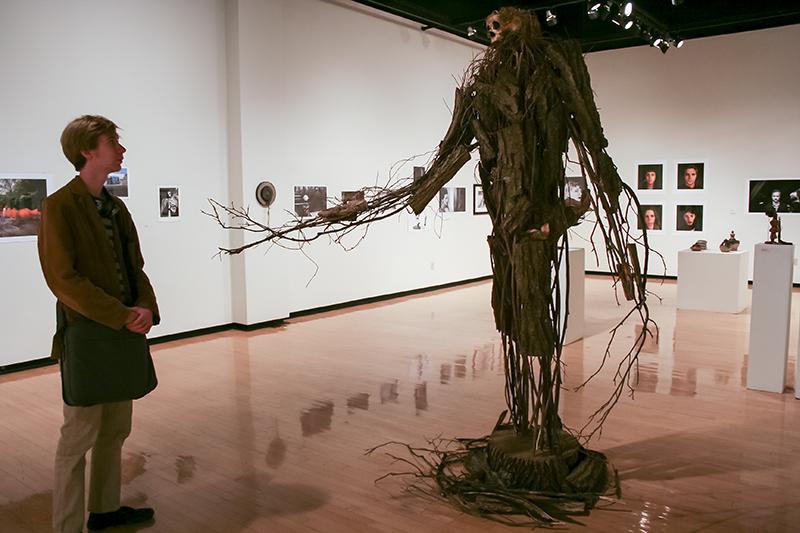 Michael Loftus, freshman, looks at Guardian of the Wood statue in the gallery.

NKU’s annual Juried Student Exhibition gave all students the opportunity to display their creativity in five or less works of art to be evaluated by a third party and scored.

“It really shows the eclecticness of what people do in the department,” David Knight, director of exhibitions said.

According to Knight, there are about 250 works entered every year and there were around 145 works total entered this semester.

“It’s our largest attended reception of the school year because family and friends come to that event,” Knight said.

The gallery itself showed a wide range of portraiture including photography, drawing and painting.

“Every year it’s a completely different group of works, a different feeling that you get when you go into the show.” Knight said. “There’s a lot of color in this show and a couple of years ago it was very neutral and black and white with muted tones.”

During spring break, a qualified judge from outside of the university juries the work and selects the exhibition pieces.

After the exhibition is installed, the juror returns on opening day and selects 10 awards; a best of show and nine merit awards.

The participants’ entries were judged by the Director of Covington Arts, Cate Yellig, who made her selection based on a variety of different factors including visual impact, design, message and expressiveness.

Senior art major Matt Dorman, who won Best of Show this semester, takes an interesting approach in creating his style of portraiture.

Dorman uses a silk screen for his artwork where he first defines all of the layers and then draws over it with micron pens and a white colored pencil.

This type of media was used in creation of his winning piece, ‘Al Hubbard.’

“It’s in the series that’s going to be in my senior show and it’s all about this CIA scandal in the ‘50s and ‘60s where they were trying to use LSD to control people’s minds,” Dorman said. “I thought it was kind of interesting and it’s a part of American history a lot of people probably don’t know about.”

All five of his submitted works revolve around a similar theme.

According to Dorman, Frank Olson was one of the first major casualties of the drug and it was within the inner department of the CIA.

“They kind of killed their own guy and it got a lot of media notoriety so there’s a lot of interesting reports to read about it,” Dorman said.

Students browsing in the gallery were very intrigued with the different styles that they saw.

“I really like how unique and individual every piece of art is and how a lot of the artwork evokes different emotions,” said freshman theatre major Courtney Helterbridle.

Helterbridle said she particularly liked the sculpture named ‘Journey to Atlantis!’ by Jenny Reed and Didem Mert, winners of one of the Merit Awards. She said she enjoyed the piece because it reminded her of Alice in Wonderland.

“It’s kind of creepy because it has like foam coming out of its mouth. But it’s also cool because it’s kind of surrealist and whimsical,” Helterbridle said.

The Juried Exhibition will run in the Fine Arts Galleries through April 4.