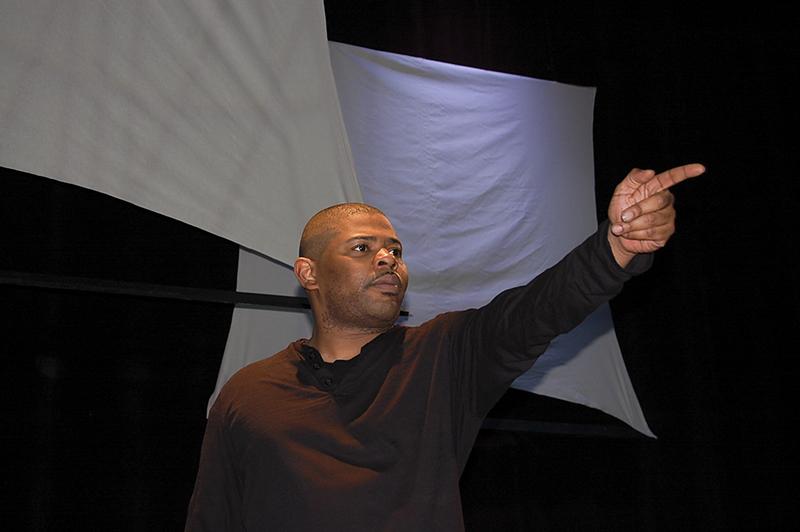 The stage lights are off and the Stauss Theater is completely dark. Deondra Kamau Means begins to speak the first lines of Daniel Beaty’s play “Emergency” as the lights slowly illuminate him and the minimal stage setup consisting of three sails and a few wooden boxes to be used as ships, cars and steps.

Means continued to deliver the lines for all 27 characters for the next hour and a half in this solo piece about a slave ship arriving in the Hudson River in modern day Manhattan near the Statue of Liberty. The characters range from young to old, gay to straight, male to female, slave-ologists to African Chiefs and slaves.

Daryl Harris, the director and an associate professor of theater and dance, said he first heard about the piece from an NPR interview with the playwright. He was asked by Dannie Moore, from African Americans Programs and Services, if he knew of a production they could bring to the campus for students in celebration of Black History Month. Moore wanted to kick off Black History Month with a performance he said.

Harris’ suggested “Emergency” as it is humorous and educational for a college audience. Also, his interest in the piece had recently been renewed after seeing Beaty at Playhouse in the Park performing another solo piece he had written called “Into the Night”.

“I think it’s incredibly difficult and I think Deondra’s doing a phenomenal job,” Harris said. “As a director we’re accustomed to asking the impossible of actors and the best actors don’t typically acknowledge the impossibility, they go for it.”

Harris continued that the difficulty goes beyond just remembering lines; it goes to finding distinct vocalizations and physical-izing all the different people. This piece brings together people we don’t commonly see on the stage together and you must find human nuances with making them a stereotype he said.

Means, who currently works for the Children’s Theater of Cincinnati, added that at some point in his 40 years he has known every one of these characters and drew inspiration from the people who in some way reminded him of the character he was trying to fine tune.

“Chief Kofi was the most difficult character to grasp because I was trying to figure out who he was,” Means said. “Was this a real phenomenon or was this just a figure of the father’s imagination? We find out the father was a scholar, a professor. He worked very hard to make sure his children didn’t have to struggle and when we’re introduced to Chief Kofi he lets us know that a part of his struggle, a part of his downfall, has been him forgetting where he came from and forgetting his past and not passing that on to his children.”

While working to put the play together since the middle of December, amongst both Harris and Means having other jobs, Means began comparing the story of the father, Reginald, in “Emergency” to what’s happening in modern society.

As it talks about in the play, many African Americans  try to assimilate  to be a part of  American society and forget the greatness of their heritage, Means said.

Means recited a section from the piece about architectural genius of dark skinned Egyptians, who gave us astronomy and mathematics and literature long before Greeks started training for the Olympics.

“We don’t learn those things in school. We learn more about slaves than Africans,” said Means. “So we believe our beginnings are slavery.”

Moore saw a rehearsal of the play on Thursday before its opening night on Friday and felt it was amazing because it was not only comical, but also very informative.

“One of the main points that I wanted them to get away from this performance is to reconnect to your past and share the stories with your children,” Means said. “If we don’t teach our children the greatness of what came before slavery and that we persevered through slavery to be here today then we don’t get that balance and we don’t have that esteem about ourselves that can allow us to succeed.”

Harris feels that the brilliance of the writing and the purpose of the play is to bring pieces from other cultures and the African American experience to the audience. It can help to celebrate and educate during Black History Month.

“I also hope that they take away a smile, and another level of compassion and understanding of how we are all similar while at the same time appreciating our differences,” Harris said.

More information about upcoming Deondra Kamau Means performances can be found at on his Facebook page.

Daniel Beaty will be giving a free performance and book signing for “Transforming Pain to Power” Feb. 24 at Playhouse in the Park.

More events and exhibits for Black History Month can be found http://aaps.nku.edu/.