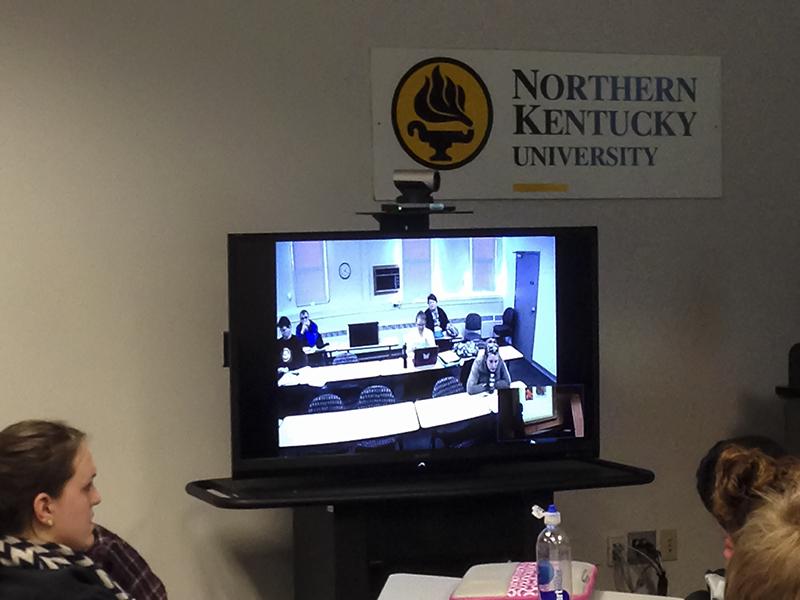 When Greg Jones walked in to the first day of his advanced public speaking class, he was surprised to find that everyone was there, except for the professor.

In place of a professor, the class was being conducted by a large, flat-screen television on the side of the room, with a swivelling camera on top.

“I walked in and the teacher’s on the screen, and the screen was talking to us,” said Jones, a sophomore informatics major.

The person that Jones heard on the talking screen was Sam Lapin, a professor for NKU’s Grant Center Educational Outreach program.

Lapin first had the idea to teach a class at the main NKU campus via telecommunication as a means of meeting the needs of his students at the Grant County campus.

Lapin wanted to offer a 300-level communications course to his students, but not enough at the Grant Center needed the class to fulfill the enrollment. To fix this, Lapin decided to offer the class at NKU’s main campus as well. By telecommuting via Interactive Television (ITV for short), Lapin was able to teach the class in person at Grant County, while communicating with main campus students using a screen and camera.

According to Michaela Sweikata, NKU’s video conference expert, Lapin’s class is one of 22 courses from the Grant County center that use the technology to teach a class, while other classes incorporate the technology into a traditional classroom setting.

“Other classes can use the ITV technology to supplement their courses, or enhance the community experience for students, such as the Chase College of Law bringing day and night students together; the College of Business bringing international students working with Local Students in real-time; or the Masters of Health Informatics program using ITV as a means of demonstrating how to perform health checkups where doctors aren’t present,” Sweikata said.

Several rooms on campus, such as the Digitorum in Griffin Hall, are permanently equipped with the technology, with several mobile units that can travel anywhere on campus.

This is the first class that Lapin has taught using ITV, and so far it has been successful.

Much of the communication between instructor and student is seemless during the class. Lapin talks conversationally with his students using speakers mounted at the front of the room, with no noticeable lag or volume issues.

Lapin also attributes much of this success to the preparedness of his students.

“Teaching a 300-level class is a benefit,” Lapin said. “I would be much more reluctant to do this with first-semester freshmen.”

Junior English major Patrice Thompson said that although the class is taught by Lapin from a computer, she does not feel that it is comparable to an online class, and is in fact far superior.

“I prefer being in a classroom, even though he’s not physically here,” Thompson said. “I still have to get out of bed and come to class.”

Although Thompson enjoyed the telecommuted classroom experience, she felt that it became more difficult for her to develop a relationship with a professor that she has never met in person.

Lapin tries to counter this unorthodox method of communicating with his students by being available to contact at any time, either via e-mail or the home phone number he provides to all the students in his speech class.

Kyle Volpenhein, a sophomore senior communications studies major, felt that the ITV classroom set up asked for more responsibility on the part of his classmates and himself.

Thompson says that even though Lapin is not in the same room as the students on NKU’s main campus during speech days, he still is able to provide useful feedback to students after their speeches.

“He points out the things that you don’t notice while you are giving a speech,” Thompson said.

Lapin feels that an unintended benefit to the ITV classroom setup is experience with telecommunication that students may employ in their future jobs.

“I could easily see in the future someone interviewing for a job, and the person says, ‘do you have any experience with electronic presentations?’ and now they can say yes,” Lapin said.