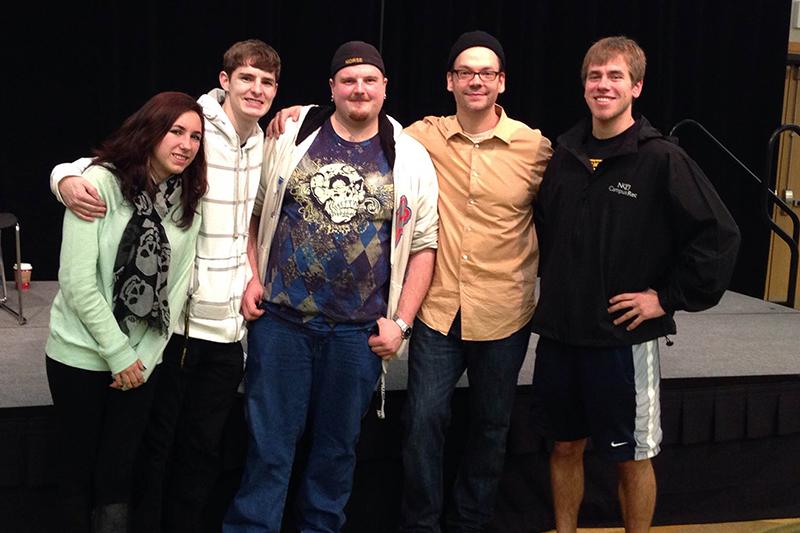 NKU Students pose with Derek Hughes after his performance on Jan. 13.

Students packed the seats of the Student Union ballroom for comedian and magician, Derek Hughes, on Jan. 13 to kick off this semester’s list of events hosted by the Activities Programming Board.

Hughes introduced himself, stopping his background music multiple times to explain his epically failing magic trick. Three ropes that were supposed to magically turn into one, ended up being held together by Hughes’ fists before he admitted that three ropes were going to stay three ropes. Giggles erupted from the crowd as he showed off his ability to incorporate magic and comedy together.

Hughes, originally from Minnesota, attended college to study acting at the University of Minnesota. He started pursuing his mashup of comedy and magic after being invited to perform at the HBO sponsored comedy festival in Aspen, Colo.

During the show, Hughes did a classic card trick where he tried to pick the same card that someone else chose without seeing what card they had. When he chose the wrong card, he responded saying, “I just asked,” throwing the crowd into fits of laughter.

“Some day it’s gonna match,” Hughes said. “The odds are in my favor.”

Hughes incorporated a lot of audience interaction throughout his show, which called for a lot of improv.

“He embodies the crowd and is very good with improv, so I thought it was very entertaining,” said freshman Sydney Terry.

“I try to find big personalities,” Hughes said of his interaction with audience members. “We really like it when stuff happens that’s new or fresh or surprising,” he said.

Scott Miller, an audience member and student at NKU was called onstage by Hughes to participate in a card trick.

“I’ll follow him wherever I can and see what he’s got that’s new,” Miller said after the show.

APB decided to bring Hughes to NKU after seeing a part of his act at the National Convention of Campus Activities (NACA) in Nashville, Tenn. this past Summer. NACA is an opportunity for colleges to scout entertainment to bring to campus and attend educational sessions.

APB is awarded an allocation each year from the Dean of Students office to use for bringing events to campus.

Hughes took time after the show to talk to audience members, sharing his aspirations for his career and past successes.

Hughes will be kicking off a three month run at a hotel in Santa Monica with an act called, “Insomnia,” in the coming months in which he will be using material that he plans to test on colleges throughout the Spring.

“I hopefully have made a new handful of fans,” Hughes said.