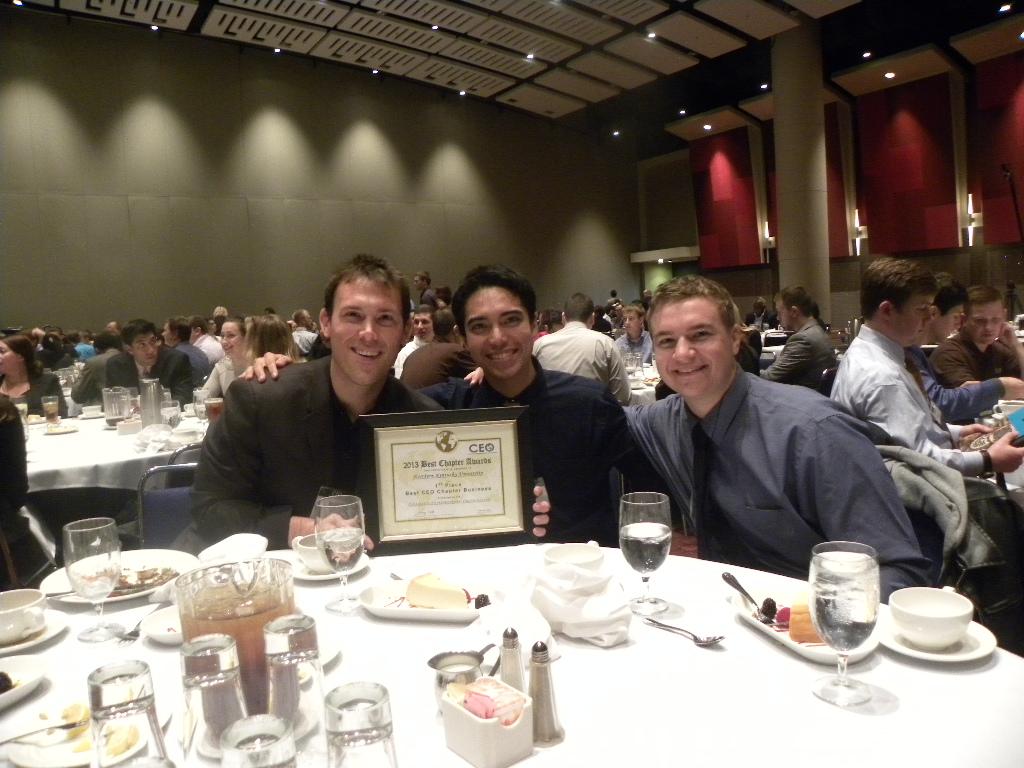 At the Collegiate Entrepreneurs Organization national conference this past weekend, NKU’s CEO chapter made a special presentation and garnered a huge success.

CEO presented their t-shirt design project Punch Press Threads as a business. Out of the over 400 schools with CEO chapters in the nation, four were selected to present and NKU’s chapter came home with first place.

“We’ve created the best chapter business in CEO in the country, which is pretty cool,” said Jason Hulett, senior entrepreneurship major and president of CEO.

Hulett said the experience there was amazing, and that it only further fueled their hopes for CEO and Punch Press Threads in the future.

Punch Press Threads began when Hulett and fellow CEO member Michael Stubbs would just look around campus and see what students were creating.

“We like to go to the art gallery and see what students do, but it seemed like that creative outreach ended at the door,” said Hulett.

A main goal of CEO is to create a stronger campus community; to create a hyperlocal environment where students support students. Hulett explained that they wanted to expand to other disciplines that would benefit from the help of an entrepreneur outside of finance and business.

Hulett wanted to start a process of collaboration to where the departments didn’t feel so separated and make CEO the glue that could hold all those departments together.

With that in mind CEO collaborated with the MINja’s to run a t-shirt design contest. Ten finalists presented their designs to a panel of judges, along with over 1,600 student votes, to choose a winner, runner up, and student’s choice design. Paul Kemp, junior entrepreneurship major, took home first place in March with his design “Free.” He’s since become a leading member of CEO.

The three student designs were then printed on American Apparel clothing and sold by CEO;  10 percent of the proceeds went to the student. As for the design itself, Hulett said that the student only has to work with CEO for a year. From there, the design is all there’s if they choose.

From that contest they built a model around it.

“We wanted to create a better bake sale,” said Hulett.

Instead of cookies, however, students would receive an original design made by a current student.

“It also makes it a lasting impact, because with a bake sale you eat it and it’s over. With a shirt, you can keep it for a long time,” said Stubbs, a junior entrepreneurship major.

They approached it as creating a business and a brand. Hulett says that’s where they came up with the boxing theme of their logo; it had to do with delivering an impact. They wanted to create an experience not just a product.

They only create 24 of each design iteration which creates an exclusivity to the product. With each shirt a card with information about the designer and the design and a custom pen is included, Hulett explained.

In the first round of shirts many were pre-ordered, so they set up special deliveries for a few. Hulett had a friend, who happens to be a boxer, come in full gear, robe and gloves and Hulett acted as his corner man. They entered classes by surprise, played out a bit and delivered the shirts. Hulett said this way, for a $20 contribution, you don’t just support the arts and entrepreneurship, but you get a cool story to tell.

“That’s a really cool experience you won’t get anywhere else. I doubt any bake sale or online retailer is going to dress up and deliver your product,” said Hulett.

Punch Press Threads frequently sets up tables in the Student Union. Their next set of design iterations will be in a hoodie style with reworked designs and color schemes. Hulett says they keep in constant contact with their designers to keep the designs fresh.

As for the future, CEO hopes to make Punch Press Threads into a legitimate business outside of NKU, as well as expand what they’ve done with Punch Press to other organizations.

“We want to be the kickstarter of campus,” said Hulett.

They’ve begun working with Norse Baja to assist them in raising funds and helping to design a tier structure to their efforts to build an off-road buggie for competition in June. They’ve also started working with an individual student who, along with his father, is “getting into the coffee game” said Hulett, making organic, certified coffee through fair trade called XIX Amber. They are assisting in getting them a kickstarter set-up.

CEO will soon hold a table combining Punch Press along with free coffee and the current Norse Baja buggy. In the Spring, they plan to hold “Graffiti Fest” which will feature live art creation. The event will benefit two charities; Visionaries and Voices, which assists disabled individuals in creating art; and The American Red Cross. The event will be an effort to present graffiti culture in a constructive, instead of destructive way, Hulett explained.

This spring semester they’ll also hold another t-shirt design contest with the theme “Leave your Mark.” Voting will be held through Facebook.

“We want students to define who the culture of NKU is and use t-shirt designs as a starting point,” said Hulett.