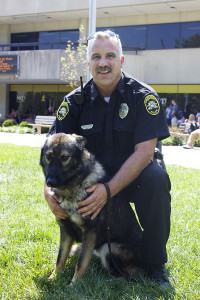 The bond between man and man’s best friend can be an extremely profound one. In the case of Officer Todd Streitenberger and his explosives dog partner, Arrit, this bond is incredibly important.

Streitenberger, an NKU alumni, has been working as a canine officer for almost 20 years. He worked at the airport and trained with his dog there under the Air Force. Then after the events of 9/11 he began training under the TSA.

After retiring from the airport he was contacted about working at NKU with the new explosives dog.

Arrit, a year and a half old German shepherd, has only begun his work at NKU and is still undergoing training in Hamilton and Cincinnati. Arrit is currently trained to identify 12 to 15 different odors for explosives.

Streitenberger says that when working with a dog it’s about the connection; that it relaxes him. He doesn’t consider himself a very strict handler, and calls Arrit a very easy going dog.

“Working with a dog you don’t want it to become too much fun and not enough work, you’ve got to find a balance,” said Streitenberger.

Streitenberger believes he’s found that balance with Arrit. He states that 99 percent of the time is about training. Working on the campus new problems can arise, like unfamiliar stairs, and he says you don’t want to miss a thing that might make the dog uncomfortable.

“It’s just like a child, you work and find new problems that it’s your priority to address,” said Streitenberger.

Arrit being comfortable enough to do his job is one of Streitenberger’s most important tasks. He says there’s an equal dependence between him and Arrit. That the relationship is so close he can feel when Arrit is uncomfortable that “you can feel it up the leash”.

“The happier he is, the happier I am, and the better he’ll work,” said Streitenberger.

Arrit’s work won’t only be on campus, but at a nearby airport as well.

Streitenberger said that having a dog in the immediate area will improve efficiency in emergency situations.

Streitenberger is greatly enjoying the work on campus. He says that while he enjoyed working at the airport, the people were always in more of a hurry. Here, students stop and ask about Arrit, which he loves.

“My favorite thing, aside from having the bond with Arrit, is having the kids ask questions. I just love it,” said Streitenberger.

He loves the environment and loves working with Arrit.

“It’s just like any case with a dog. That partnership makes you or breaks you.” said Streitenberger, “He’s my best friend.”