Graffiti stimulates debate: is it art or is it scribbles? 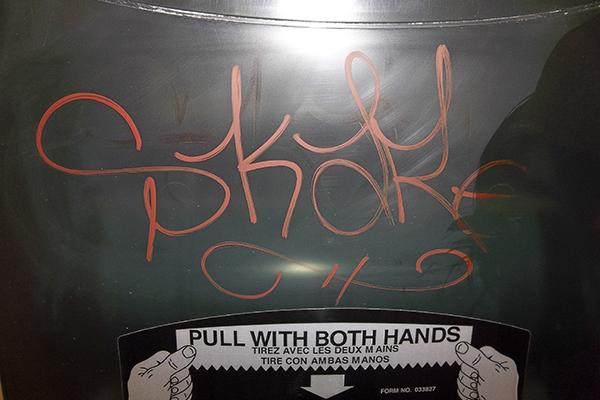 Graffiti has become more of a commonplace art form in recent years as popular artists like Banksy and Shepard Fairey have painted on many urban landscapes, such as Fairey’s murals seen throughout Cincinnati. But when does art turn into vandalism or just become scribbles?

NKU has had a recent string of graffiti popping up inside different buildings around campus, including the men’s restroom on the third floor of the Student Union and a men’s restroom in the Fine Arts building. The graffiti was created in marker with the similar tag being the letters “PHD”.

University police has taken action to find and stop the individuals or person behind these crimes. At this time, Police Chief Jason Willis said they do not have any leads on the identity on the graffiti artist(s).

Willis stressed that this behavior can’t happen. “We don’t want people to think that this kind of thing is tolerated,” Willis said. “Hopefully people in the community will help find the individuals involved.”

“The university has worked so hard to fix up the school and make it into one of the leading universities in the world,” Chief Willis said.

The police are taking this vandalism very seriously and have asked students to help keep the school clean and free of all graffiti. They want students to take pride in the university and to keep it beautiful for years to come.

“Graffiti left unattended invites more students to be tempted to also add to it, creating a compound effect. That is what has been occurring in the Fine Arts building stairwells,” said Ray Mirizzi, director of operations and maintenance.

This compound effect doesn’t just translate to more graffiti. It can have financial consequences as well.

“Defacing structural surfaces has variable cost impact depending on the type of vandalism and what measures are needed to eradicate it,” Mirizzi said. “Typically the costs are minimal, but sometimes can be more costly…. An estimate to cover up the graffiti in the fine arts building is $5,000.”

Doug Raleigh, an operations and maintenance employee in the Fine Arts building, said that since school started, he has spotted several pieces of graffiti in the restrooms. He also said most graffiti is rather easy to clean up and doesn’t always require a lot of extra time.

“If we catch someone in the act, they will be expelled,” Raleigh said. “All over some childish things.”

Some students believe that there is a time and place where it should be allowed. Ethan Snope, a freshman journalism major, stressed that graffiti can either be scribbles or art. However, he said that these are only scribbles.

“Why do they [the individual(s) responsible] think ‘I’m gonna do this, because I’m badass’?” Snope said. “It is just so stupid, they’re just scribbles.”

Another freshman, Jake Osborne, with friends involved in making graffiti, has a different opinion than most.

He agrees that sometimes the graffiti is nothing more than scribbles, but to the artist, it can be something more. To an artist, graffiti can represent a story of where the graffitists have been.

“A lot of my friends are into tagging,” Osborne said. “It is a kind of personal thing to them. It really depends on where it is; it’s all about where you put it.”

Tagging is a term used to denote when graffiti is more personal. It is normally done with a name or nickname of the person. It can be a way for people to leave their mark as a sign that they have been there.

Willis and Mirizzi’s standpoint about the recent graffiti suggest that university officials do not think the graffiti projects a positive image of NKU, an image that some people who attend the university or are employed by NKU take pride in.

“I see on Twitter all the time…. People saying all the time what a beautiful campus NKU is,” Willis said.

If you have any information about the individual or individuals that are responsible for this crime, please contact NKU police. You can give information anonymously online at police.nku.edu and by using the iNKU app on your smartphone under the alert tab.