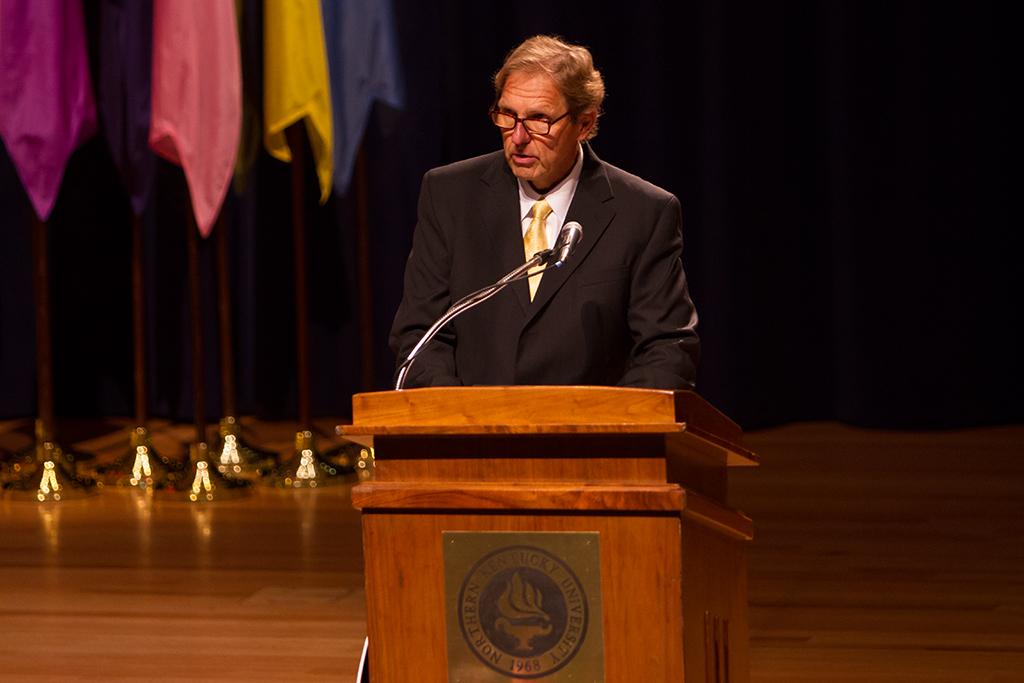 President Mearns Fall 2013 Convocation was held in Greaves Concert Hall on Friday, August 16, 2013 to talk about the future of Northern Kentucky University and commemorate the past years success. NKU Professor Alar Lipping was named the 2013 Frank Sinton Milburn Outstanding Professor at the Fall 2013 Convocation.

On Aug. 16, 2013, Alar Lipping received the award after being nominated by his peers throughout the university. Two weeks before physically receiving the award, he received a phone call letting him know that he had won.

“I know a number of previous recipients and I thought that I would never get this award,” Lipping said.

Lipping was chosen for the award after the Outstanding Professor Award Selection Committee looked over his nomination.

Many of Lipping’s peers agree that he deserves the award. Gail Wells, Vice President for Academic Affairs and Provost, thinks that it is a great experience to work with Lipping.

“He is dedicated to keeping his classes current and interesting to students,” Wells said. “He sets high standards for them and helps them to meet those standards.”

Wells said Lipping cares about this campus and has done his best to improve the university. Wells has worked with Lipping throughout the four years that he was president of the Faculty Senate.

“He was a very strong president of Faculty Senate,” Wells said. She also said Lipping is “very organized and rational.”

Grace Hiles, current secretary of the Faculty Senate, commented on how Lipping considers all the different perspectives of a situation and then moves into formal conversation about the issue at hand.

“He wanted to know how something was going to affect not only the present but also the future, particularly on behalf of younger faculty members,” Hiles said.

Hiles said Lipping was great at communicating with people personally. “If someone had something to address, he made an effort to address it; he made a personal visit to them. He felt discussion was best face-to-face, and it made a world of difference.”

According to Lisa Schultz, Academic Coordinator of the Department of Kinesiology and Health, Lipping cares about issues on campus. He has dealt with many issues, including health insurance costs and how parking around the university is affecting the staff’s income.

“He tried to propose a lower parking fee for staff, but it was not passed,” Schultz said. “He really seems to care about everyone at the university.”

These are the many contributions that have helped Lipping win the Frank Sinton Milburn Outstanding Professor Award. He won by assembling material, his scholarly work, his teaching evaluations, letters recommending him for the award and the service activities that he has compiled throughout his 25 years of teaching at the university. To Lipping, winning the award is significant because his colleagues are the ones who chose him as the winner.