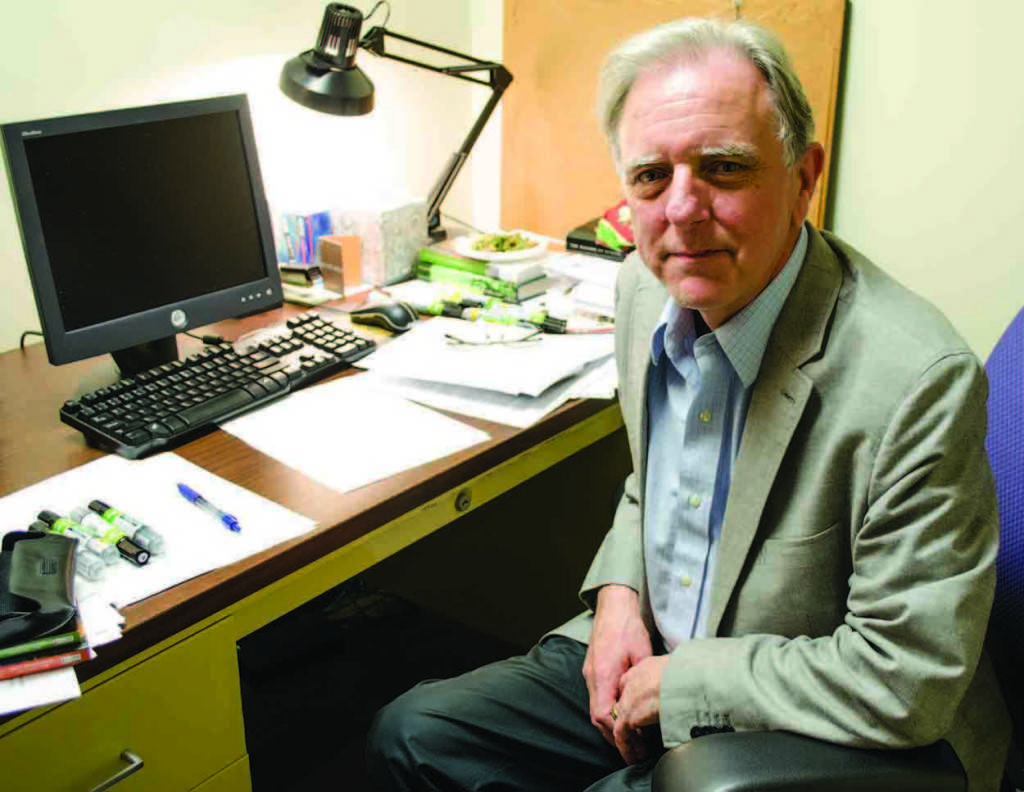 Northern Kentucky University history lecturer Terence Fleming has earned adoration from history students and colleagues in his tenure at NKU. As he plans to move to California this month and end his time on campus, Fleming reflects on his life and time as a professor at NKU.
“Over the last 10 years, NKU has been completely friendly and cooperative,” Fleming said.

Fleming, known as “Terry” to his friends, is an Irishman who grew up in Birmingham, England. If you’ve noticed a man with a British accent, a crisp oxford shirt and a cigarette in hand outside of Landrum, you’ve just met Mr. Fleming. After the fall term, Fleming and his wife will be moving to California where his wife has taken a position at California State University in San Bernadino.

For 10 years, NKU students have rushed the registrar in hopes of signing up for one of Fleming’s history classes. A short visit to Fleming’s professor page at ratemyprofessor.com will give you a general idea of the positive influence his classes have had on his students. Despite his consistent good report with students, Fleming didn’t originally intend to become a professor at NKU.

Fleming taught at Alma College in Alma, Mich. prior to his tenure at NKU. When NKU offered Fleming’s wife, Kirsty Fleming, the position of Chair of Mathematics and Sciences, he was offered a lecturer position as incentive.

“The workload increased and it wasn’t an easy transition,” he said.
Teaching at a college wasn’t always Fleming’s plan. As a college student, he thought about becoming a schoolteacher or journalist. He found that he didn’t enjoy teaching. He took an unrelated job as a worker in the civil service in London, England from the late seventies to 1991. He took course training at MI5 security service where he trained to protect England’s national security from terrorism and espionage. The civil service then appointed him to defend people in the court immigration appeals.

“I learned how to give closing arguments and cross-examine,” Fleming said. “Sometimes I found that the government was wrong.”
In one case, he claimed the government should grant citizenship to the person and his bosses disagreed with his stance. The case made it to the House of Lords, which ruled that Fleming had made an “exercise in common sense” and ruled in his favor.

One of the traits students recognize the first time they take a Fleming course is his incessant use of the whiteboard. His unique style of teaching by relying on his own handwritten notes and comprehension of the material stands out.

“If teaching has any function at all, it’s to humanize the subject,” Fleming said. “Writing on the board helps make the class feel as if they’re part of the story.”
His dialogue with students in class has captured their imagination and laughter. Fleming is notorious for keeping his class entertained with his British wit. His temperament and wit is what kept students signing up for his classes. Interim Chair for Department of History and Geography, William Landon touched on Fleming’s authentic sense of humor.

“His humor is as humane as it is kind,” Landon said. “His students will miss that, and so will his colleagues.”
Landon expressed the bittersweet feelings of the history department at Fleming’s departure:

“Terry Fleming is respected and admired by his students and he is a dear friend to all of his colleagues in the Department of History and Geography. So, it is with mixed emotions that we bid him farewell and adieu,” Landon said. “We all wish him, in the sincerest spirit of friendship, all and every success as he leaves Northern Kentucky University.”

When reflecting on his legacy at NKU, Fleming prides himself on being able to find a balance in teaching history without skewed perspectives. He is most proud of being able to develop new courses and rebuild a few old ones.

“I’ve absolutely adored my teaching experience here and will miss my friends madly,” he said. “I’ll be lucky to find that in California.”
When asked to give a final farewell for his students, Fleming had some advice, “Keep taking interest and don’t give up. Follow your heart’s desire.”