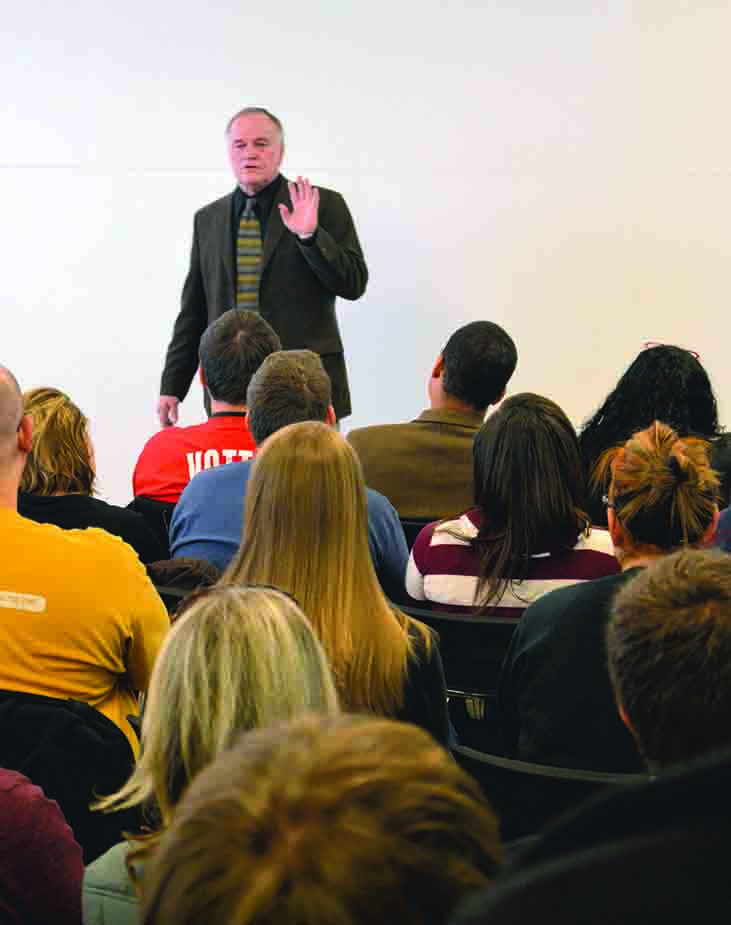 A bible, blanket, towel and a bar of soap were the four things that replaced the comfort of Randy Steidl’s home when he was wrongfully convicted of the tragic murder of Dyke and Karen Rhodes on June 14, 1987. Steidl sat on death row for 12 out of the 17 years (6305 days) he was in the Danville Correctional Center in Pontiac, Ill. trying to prove that he was an innocent man.

The only other things he had access to were what he referred to as “garbage food” and an hour outside a day. Meanwhile he was locked inside a jail holding cell waiting for his execution day to be set, only to come back with another rebuttal to attest to his innocence. Most importantly, Steidl had access to the law library and he spent his first three months in prison reviewing how to defend his case.
On Nov. 27, Steidl visited Northern Kentucky University to speak out against the death penalty and share his story. He has traveled across the country to change hearts and minds and correct common misconceptions that surround the death penalty. Room 302 in the Student Union was filled with over 80 students and professors on the edge of their seats awaiting Steidl’s deliverance of his story.
Steidl grew up in the small town of Paris, Ill. with a conservative farm family. He described Paris as a “blue collar farm community with 30 churches and 40 bars.” And he wasn’t one to stray away from that standard; Steidl said he “played hard and worked hard.” With a construction job during the day, he liked to hang out at the bar at night and had a few misdemeanors for battery in his early twenties.
On the night of July 4, 1986, Steidl was coming back from a family reunion with his mother, son and aunt. After that he proceeded to go out with some friends and stayed with a girlfriend.

His aunt called to tell him the next morning that Karen and Dyke Rhodes’ house had burnt to the ground. Later they found out that the couple didn’t die of smoke inhalation, but of being stabbed to death over 50 times each.

Karen Rhodes had worked for an employer who had reportedly been protecting drug sales and doing drugs. The day after the death, he walked into a packed bar where Steidl was playing pool, came up to him and asked him if he knew anything about what had happened at the Rhodes’ house the previous night.

Steidl said, “He came up to me and said I don’t have a lot of clout in this town yet, but I have a lot of money. And he offered me $25,000 if I knew anything about the Rhodes murder.”
After Steidl turned the employer away, the phone rang at the bar and it was the Illinois State Police asking him to come down to the station and answer some questions. Steidl was asked to bring his friend Herb Whitlock in as well. Not more than a second later, five police officers stormed into the bar and asked him to come with them.

After giving the police their step-by-step alibis, Steidl and Whitlock had to go through seven months of ridicule in their small town every time they went out in public. On Feb. 19, 1987, five more cops arrived at Steidl’s house with their guns drawn and took him to the correctional center and placed him in a holding cell until he was convicted on June 14.

Steidl’s own brother, who was a city cop, believed he was guilty. His brother told him if he confessed now they wouldn’t use the death penalty and the police department “doesn’t arrest people who aren’t guilty.”

The only forensic evidence linking Steidl and Whitlock to the crime scene were two unreliable eyewitness testimonies. He also had an upstanding alibi that his friends and family could have verified if his attorney tried to dispute the evidence brought to the stand by the prosecutor. By day three of his four-day trial, Steidl realized his case was a “sinking ship.”
“They had just convicted me of a double murder that I had nothing to do with,” Steidl said.

However, Steidl still “believed in the system” at this point. Steidl filed for motion for an ineffective counsel and seven months later he had an evidentiary hearing where the two eyewitnesses confessed to lying about their testimonies given previously. He filed motion after motion including direct appeals, misconduct against police, misconduct against court and post-conviction alibis.
After sitting on death row for nine and a half years the news media became interested in Steidl’s story and the police and prosecutor were embarrassed. Steidl received a new investigator on his case and wanted a full-blown investigation to be redone. He also had a cop, Michale Callahan, stand up for his case. Then Northwestern University had a class of journalism students that reviewed his case and found 20 eyewitnesses who would have discredited the two eyewitnesses.
Nine months later evidence favoring the defense was withheld.

“I had an expert witness come forward, and a federal state judge combing through my records,” Steidl said. “Others on death row haven’t been as lucky.”
According to Steidl, he’s free in spite of the system, not because of it. Out of the 141 other men on death row in Illinois with Steidl, nineteen were also innocent.
“You can release an innocent person from prison but you can’t release them from the grave,” Steidl said. “Our country has no room for the death penalty.”
After Steidl finished, the room at NKU was full of applause and some were even on their feet.

Steidl’s friend Herb Whitlock was in prison for four extra years and no one was ever convicted for the crime.
Steidl had to readjust to everyday life after getting out of prison. He moved to Missouri and got a job in the printing industry. He had forensic counseling and has been diagnosed with post traumatic stress disorder. He has been suing Illinois for eight years and settled for $2.5 million last year.

“The only way to fix the death penalty is to abolish it,” said Steidl. “All murders are heinous but I don’t believe that anyone has the right to take anyone’s life, there is no closure for the death regardless.”