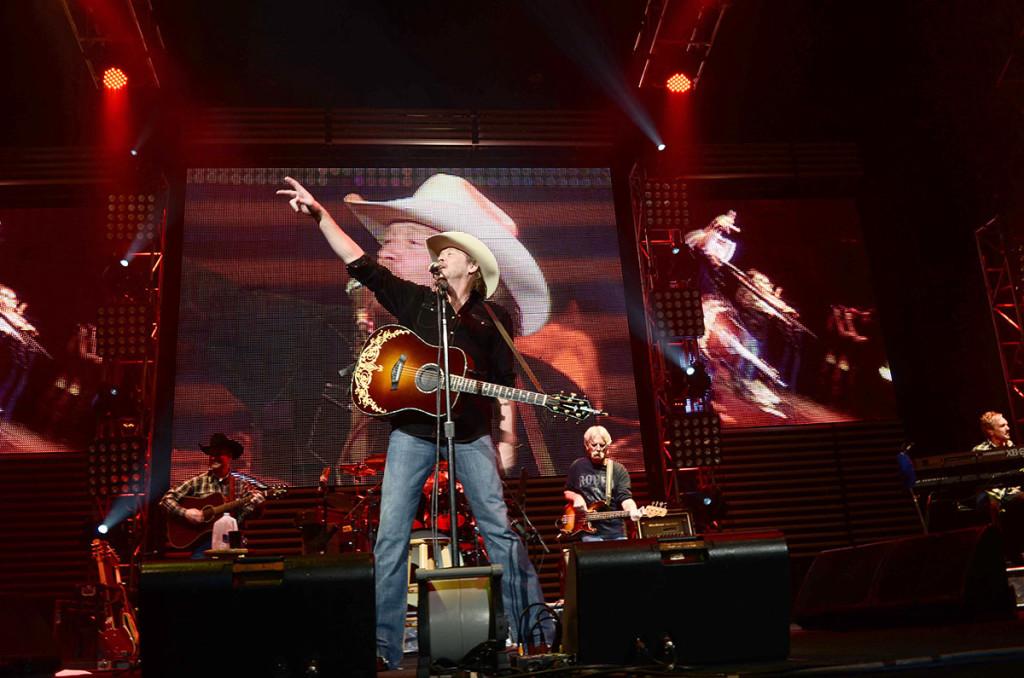 Alan Jackson thanking his fans from the Kentucky/Ohio area.

On Saturday, the Bank of Kentucky Center hosted one of country music’s biggest legends and most well-known artists. Alan Jackson has had over a 20-year career and sold over 50 million albums worldwide.

The BOKC was packed with audience members aging from 5 to 85 waiting to hear “The Small Town Southern Man” take the stage. Jana Kramer, performer of “Why You Wanna,” opened for Jackson with songs from her new album.

When Alan took the stage the whole crowd went wild and everyone was on their feet. He opened with some of his older songs, “Livin’ on Love,” “Summertime Blues” and “The Blues Man.”

Then, surprising the entire audience, he grabbed a man’s hat in the very front of the pit and autographed it and gave it back. He went on to sign over 10 autographs for people in the front row. People throughout the audience shared whispers of how he took time for his fans.

“I just couldn’t believe it, he’s always been pretty humble,” Martha Turner, audience member, said. “I think it’s great that he cares about all of us. Some artists just don’t do that.”

He went on to sit down with his entire band and introduced them all and told where they were from. Several were from the South — Alabama, South Carolina, West Virginia and Oklahoma. Jackson is from Georgia, but moved to Nashville to further his career. Even a few were from Kentucky or lived here now.

Then he told the audience a story about the very first song he wrote and how it didn’t hit the charts.

“I was bummed out, and I came home and that’s the day my wife decided she was going to be pregnant,” Jackson, said. “I thought I was going to have to go back to work. But then this song (Cowboy Blues) hit the charts..and luckily I haven’t worked a day since.”

He reflected to the audience about his friendship with Randy Travis and what songs they wrote together including “She’s Got the Rhythm (And I’ve Got the Blues).” He made jokes and laughed along with the audience like they were old friends.

He then sang what he called “The best hurtin’ song”‘ he’d heard in a long time, which was “You Don’t Have to Love Me Anymore.” He sang other heartbreakers, “Fallin in Love as She’s Walkin’ Away,” his duet with the Zac Brown Band.

His songs were laced with impactful lessons and truths everyone has to go through in their life. He had songs about growing up, “When Daddy Let Me Drive,” songs about American pride, “Where were you when the World Stopped Turning,” songs about heartbreak and relationships, fatherly advice, and making something big out of nothing, “Small Town Southern Man.”

He continued to “rock the jukebox,” with old hits like “Remember When,” “Good Time,” and “5 o’clock Somewhere.” “Where I Come From” was a crowd favorite because of his video that showed different parts of Cincinnati and even mentioned NKU.

Even if you aren’t a country fan, Alan Jackson is just one of those artists that people of all ages are drawn to. His sense of humor and humbleness on stage when he thanked the people of Kentucky for supporting him throughout his career hit home with many.