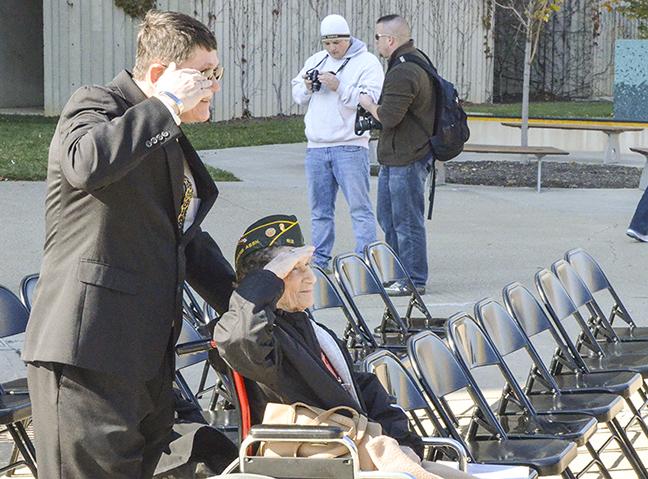 Faculty and students gathered outside of Steely Library at Northern Kentucky University on Nov. 9 to pay their respects to the nation’s veterans.

Silence fell over the crowd on the relatively warm November day as the American flag waved in the pale blue sky moments after being raised to full mast. The flag raising and wreath laying was only the beginning of events planned to honor the impending arrival of Veterans Day over the weekend.

A moment of silence was initiated as two female soldiers placed a wreath at the base of the flagpole. “Taps” proceeded the wreath laying in remembrance of those who died fighting for their country.
Eighty-nine-year-old Pfc. Jeanette Merriss was one of many veterans that attended the ceremony. Merriss, a veteran of World War II, was one of the first of 150,000 women to enlist into the Women’s Army Corps during the war.

“The war was going on and I had a good job, but both of my brothers were serving and I felt like I had to enlist,” Merriss said.

Merriss was stationed in Baer Field, Indiana as a radio and telephone operator. Between 1943-’45 Merriss completed 10 cross-country C-47 aircraft final flight testing missions.
For the past 30 years, Merriss served in many leadership roles in her local WAC chapter in Florida. Recently, Merriss returned to the Northern Kentucky area to be near her son.
Dave Merriss, assistant director of veteran student services at NKU and Jeanette Merriss’ son, followed in his mother’s footsteps and enlisted in the Army during the Vietnam War.
“I feel like I answered the call when our nation needed protection,” Dave Merriss said. Throughout his military career, Dave Merriss has moved more than 20 times.

Jeanette Merriss’ decision to enlist affected more than just herself. Decades later, multiple family members followed in her footsteps. Her courage and commitment has never been publicly acknowledged, but to Dave Merriss she is an ideal role model.

“She has never had any real recognition for her courage and service, her support of myself, my brother, son and three nephews who all served. To me she has been and will always be my hero,” Dave Merriss said.