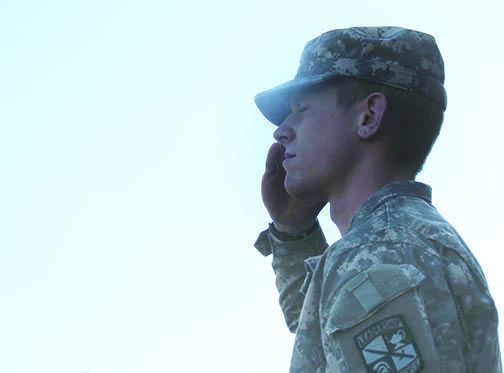 Soldiers stepped out from large tents that held about 30 people, winds picked up and sand began to assault the men who got down in a squatting position to protect themselves. Quarter size rain drops began to fall. The rain was a brownish color, having mixed with the sand in the atmosphere. Jason Earhart, senior criminal justice major, reflected on his experience as part of the United States Army.
“We called this storm a sand-nado, because from above the winds looked like a tornado,” Earhart said.

Earhart, originally from Fort Leonard Wood, Miss., comes from a family who is highly vested in the armed forces with a stepfather who served the National Guard and a great-great grandfather and two great-great uncles who served in the Army. Although his relatives didn’t share many war stories, Earhart said he holds onto a photo album of pictures accumulated during his great-great grandpa’s time overseas.
Earhart’s great-great grandpa shared the photos with him just before his death on Pearl Harbor Day, in 1985. Earhart said war time was hard for his elderly relatives to reflect on.
“The last thing you want to ask a veteran is if they killed someone,” he said. “I had a neighbor that shot a Nazi officer in World War II. He would cry talking about it.”

“I have things I don’t want to talk about. You could ask an older relative to write things down instead of having a conversation with them. Then they have time alone while they are reflecting,” Earhart suggested.

Earhart graduated from basic training in 1996, just three days after his 21st birthday.
“I was never afraid when I was in Iraq because I had a job to do and I was trained to do it,” he said.
Although Earhart focused on his duties, he explained that it was possible to get sidetracked.

“The Red Cross told me that I needed to call home. I called home and found out that my grandpa had cancer,” he said. “Knowing that a person you love has cancer, you don’t know what stage and they are thousands and thousands of miles away and there is nothing you can do; is the scariest thing I experienced.”

“The Red Cross gave me another message to call home and I found out that my grandpa not only had prostate cancer but he had it in his kidney, his ribs and his wrist, it was everywhere,” he said.
To put this situation in perspective he described what surrounded him as he received the news, “You have five minutes to call home. My back faced the guys who were standing in line. When I began crying I didn’t want the other men to see any emotion. The phone monitor saw me upset and allowed me to talk somewhere more private when I said it was an emergency.”
“This was the only time I was ever afraid,” Earhart said.

By the time Earhart returned home from his tour his grandpa’s cancer was in remission. He explained that another man in his tour was not as lucky and lost his father while overseas.
Although there were difficult times, Earhart spoke of some lighthearted times as well. He said that letters and care packages were a real “morale booster.”
“We weren’t allowed to receive packages containing alcohol, cigarettes or cigars, but there were ways around it. People at home would empty out bottles of Listerine and replace it with whiskey,” Earhart said.