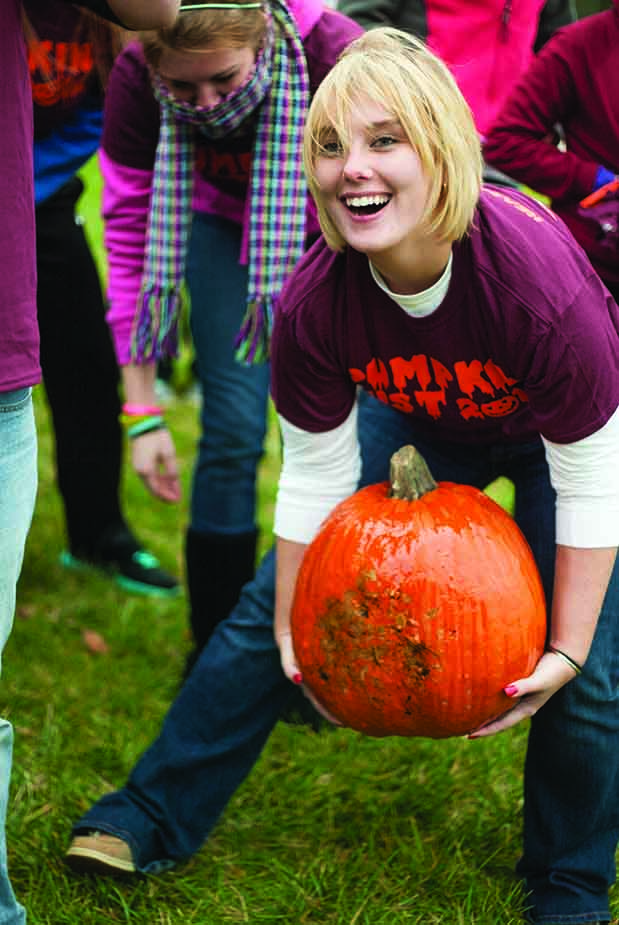 Despite the impending arrival of Hurricane Sandy, the Activities Programming Board held the 10th Annual Pumpkin Bust on Griffin Lawn at Northern Kentucky University on Oct. 29. Participants took part in familiar events including the pie eating contest, pumpkin toss, costume contest and the greasy pumpkin.

Joey Cunningham, APB external relations chair and senior organizational leadership major, was in charge of planning the event.
“My position is required to plan the Pumpkin Bust. I’ve been organizing everything since the end of September,” Cunningham said. “The pumpkins and pumpkin pies were donated from Kroger.”
Due to the weather and time of year, the Tug of War contest was removed from the event.

“Tug of War is the longest event and with it being so cold we didn’t want people outside for too long,” Cunningham said.
Since Tug of War was removed, Tina Hoesl, APB President, said the divisions for Pumpkin Bust were combined.

Nathan Garbig, a freshman communication studies major, was part of the winning Sigma Phi Epsilon team and also placed first in the pumpkin pie eating contest.
“It feels awesome to win, because I contributed,” Garbig said. As to whether he will eat pumpkin pie for Thanksgiving, his response was, “It is my favorite pie, but I don’t want to see another one for at least a year.”

Despite the drop in temperature, Pumpkin Bust brought a lot of NKU students out for the event.
“I think Pumpkin Bust went really well. It went a lot smoother than previous years,” Hoesl said.
As for next year’s Pumpkin Bust, students can expect to see a few new events.