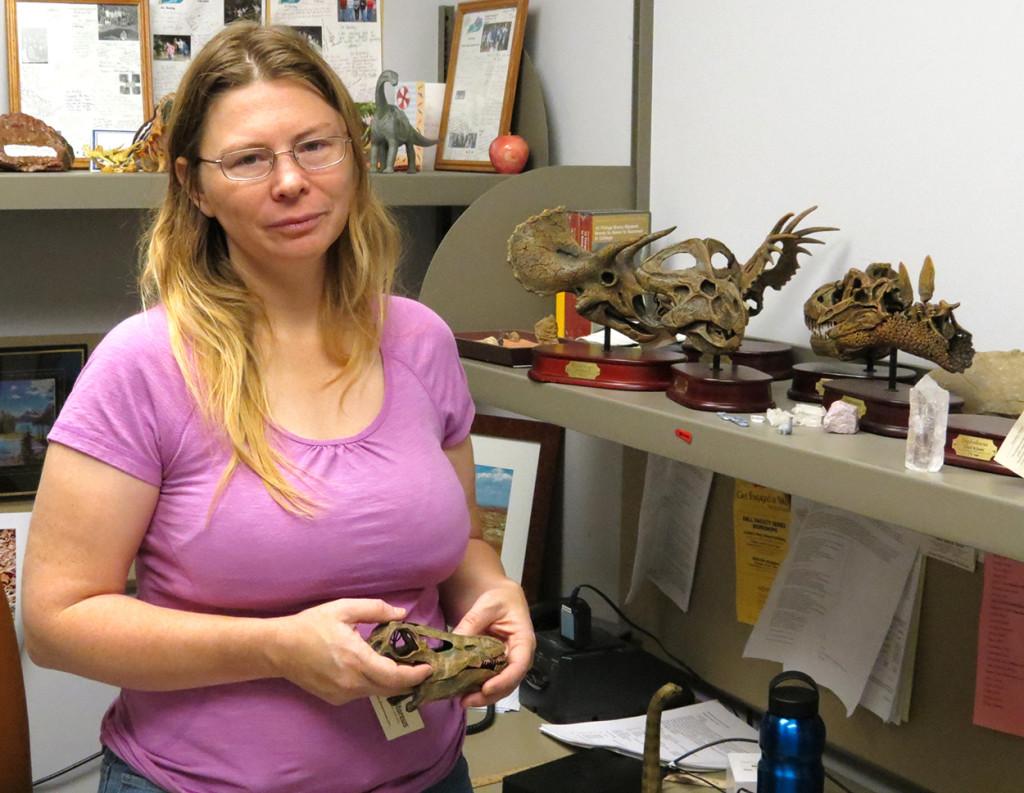 Bertog, professor of paleontology and stratigraphy, is looking at the growth rings found within the femur bone of a sauropod to determine if there was a drought during the time period of this dinosaur’s death. A chemical analysis of the bone suggested the animal was stressed near the end of its life due to drought. She hopes to find similar signs of drought within the growth rings of the femur, which are “just like tree rings,” Bertog noted.

According to Bertog, one of the most unique aspects of the LC-SEM is its ability to examine large objects. “This was kind of a proof of concept thing. We wanted to show that we could put fossils in it that were large, and that the LC-SEM would not damage the fossils,” said Bertog.

The cutting edge LC-SEM can facilitate objects three feet in diameter and three feet high and uses an electron beam to observe objects a quarter of a millimeter in size, Bertog said. With most scanning electron microscopes, researchers can only examine very small fragments of material, no larger than an inch in diameter. The fragments must also be coated prior to examination, which damages the fossils. The LC-SEM does not require the fossil to be coated, unlike traditional SEMs.

All of the fossils being examined by Bertog were found at the Morrison Formation in Utah. This is the site of the only large Jurassic era lake in that part of the country. A section of a femur bone from a sauropod, a tooth from an allosaurus and what is thought to be a new species of iguana were all examined with the LC-SEM.
With the help of the LC-SEM, scientists can determine the types of food the animal was eating close to the time of its death. According to Bertog, the type of food the animal was eating will indicate whether the animal died during a time of drought.

This project led to several other projects for Bertog and her students. The teeth of the small new iguana will be examined under the LC-SEM to determine how the iguana fed and the way its jaw functioned.

Jonny Maldonado will be Bertog’s student working on the upcoming project involving the iguana’s teeth. Another student, Michaela Mitchell, will be studying teeth from a sauropod to determine what it ate.

Samantha Caldwell, geology major, is working with Bertog on the project involving the sauropod femur. According to Caldwell, she discovered the fossil seems to have been crushed over time, but signs of drought could still be found. Caldwell has been on the two-week NKU trip to the Morrison Formation three times. This year the group of NKU students found a new species of sauropod and a crushed crocodile skull. Last year the group found the lower jaw of the same animal, she said.
“The trip to Utah is great for people who like the outdoors and going camping,” Caldwell said. On days the students are not digging at the site, many students enjoy going on hikes and participating in other outdoor activities, stated Caldwell. Her next project will be studying the fossils of turtles found during the trip to the Morrison Formation. This project will look for signs of drought as well.

The NKU trip to the Morrison Formation happens every May. It is open to all NKU students and is two weeks long. It is offered as an elective class called “Field Paleontology.” To find out more information regarding the trip to Utah contact Bertog by email at bertogj@nku.edu.

For more info about the trip, watch this video of Bertog explaining the details: Jurassic fossils research trip explained