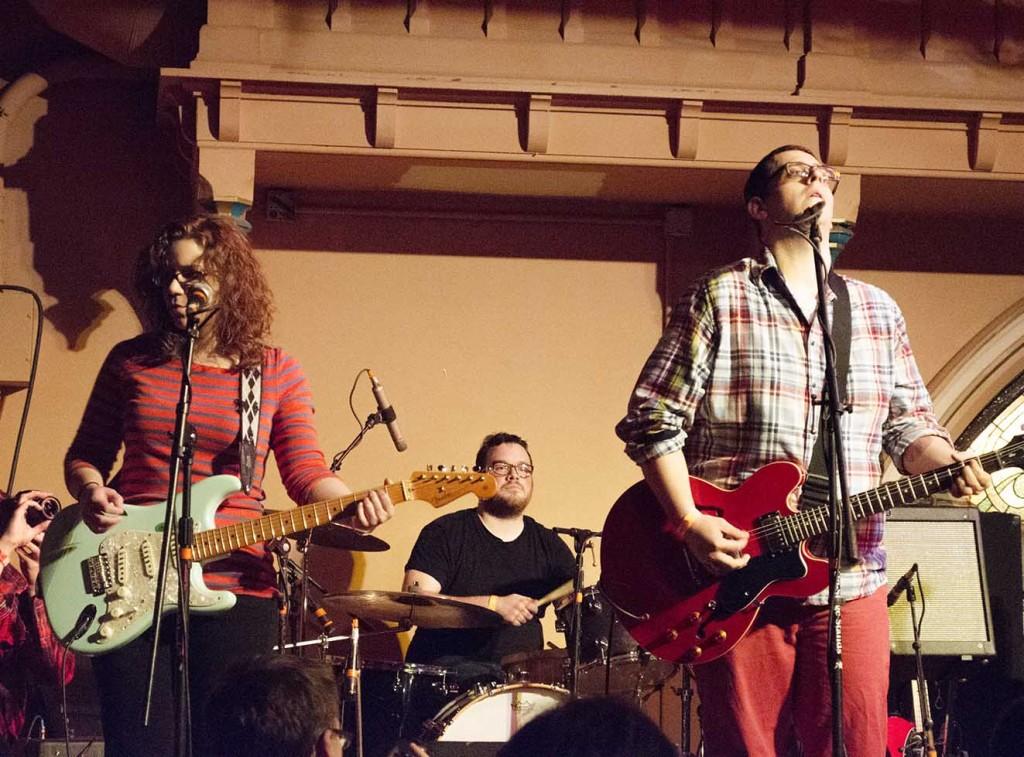 The newly opened Southgate House Revival, located not too far away from the original Southgate House in Newport, Ky., made for a welcome venue to hold the annual Cincypunk Fest. Over two dozen bands split between the lounge and the sanctuary of the renovated Grace Methodist Episcopal Church gave hundreds of live music fans a lot to hear and see.

Cincypunk Fest began as a website in 2001 headed by Adam Rosing, a 2006 Northern Kentucky University graduate, and his then roommate. Not long after, the pair turned the website into a multiple stage concert event, which allowed for local and touring bands to gather together for two nights packed with music.

“It’s a reunion of sorts,” said Rosing. “Old college bands get back together, and old friends reunite.”

However in 2005 Rosing’s roommate moved on from the fest and Rosing took the helm.
Rosing made some changes then, turning the fest into a charity event benefiting a different local charity every year. He also set up a seven-member committee, that would be in charge of choosing the 36 band line-ups and the year’s charity.

The charities supported this year are nonprofits aimed at finding homes for shelter dogs: Save Our Shelter Dogs (from Northern Kentucky) and Recycled Doggies (From Cincinnati).

Cayla Schoborg of Save Our Shelter Dogs recounted witnessing the dire conditions of the bed-deprived and landfill-adjacent Pendleton County Animal Shelter.

“It was very terrible,” said Schoborg.

They ended up raising funding for beds and saving a boxer puppy named Lily. Now the staff of about 10 people has a regular process of spaying, neutering and applying flea medication. According to Schoborg, there’s a lot of work to attend to.

“There’s only a few of us and the shelters are so overcrowded,” said Schoborg.

The changes have been good for the fest, granting it more publicity and popularity.

“[Every year] is a mix of excitement and nerves,” Rosing said. Especially this year which adds the pressure of reopening the Southgate Revival House, which has been such an important venue in the Cincinnati music scene.

The pace for this weekend was set with Friday night openers Dessa Sons, who provided anguished vocals, furious drumming, and impressive guitar technique that embodies the spirit of punk rock.

The heaviness did not stop there, with bands such as Ampline and Mala In Se providing a thunderous soundtrack that made a strong case for earplugs. The very sight of a double neck guitar in their arsenal lets you know right away that Mala In Se meant business.

Arguably the most energized performer of the weekend was the lead singer of White Walls who began their set on Saturday with two layers of shirts but concluded it shirtless.

He also fixated his mouth on the microphone as much as he possibly could. Other memorable moments, both on and off stage occurred during the performance by the noisy Team Stray, when one of their members used his tambourine as a makeshift hat. Later on in their set was the lone crowd-surfing sighting of the weekend.

Was it all terror and destruction at the Southgate House Revival? No, in fact even with names on the bill such as Knife the Symphony, Smoke Signals and Mad Anthony, there was still room for more dialed-down sounds.

One band that received some of the most rapturous response was The Pinstripes, a soulful ensemble of six musicians that included a saxophonist, trombonist, and trumpeter. Their performance in the larger sanctuary room brought the crowd to its feet.

The Lounge closing act on Friday night, Al Scorch, played a memorable set on the floor, rather than onstage. Equipped with a guitar, fiddle, banjos and overalls, Al Scorch’s show was infused with rural feelings.

The Lounge was something of a sanctuary for those seeking to avoid the more aggressive style of most of the bands inside of the actual Sanctuary. Those not wanting to be pummeled by Mala In Se’s aggression could vibe out to the country sound of We Are Snapdragon, who were the only band of the weekend to feature a guitar played with a bow.

Not everything went according to planed. Sets by The Seedy Seeds and The Frankl Project on Friday and Saturday night respectively, were delayed due to extended sound checks. One band, For Algernon couldn’t make their scheduled appearance and instead we were treated to the steady tempos and acoustic guitar of Shiny Red (who temporarily dubbed themselves “Shiny Red For Algernon”)

Nonetheless the show must go on and go on it did. The Southgate House Revival had been revived through months of planning and renovations, but the finishing touches were put on when hundreds of music fans from in and around Cincinnati gathered for a weekend they won’t soon forget.