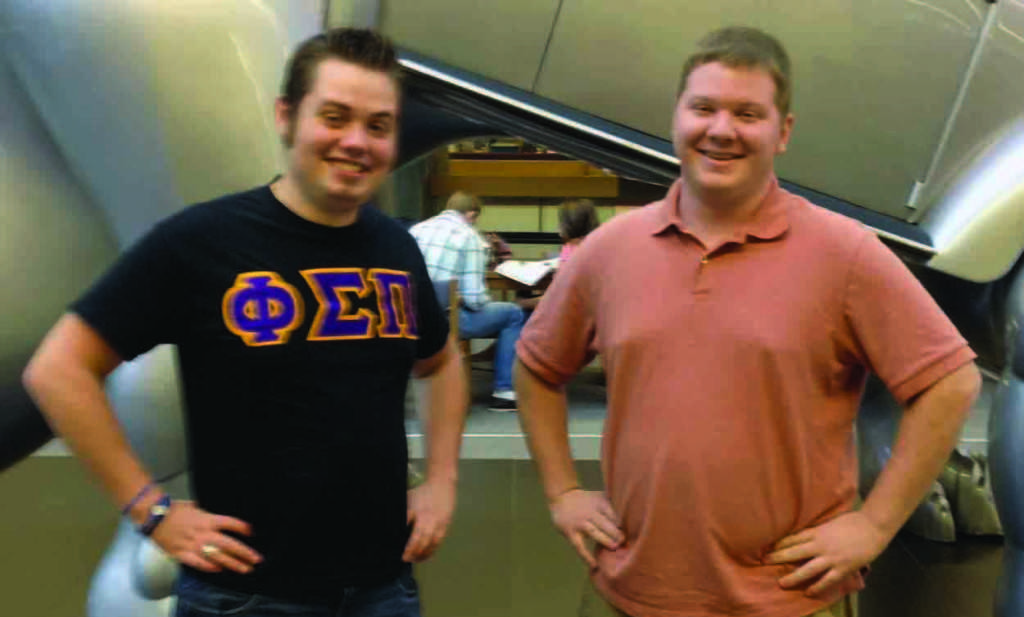 Not everyone gazes upon a mundane looking staircase and asks themselves how it could shed light on a city historically, socioeconomically and geographically. But that is exactly what two Northern Kentucky University seniors have done, and on a grand scale.

Andrew Boehringer, a history and anthropology major, and Shane Winslow, a history, anthropology and integrative studies major, are in the process of publishing a book which takes a closer look at the many stairways of Cincinnati in order to showcase the Queen City’s past. They also created an internship for themselves in the process. The duo met in a spring 2012 history class.
Boehringer said the idea for the book came to him as he was driving to school and noticed an abandoned stairway.

“I was just driving along and there’s a staircase that goes from Central Parkway to McMicken [Avenue], and I thought to myself that would be a cool paper topic, how did people use it?,” he said.

He wanted to know why the staircase was abandoned and why no one had decided to fix it. He told Shane of his interest in the staircases and the history behind their construction, and that very day the two decided to write a book and went walking the city’s stairways.

Their book, tentatively titled “Descent: A History of the Staircases of Cincinnati,” has been a tedious, but enjoyable, process for the two. It is their passion for history, and copious amounts of coffee, which keep the two going after adding 30 hours-a-week research time to an already busy college schedule.

“In general, there have not been very many publications in the United States about stairways, at least looking at it from a cultural aspect anyway.”

Winslow then explained stairways have become important in Cincinnati’s history due to the city’s ever growing need for space and subsequent expansion into the seven surrounding hillsides. The two added that of the 600-700 staircases in Cincinnati, 400 are controlled by the city itself. The Department of Parks and Recreation and private owners maintain a couple hundred more.
Boehringer and Winslow each have their own particular topics which they research, but both review the broader historical documents and charts.

The seniors met in the history class World Culture Through a Dozen Meals. The two praise the history department and the support they have received from the department’s faculty throughout the process of writing their book.

“The class World Culture Through a Dozen Meals was very open to begin with, and it was very independent research driven every week,” Boehringer said. “I think just the general nature of that class gave an atmosphere for us to get to know each other on an intellectual level.”

Winslow refers to the history department as a “race species.” The two said they received a great deal of help from the professors in the department, one even going so far as meeting with them on a regular basis last summer.

“Professor Fred Mitchell was one of the first people we had contacted as to where we could find data and public works records, our first contacts and how to go about the research in general,” Boehringer said.

Mitchell was able to share a great deal of knowledge with the two students, and they make it clear he was fundamental in the beginning stages of their endeavor.

“The professors in the history department are not here to baby you or help you, but they will support you and help you grow into something bigger than yourself,” Winslow said.
The two have been very busy over the past few weeks. They have been interviewed by several local media outlets, including the Cincinnati Enquirer and Soapbox Media. They have also finalized an internship with the Cincinnati Department of Transportation. Boehringer credits Winslow’s outgoing personality for landing the internship. On their way to visit the Engineering Department, Winslow struck up a conversation which led to the students being offered a room to work out of within the Department of Transportation.
“Our interest is something that they need and something that they just don’t have,” Boehringer said.

Walking the staircases has been a fun experience for the two. In addition to getting exercise, the two have some funny stories to tell now.
“We were walking up some stairs in Walnut Hills and people began throwing things like rocks or candy at us,” Boehringer said.
“There is some danger to walking staircases,” Winslow said.

The two feel the staircases of Cincinnati are still a viable option for commuters. For an experiment, the two raced each other up the Young Street steps. Boehringer drove his car along the quickest route, and was beaten by Winslow by a minute. This exercise showed the major difference in time it would take to drive the route the car took opposed to walking the stairways.
After finishing their studies at NKU, Boehringer plans on attending graduate school at the University of Michigan or Boston University. Winslow plans on attending graduate school at Texas A&M University.