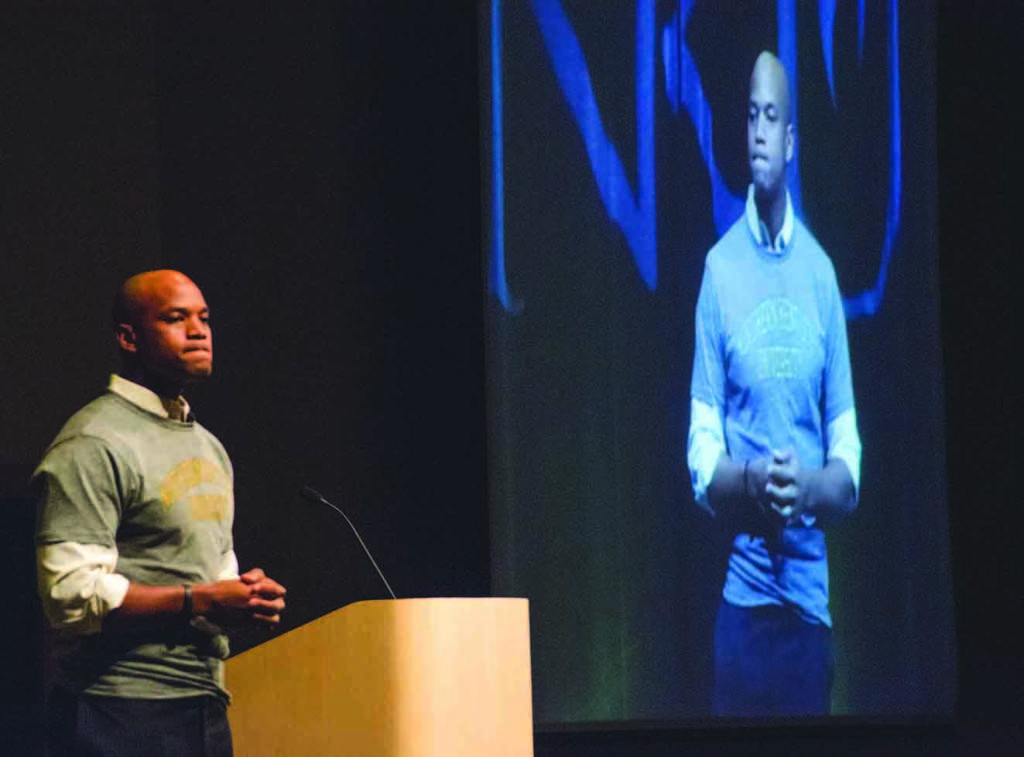 The ballroom in the Student Union was filled with whispers of anticipation as students anxiously waited for Wes Moore, author of “The Other Wes Moore,” to come on stage on Sept. 25. All of the seats were full and some students and faculty were standing against the walls, just to hear him speak. Some students attended because they were required to by their University 101 and English classes or just because they thought the story was intriguing.

Moore began the conversation about college and how impacting it is on a young person’s life. Not just the education side of it, but the experiences and networks students can make here shape who you are forever.

“I was already inspired when I read the book and I’m inspired more now,” Kacey Ruebusch, freshman biology major, said. “It made me realize that college is an experience of making someone of myself.”
He said that he received his undergraduate degree 11 years ago and not once does anyone ask him what his major was, what grade he received in a certain class or what his score was on an exam. People ask him what he has done to better the community, what he has been involved in and how he has impacted others.

Moore then began talking more about his book, “The Other Wes Moore,” which is what most of the students came to hear about. He touched on his relationship with the other Wes Moore and said he has known him for more than a decade. He knew him for years before he even thought about wanting to write a book.

He really emphasized the impact one tiny thing can have on the rest of your life. He said the book wasn not about him, or the other Wes Moore either. It was about all of the Wes Moores, the people who are one decision away from going down one path or another. That they are in our classrooms, our workplaces and our homes.

“I really liked when he said it was bigger than the two sharing the same name, that there are Wes Moores everywhere. It opened my eyes,” Ruebusch said.
“You can’t understand my story unless you understand Wes’, and you can’t understand his story without understanding mine,” Moore said. His genuineness of that statement and of his relationship with the other Wes Moore became incredibly apparent to the audience.

His humor had the room filled with laughter and conversation about not liking the title of his book at first. His seriousness had the room so silent you could hear a pen drop when he discussed the other Wes Moore.

He said his book was not about a certain race, a socioeconomic class or a certain event, it was about everybody and how you become who you are.
Wes Moore finished the conversation with answering questions from students, who made up most of the audience. He addressed what his motivation was, his 16-month-old daughter, military school, and some other personal aspects of his life.

After the conversation he signed books and conversed with students for over an hour.