A spotlight on stage management 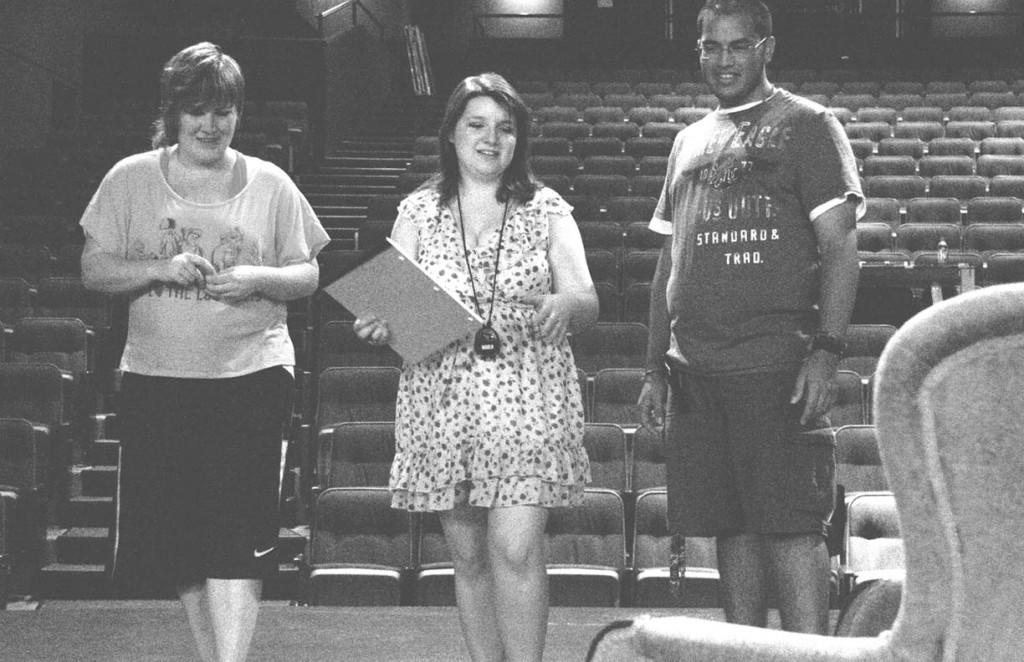 A mixture of rehearsal music, creating its own unique medley, echoed through the maze of hallways leading to professor Brian Robertson’s cozy office in the Fine Arts Center. Robertson and Rachel Burson, who will be graduating from Northern Kentucky University this spring with a degree in stage management, were chatting over lunch.
The NKU theatre season is upon us. During a joint interview with Robertson and Burson, the spotlight shifted from cast to crew as they helped explain the life of a NKU stage management student, a program one must interview to get into. Here is a glimpse into the organized chaos of stage managing.

According to the American Association of Community Theatre’s website the list of stage manager responsibilities includes scheduling and running rehearsals, coordinating the stage crew and calling cues. They also document all blocking, and the light, sound and set change cues.

Robertson summed up those duties. “Stage managers are responsible for everything that feeds into what goes on stage,” he said. “They are like the beating heart you can’t see, but they are constantly implied to everything that’s on stage.”

The main stage productions at NKU have faculty directors and often faculty design positions, but students take on the rest. Typically three managers are assigned for most performances, Robertson said.

“I make assignments based on where people are in the curriculum and what I think is the next level of experience that they need to take on,” he said.
According to Robertson, the best way to train stage managers is to get them working right away. “I troubleshoot, interact and communicate. I work behind and with them, but I don’t stage manage it for them.”

Students are not required to have internships, but Burson explained the importance. “Most of theatre is hands-on experience. What better way to see the professional world than to actually work in it?”

Despite the economy, Robertson said stage management is actually thriving.

“The number of people in the program is increasing,” he said. “We had a very high watermark coming into last year, we graduated close to five stage managers between two semesters. We’re a little under that number now, but we are staying consistent in terms of new students coming in with interest.”
“Another great career path for stage managers is that they are perfectly placed to move up the ladder in terms of becoming production managers and artistic administrators because they understand very closely how the facility works,” said Robertson.

Burson detailed her experiences. “You got to have a lot of nerve and tough skin,” she said. “This is not a reward-driven job. Recognition would be nice but it’s never expected, that’s just the nature of the beast. The best thing that can ever happen to me is when I do a show and the actors get a standing ovation. A standing ovation is for everybody because we all did it. It’s a group thing.”

Burson said her goal is to build her resume and go into movie production. Between her internship at the Ensemble Theatre in Cincinnati, summers spent interning at summer stock theaters, the school year divided between NKU productions and a full schedule of classes, and her senior project, she isn’t left with time for much else.
“There ain’t no rest for the wicked,” she said.