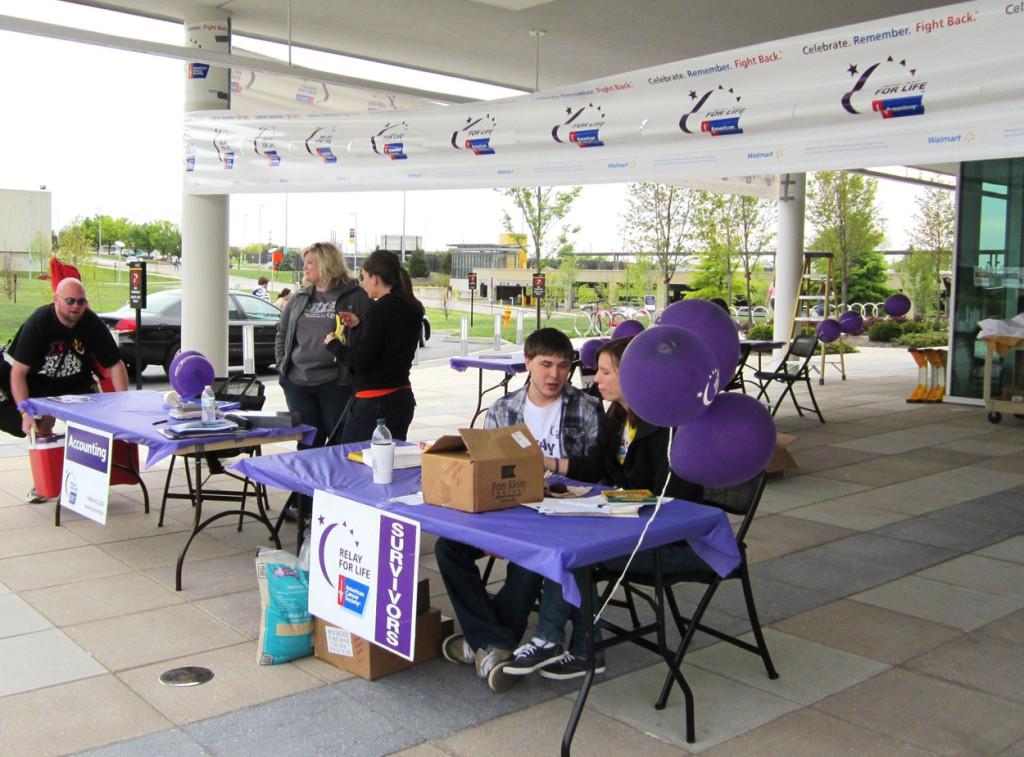 The lawn in front of Griffin Hall was draped in purple on Friday, April 13, as Northern Kentucky University students, staff and community members geared up for the American Cancer Society’s Relay for Life walk-a-thon.

Bodies, balloons, benches and blankets sported the color purple to show support for the event and the fight against cancer. Relay for Life is the largest non-profit fundraiser worldwide in which teams work together to stay walking for a total of 12 hours.

“Relay for Life is not just a fundraiser,” said Northern Kentucky Community representative of the American Cancer Society Courtnie McKinney. “It is a unique opportunity that is about empowering individuals to fight back against a disease that has taken so much from them.”

The team-oriented event went overnight, lasting from 6 p.m. to 6 a.m. with one member of each team remaining walking at all times. According to McKinney, over 100 participants registered to take part and roughly 1,000 people were expected to attend.

NKU sophomore Sarah Napier said, “I have been participating in Relay for Life for the past five years, because I’ve had three family members pass away from cancer.”

The Relay for Life is a signature event of the American Cancer Society, with the goal of bringing communities together to celebrate cancer survival and remember those who have lost the battle with the disease.

Tents and blankets covered the lawn as dozens of NKU students, including several branches of university Greek Life, alumni, faculty and community members, walked the circular surrounding sidewalk. While music resounded throughout the campus, scores of supporters turned a once-empty patch of grass into a place of courage and companionship.

Junior public relations major Rebecca Potzner said she took part in the event because “It’s a fun way to fight cancer.”
“It really hits home because both my grandmothers had breast cancer, I lost my grandpa to lung cancer and a close friend also battled cancer,” Potzner said.

Since its start in 1985, Relay for Life continues to garner fundraising, advocacy and support from communities across the country. Cancer affects every member of society in one way or another, and Relay for Life is a way to fight against the disease together.
“Today is the four-year anniversary of my grandpa’s passing from cancer,” Napier said. “I’m really glad that I could come and celebrate and remember him.”

McKinney said the total amount raised from the event for cancer research is currently being processed and will be available later this week.