Teetering to a new record 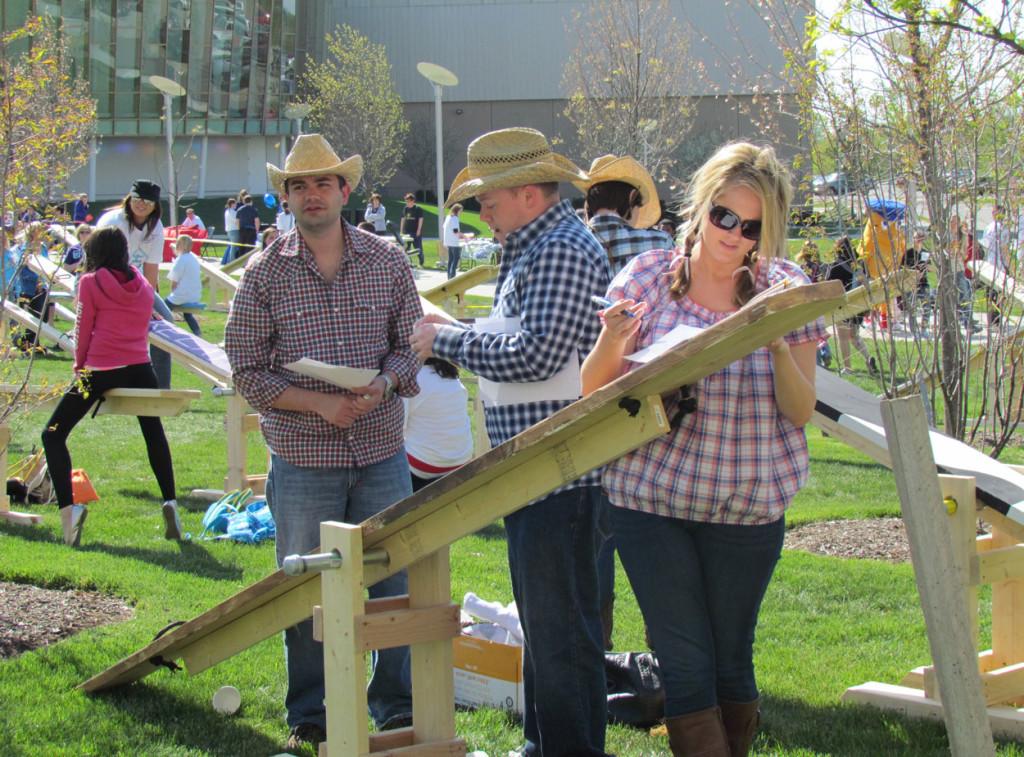 Hundreds of people gathered onto the grassy knoll just in front of Griffin Hall on Monday, April 9 for Teeter-A-Thon hosted by NKU Dining Services. The afternoon was warm, the sun was out and an intense breeze kept everyone on their feet as the crowd consisting of NKU students, faculty, alumni and neighboring citizens attempted to create the Guinness Book of World Records’ title of “Most people teeter-tottering at one time.” To set the record, 100 teeter totters had to be moving at once; for the actual event there were 102 teeter totters, which means that around 204 people participated, according to Janelle Craft, marketing director for NKU Dining Services. The only qualification the participants had to achieve was to teeter for five minutes, although the goal was to go for seven minutes instead in order to ensure the record.

“I think this is great idea for the university,” said computer information technology major Kristin Bibbins. “It’s easy at an event like this to have a lot of fun and really help out the cause.” Bibbins remained a bystander for the record-breaking attempt rather than a participant.

Participants and observers alike were able to join in on several other activities throughout the event, such as the NKU Dining “Battle of the Chefs,” where NKU’s chefs faced off against each other and against the clock for the honor to be named top NKU chef.

Several reputable companies from around the area were there to join in on the fun. The radio station Q102 supplied the music, while promotional characters like the Chik-fil-A cow and Mellow Mushroom Pizza mushroom were there to enhance the exciting environment. The Cincinnati Ben-gal Cheerleaders also made an appearance.

Multiple prizes were awarded, including awards for the best-decorated teeter totter and the team that raised the most money. Prizes included more than $500 worth of gift cards to local restaurants, stores and entertainment venues. The event also included tables hosted by various campus and community “green” organizations and vendors. The tables, music, raffle, games and prizes all encouraged people to choose a “balanced” lifestyle.

“I just really love teeter totters,” said sophomore geology major Jessica Damron. “Plus we both are here for the Guinness World Record title.” Damron and fellow teetering partner, sophomore psychology major Brooke Yancey, teetered on their custom made Phi Sigma Pi teeter to display their school spirit and affiliation with the university.

The Guinness World Record title may have been the highlight of the event, but the attempt to raise funds to bring BigBelly Solar waste and recycling containers to the university was the underlying theme. BigBelly Solar will help NKU to decrease the university’s carbon footprint with the use of these solar-powered compacting receptacles.

Results on whether the record was broken or not are still being determined, as well as how much total money was raised from the Teeter-A-Thon event. According to Craft, the witnesses that were present at the attempt said that the participants met the requirements to set the record. The next step is to send the photos, video and witness statements to Guinness and wait for their verification that the record was set.