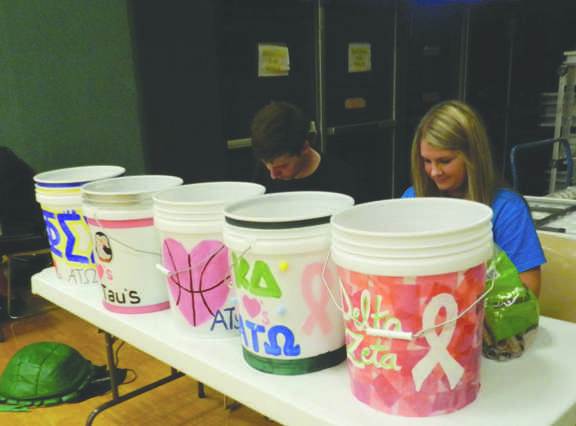 Beginning March 12 and continuing through March 23, the brothers of ATO held a penny war to raise money for breast cancer research. The event was held on the second floor of the Student Union Monday-Friday from 10 a.m. to 2 p.m. March 19 through March 23 ATO’s Eggerator took place outside between the Student Union and University Center, where participants were able to throw eggs at the brothers of ATO. By the end of each day, the men were covered from head-to-toe in egg yolk.
“Well over 120 dozen eggs were thrown throughout the week,” Jessie Wynne said.

Wynne said their strategy was to get more recognizable names within the fraternity to participate in the event in order for more eggs to be thrown. One dollar supplied two eggs to throw where as five dollars supplied an entire carton.

“On Wednesday one kid bought about six dozen eggs and threw the majority of them himself,” Wynne said.

Preceding this messy event, the gentleman held a benefit dinner Friday evening at the Highlands Country Club in Ft. Thomas, Ky. with their fraternal members, parents and alumni present. The ATO basketball marathon on Saturday concluded the week of events. All four events raised money for breast cancer research and the proceeds will be donated to St. Elizabeth Healthcare. According to Wynne, ATO raised $8,140 from their events.

Delta Gamma held their annual Anchor Splash to raise money for the Delta Gamma Foundation, Service for Sight. Participants are broken up into teams and partake in the events variety of pool games. The event took place March 23 from 9 p.m. to midnight.

The sisters of Delta Zeta were scheduled to hold their second annual Turtle Tug on March 24 from noon to 3 p.m. at the intramural fields, where teams of five were to participate in a tug-of-war competition over jello.

“We raised over three grand last year and hope to reach the $3,500 mark this year,” said junior marketing major and current president of Delta Zeta Cassie Juniet.
It cost $50 per team to participate in the event.

The night before Turtle Tug, the Facebook event page said, “Due to the inclement weather we had today we will not be allowed on the intramural fields tomorrow.” The event will be rescheduled for next semester, and proceeds will be donated to the Painted Turtle Camp, DZ’s national philanthropy.
Although Delta Zeta was unable to host their event, it still remains that service and philanthropic activity was popular among the Greek community this week. Greek and non-Greek members had the opportunity to raise money for many charitable organizations.