Blood from brothers for a brother 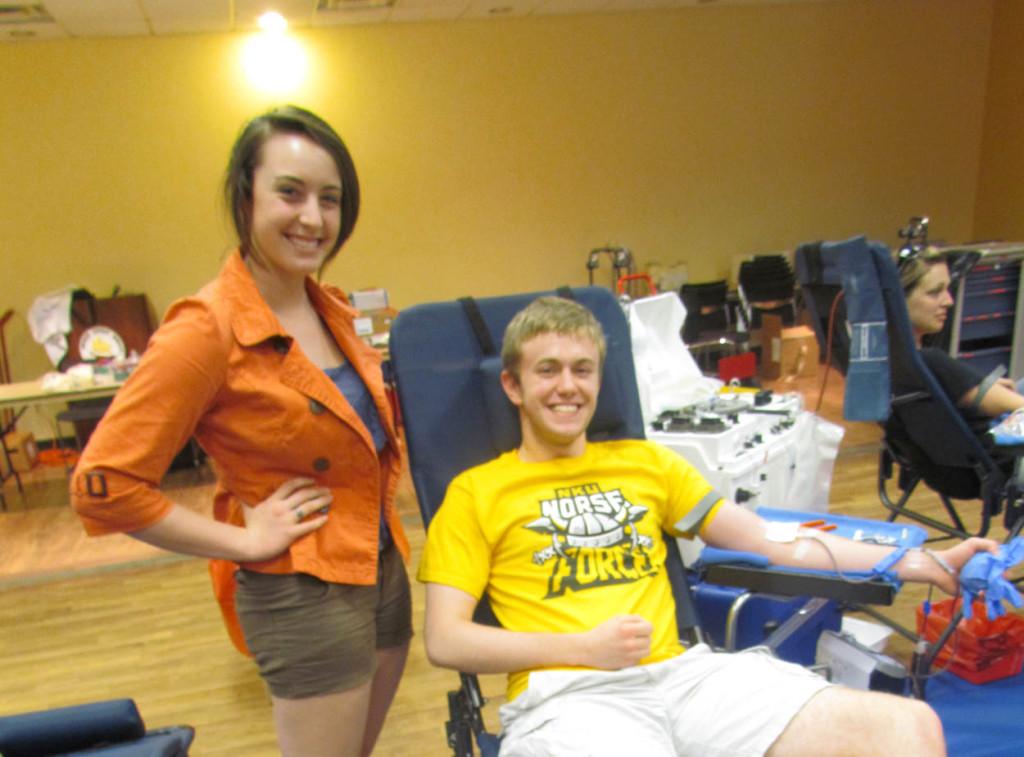 On a sunny afternoon while many enjoyed the weather outdoors, others stayed cool in the air conditioning and gave blood that will benefit treatments for Travis French, a former Northern Kentucky University student and past president of Tau Kappa Epsilon. French is currently fighting acute myeloid leukemia.

The blood drive held in the University Center Ballroom March 22 was held in French’s name, who was able to attend the event. French is known to his peers as an outgoing and upbeat guy, and that’s the persona he displayed on Thursday.

“Travis is one stand up dude,” said Justin Jett, alumni of TKE and coordinator for membership and business services at the Albright Health Center.
The two were in the pledge class of 1998 together and have been friends ever since.

“He’s very charismatic,” Jett said. “Once you meet him you always remember him, you want to get to know him and spend time with him. We call him sunshine; he can always put that smile on.”
This notion about French isn’t unfamiliar. Jeremy Moore, alumni of TKE and first year graduate student in the master’s of public administration, said almost all of French’s graduating class are a close-knit group of people that still keep in touch.

Moore learned of French’s diagnosis a week after he had visited JerZees Pub & Grub located in Newport, Ky. French is a partner in ownership at JerZees and Mainstay Rock Bar in downtown Cincinnati.
“It was about a week after I found out that the fraternity did,” Moore said. “We were all shocked.”

The blood drive was coordinated by Brent Rowland, alumni of TKE who works for Hoxworth. Moore said the fraternal members, both active and alumni, plan to hold another event in the future in French’s name.

According to French, Hoxworth was very happy with the results from the blood drive. Over 100 people signed up, and 76 units of blood were received.
Blood that French is able to utilize will go towards his treatments throughout the next four months; anything else will be available for immediate use for others in need.
French currently goes to a leukemia specialist, Dr. Winkelman.

“He prepared me,” said French. “I’m one of the fortunate ones that responded to the first round of chemotherapy.”
Winkelman told French that his young age had a lot to do with it.

At 32 years old, French has three children: Tate, 11; Caleb, 4; and Harper, 19 months. He and his wife Jill will be married six years in October. French said that Jill saved his life.
French began getting sick in the middle of December. He first noticed his gums swelling, which is the number one sign of leukemia, but didn’t think anything of the sort. He saw a dentist and said his gums instantaneously began feeling better,, but he continued to feel sick. French felt fatigued and experienced a loss of color and appetite. In a short time, he went from about 240 lbs. down to 181 lbs. French was tested for mono and strep three times before the doctors diagnosed him with mono.

Monday Feb. 6, French went to work, and upon finishing everything he needed to do, he proceeded to take a nap from 1-7 p.m.
“Jill woke me up at seven and said we’re going to the hospital and I kind of got upset with her,” French said. “I’m just tired from the mono, I told her.”
Dr. Dozier, the emergency room doctor, ran blood work and immediately diagnosed him with leukemia.

“It caught us off guard,” French said. “The doctor said my body was shutting down. Had Jill not woken me up, I probably wouldn’t have woken up in the morning.”
Currently French is in remission. Throughout his treatments over the next four months, the doctors will be checking to make sure his bone marrow rebuilds itself without the leukemia. He won’t be declared cancer-free until the six-month mark.

Acute myeloid leukemia is a cancer of the blood or the bone marrow that creates thousands upon thousands of weak white blood cells that overcrowd the body and can shut down oxygen to the brain, according to French.

“I was told that 1 in 3 people will develop some kind of cancer in their life time,” he said. “It’s an amazing statistic that shows you how tough cancer really is.”
French said that he is fortunate to have been involved with so many people throughout his life and is grateful through the blood drive in his name that he was able to help out a little bit.
Nicole Barkalow, freshman graphic design major, stood near David Trump, fellow freshman and theater major, as he gave blood on Thursday.
“I heard Travis had leukemia and I’m here to help out any way I can,” Trump said.