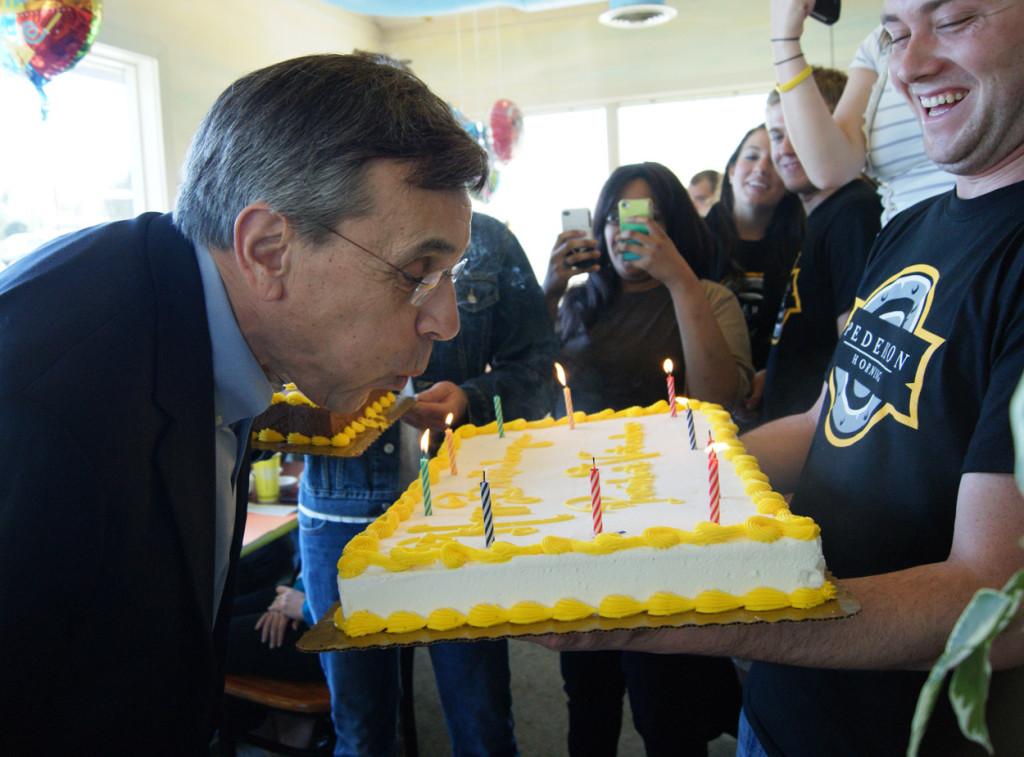 Throughout the year, students of Northern Kentucky University have found several ways to thank departing President James Votruba for the contributions he has made to the school during his 15-year tenure. That sign of gratitude came in the form of a surprise birthday party on Tuesday, March 27.

Votruba’s executive assistant Katie Herschede organized the open invitation event along with the help of SGA President Dustin Robinson. They used Facebook as a means to spread the word about the party to several NKU students and faculty members. The surprise party took place at Skyline Chili on Martha Lane Collins Boulevard in Cold Spring, Ky.

Several attendees of the party felt that this means of thanks was just a minor way of showing Votruba their appreciation for all that he has done for NKU.

“I don’t think anything that we do is ever going to be enough to show him our thanks,” said Norse Force President Sara Daugherty. “The things he has done for this university is so enormous, and everyone is extremely grateful. There’s no way to truly show him how thankful we are for him.”

Some students recounted all the great things they felt Votruba had done for the university. One thing that seemed to be a constant contribution was Votruba’s ability to personally connect with all of NKU’s students.

“I started as a student in 2000, and I’ve been a part of this program ever since,” said coordinator of new student orientation Jeff Iker. “As a student, he learned my name and interacted with me on several occasions. He made it a really personal experience for me. That’s why I stayed and worked here.”
Votruba responded to that by saying the commitment he has made to NKU has been an easy one to make.

“This is a wonderful school that’s made up of wonderful faculty staff and students,” Votruba said. “This was the easiest commitment I ever had to make.”
When talking about the next possible university president, Votruba said the most important thing that he or she would have to do is to fall in love with the school as quickly as he did.
“They need to understand what a special place NKU is,” Votruba said. “If they can devote all of their energy and time to this place, they can continue to take it to greater levels.”