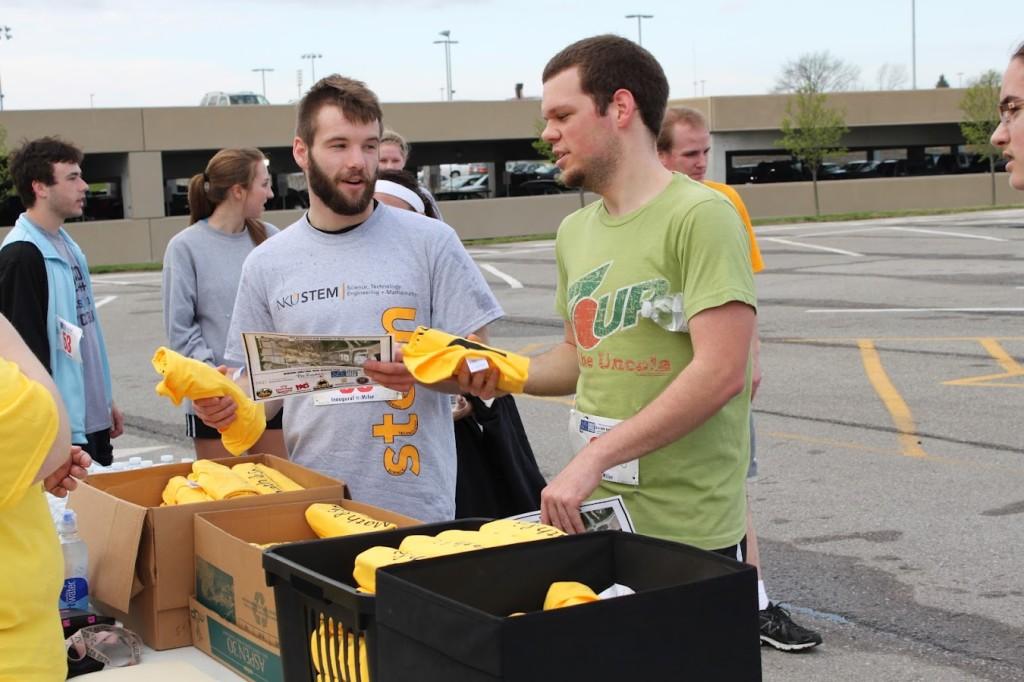 The morning of March 17 dawned to gray skies. As the morning progressed, however, the clouds parted and a rainbow shone through as the participants in the Pi-Miler anticipated the start of the race. The inaugural Pi-Miler, hosted by the Math and Stat Club, brought in many student and faculty participants in order to raise money for club events to take place throughout the year.
Just as it sounds, the Pi-Miler was a race that embraced a Pi Day theme by having participants run 3.14 miles across Northern Kentucky University’s campus. About 60 contenders awaited the command to “on your mark, get set, go” from Bethany Noblitt, faculty member in the math and statistics department.

Noblitt, along with her fellow faculty member Brooke Buckley, revived the Math and Stat Club in 2009, Noblitt said. For the event on Saturday, they accumulated participants and volunteers through word-of-mouth, she said.

According to Buckley, about 20 volunteers helped with the race.

“The volunteers were pretty awesome,” Noblitt said. “Giving up your Saturday morning is a big deal.”

Volunteers were placed throughout the course to guide students and faculty through parking lots, past the lake and around the Bank of Kentucky Center, then back to Lot K, where the race began. Volunteers also showed their support of the runners through encouraging words. But running was not a requirement for this event; some walked.
The Pi-Miler was a dog friendly event. About five women brought their dogs, which seemed to decide the pace at which their owners completed the course. Within about an hour of its start, the race concluded and was followed by the presentation of door prizes. Many walked away happily with prizes such as gift cards to Subway, Buffalo Wild Wings sauce and vouchers for free subs at Jimmy Johns, among others.

Although the Math and Stat Club isn’t an official student organization, its goal is to bring students together outside of their normal learning environment and engage in various activities, Noblitt explained. Proceeds from the Pi-Miler will help fund events such as the Amazing Mathematical Race, which is coming up in April.
The race bounces off the idea of the show “The Amazing Race.” Noblitt said all activities involved are very accessible.
“You don’t have to be a math major to be able to compete,” she said.

For any information regarding the Math and Stat club, email either Bethany Noblitt at noblittb@nku.edu or Brooke Buckley at buckleyb1@nku.edu.