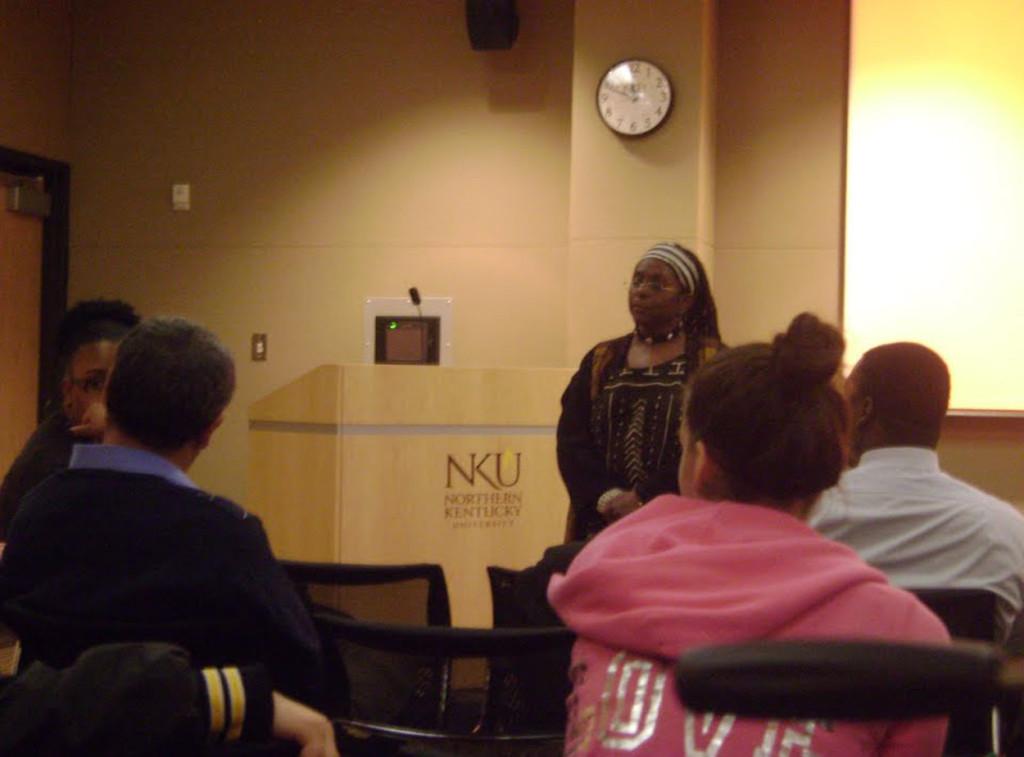 As part of NKU’s continuing celebration of Black History Month, former NKU Assistant Dean for African-American Student Affairs Pamela “Safisha” Hill offered a free public lecture to students and faculty at the Student Union Feb. 16. It coincided with this year’s nationwide theme of “Black Women in American Culture and History”.

According to African-American Student Affairs Director Dannie Moore, the student affairs program and Xavier University worked together to bring Hill to both campuses because she was instrumental to race relations on both campuses.

“Dr. Hill is an outstanding speaker that is committed to higher education. She truly values Black Studies and educating students,” Moore said.

In her presentation, “Black Women, Black Power, and the Struggle for Black Liberation,” Hill stressed the origin of Black History Month. “February is celebrated as Black History Month not because it’s the shortest month of the year,” Hill said, “but because Dr. Carter G. Woodson, who in 1926 started with his fraternity, a thing called ‘Negro Achievement Week’ to recognize the accomplishments of black folk.”

In 1976, America’s bicentennial, Negro Achievement Week was expanded to the entire month of February to what we now know as Black History Month. During that month in 1976, President Gerald Ford celebrated with an urgent message for Americans to “seize the opportunity to honor the too-often neglected accomplishments of black Americans in every area of endeavor throughout our history.”
Hill featured many women who have made a significant contribution to American history. Popular figures such as Rosa Parks, Harriet Tubman, Sojourner Truth and Michelle Obama were profiled. She took interest in profiling unknown African-American women many people may not have heard of. She also profiled Cathy Williams, who in 1866 posed as a male to enlist in the United States Army, and voting rights activist Fannie Lou Hamer, who coined the phrase, “I’m sick and tired of being sick and tired.”

Hill said that Black History Month is important to learn because today’s society does not learn enough about history.

“We all have stories that are very important,” Hill said, “None of us got here because of what we did, but because somebody came before us, and broke down barriers, and kicked doors, walls and windows.”

According to NKU’s website, Hill has over 20 years of experience in teaching African-American studies. She currently serves as an adjunct professor for cultural studies at Ceder Valley College in Lancaster, Texas.