Norse Film Society gets a reboot 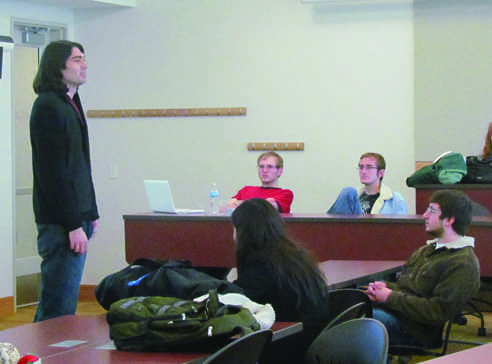 With the fall semester coming to a close for students, Norse Film Society will be ramping up the production of their first film under the supervision of Norse Media producer-director and electronic media and broadcasting lecturer Bavand Karim. A meeting was held on December 2 in Griffin Hall to discuss the film’s production.

Since “rebooting” the group, NFS has generated enough interest from communications majors to begin production the group’s first student-made film this semester. At the meeting, around 20 students met to discuss the tasks and duties required to get the project going. A slide show presentation listed the jobs of finding students to volunteer for tasks ranging from camera operators and costume designers to caterers and fight choreographers.
Students who attended the meeting were eager to offer themselves as role-fillers for these responsibilities, including junior electronic media and broadcasting major Taylor Romer, who is the co-director and co-writer of the film.

“Making the movie is going to be really fun but will be hard work for a few days,” said Romer.

The working title for the treatment is “Superhero Intervention.” The script was penned by Karim while waiting for an airplane flight. The plot is based around Spider-Man, who is suffering severe emotional problems as result of the burden of being a hero. Captain America and The Punisher are trying to get Spider-Man to put the beer bottle and bong down to help fight crime again. The humorous and action-filled treatment utilizes several familiar characters from the DC and Marvel comic universes, including Thor, Wonder-Woman and Wolverine.

“This is not dynamic acting where you need to be immersed in the script,” said Karim. “Just show up and be believable.”

Film production is set to take place from Dec. 16 to 19. With locations still being considered, filming on NKU’s campus will be one of the likely locations for shooting. The group aims for production to begin at a time when students are returning home for the holidays. This presents a challenge, as worries over people failing to oblige their commitments to the shooting could become a reality.

“Seeing yourself on-screen from a project you helped make is a rewarding feeling,” said Karim.

“The hope is that once this film is complete, more projects will follow, and the community will see them, and NFS will grow more notoriety,” said Karim.