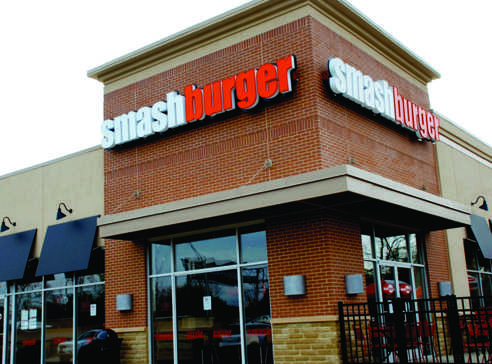 Smashburger opened on Oct. 19, making it the newest eatery to surround Northern Kentucky University’s campus. Opened by Scott Snow, he is trying to live up to his mission for Smashburger to be “every city’s favorite place for burgers.”

Often compared to other local burger joints, such as Five Guys Burgers and Fries, Smashburger’s character appeals to students and other guests.
“It has a really nice atmosphere that makes it a perfect college lunch spot,” said NKU senior media informatics major Spencer Harden. “I definitely wouldn’t call it better than Five Guys, because it’s pretty much on the same level taste-wise, but the Smashburger location is much better for NKU students.”
In an interview with Jeff Mckinney, a Campbell County reporter for the Cincinnati Enquirer, Scott Snow explained Smashburger appeals to all ages and that it differs from other national hamburger franchises because of its diverse menu.

According to the Mckinney interview, Snow explains that though the restaurant appeals to many ages, it is not a fast food place and does not have a dollar menu. Lunches range around $8 and dinners around $12.

Pricing is the only deterrent when it comes to Smashburger, according to NKU senior criminal justice major Joel Nicholas. “I ate there once, and it was pretty good. I liked the wide variety of burger options, but it’s a little on the expensive side, at least for a college student budget.”
Smashburger gets its name from the process in which the burgers are prepared: Angus burgers are “smashed” on a grill. Though the menu primarily focuses on made-to-order burgers, the restaurant also offers chicken sandwiches, hot dogs, salads — even ice cream, beer and wine.

This Smashburger location is the first to land in Northern Kentucky, but Snow has plans to open 12 more establishments within the next five years in Boone, Kenton and Campbell counties in Kentucky, and Clermont and Hamilton counties in Ohio.

This burger joint is off to a good start in its first month of being open, but only time will tell if Smashburger becomes this city’s favorite place for burgers.