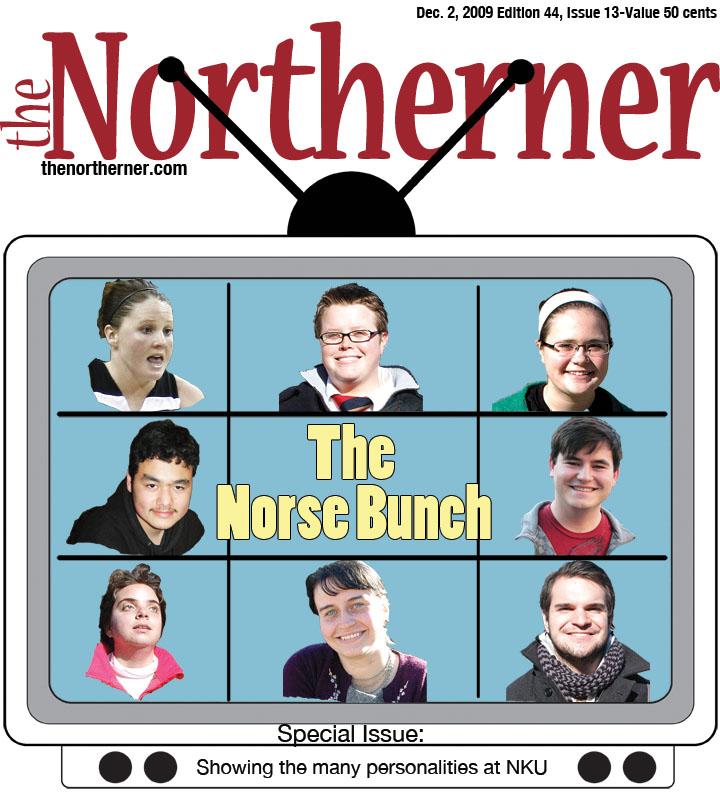 Ali Bowdler Freshman Psychology If you could do anything in the world as a job what would you do? I’m probably going to go into the FBI. I’d really like to be [in the] white collar crime division in the FBI. If you had $10,000 what would you do with it? Pay for school. What is your favorite song that describes you? Lessons Learned by Matt and Kim.’ That’s my favorite song by them. What’s the best part of going to NKU? Well I’ve made a lot of really good friends here even though I’ve only been here for like five months, and’ the professors are really great and they really seem to care more than I’d expected them too.’ What’s the weirdest job you’ve ever had? I was one of those foodservice workers at Bethesda hospital, one of those people that delivers the trays of food to the patients.’ I think I had a neightbor that was a nurse at Bethesda and she heard about it, I think I babysat for them.’ She heard about it and told me about it, it was a weird job. Have you accomplished anything that sets you apart? The only award I ever won was when I played lacrosse in highschool and I got the hard-work-pays-off award because I was a first-year goalie, and I had been defense before that and I decided to go for goalie, I ended up beating the other goalie that was on the team, I was better than her by the end of the year so that’s really the only award I’ve ever gotten.

Ian Takaoka Freshman Anthropology What do you want to be when you grow up? An archeologist.’ I was thinking I wanted to do like Mediterranean and African archeology. Which would involve Greco-roman stuff but I’d have to go somewhere else to do that to as well so I’ll need to do more work after I graduate from here. If you had $10,000 what would you do with it? I would donate it to different archeological institutions and different sites and research organizations and maybe I’d spend the rest on things for my family if I had one. What do you like about NKU? I like the honor’s stuff going on at Callahan hall, I’m going to try to move there next semester. What’s something about you that people might not know just from looking at you? I’m Canadian.’ Half Japanese Canadian and half Scottish Canadian.’ I skipped seventh and eighth grade and went straight to ninth.’ I think that’s about it.

John Lynch Freshman Spanish Favorite thing about this area? I think the familiarity because I’ve grown up here.’ I know where I could go on the weekends and I know things to do so that’s helpful.’ I guess it’s sort of both because of the small sort of social aspect because everybody sort of knows everybody. That’s nice. If you had $10,000 what would you do with it? I would probably first buy a car and if I had any left over money I would take a vacation to Spain. If you had enough money to go anywhere in the world where would you go? If I had the money I would probably travel all over Europe for a year. What do you want to do when you grow up? Currently I want to be a Spanish teacher but you never know where that will lead. Have you ever done anything that sets you apart from your friends? I’m really into music festivals, I enjoy going to them in the summer and some people don’t get that vibe from me. What’s on your playlist right now? DJ Tiesto, Animal Collective and Radiohead.

Laura Barrett Sophomore Political Science If you had 10,000 dollars what would you do with it? Probably buy too much art and then donate a lot to a homeless shelter I used to work at. What’s the coolest job you’ve ever had? I’d have to say last year I worked at a Franklin County women’s shelter as an ‘Americorp’ member and it was their first year of being open and that was probably by far the most interesting learning experience I’ve had at a job in my life. What kind of music are you listening to right now? Whatever people give me. I’m too poor to buy CDs and I don’t download music. If you could have any job no matter your experience what would it be? I would like to work with the Kentucky equal justice center, and advocate on behalf of people who are low income. Whats the coolest thing you’ve ever done? I recently picked up two biker-looking guys in a liquor store because their U-haul broke down, and gave one a ride to Cincinnati, who happens to be like some sort of crazy vintage costume designer something or other who now owes me a favor. That’s my most recent adventure ‘

Maggie Lewis Senior Political Science If you had $10,000, what would you do with it? I would put it in a high interest savings account and use the interest to supplement my bills monthly and use the extra to pay for graduate school.’ Are you involved in any student groups on campus? I’m the president of Common Ground. What is one thing you like to do for fun on the weekend? I work on the weekends.’ Honestly my favorite thing to do is sit around all Sunday and watch movies in my sweatshirt and boxers because I don’t like pants, much to my roommate’s dismay.’ If you could go anywhere in the world where would you go? Australian outback, because the probability of me getting there is very nil so there for it would be a place I would like to visit.’ It looks very interesting I find it alluring. What do you want to do when you grow up? When I grow up? Haha! My goal is actually why I came back to school was to work in advocacy for civil rights so either through a masters or doctoral program or through law. I’m looking at law school right now to work for civil right and equal rights advocacy. How would you describe yourself to other people? Why are you interesting? I think I’m interesting.’ I ask why a lot and I have a plethora of useless information.’ And the gay boys think I dress well, like a gay boy. ‘