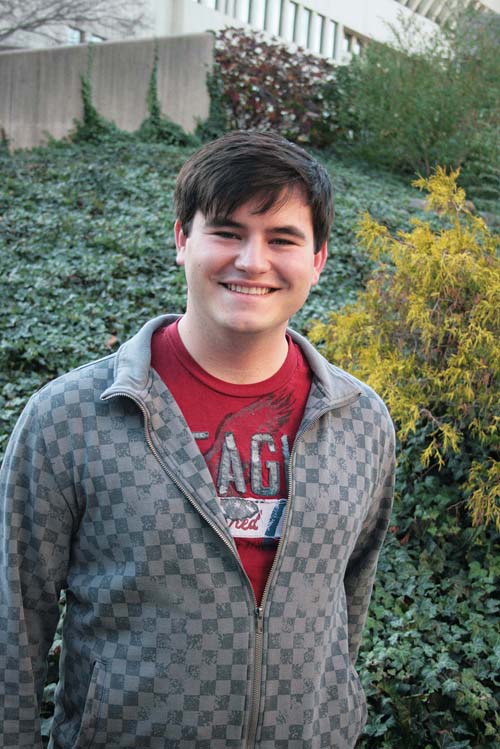 His past four years at Northern Kentucky University have been the complete antithesis of where he set out to be as a child. The precocious student from the rural backwaters of Eastern Kentucky surmised that his life, since he could remember, was destined for the career and regiment of a neuroscientist. Fascinated with the inner-workings of the brain, the path seemed to fit. But a change in priorities, his father, along with a healthy dose of serendipity disrupted that fate forever.

‘I have vivid memories of me as a kid, with my dad taking me to the movies,’ said Johnny Kyle Cook, Senior Bachelor of Fine Arts in Acting candidate. ‘That is where I began to realize that I wanted to be those people up there on the screen, not so much the neuroscientist anymore.’

From that point forward, Cook became captivated by the silver screen and all that it promised: fame, exotic locales-but more importantly-the ability to reside anywhere but the diminutive 1.4 square mile town of Louisa, nestled between the ancient mountains of Kentucky and the Big Sandy River that carved them out.’

‘I can remember sitting in the movies, dreaming of all the cool places the actors were and how the movies allowed you to become anything,’ Cook said. ‘And I was stuck here in Louisa.’

But dreaming is dreaming and, absent of drive and opportunity, it goes nowhere. The frustrated Cook was bitten by the acting bug following a few fledgling performances at his church, but without any true venue to hone his skill and realize his future, the would-be thespian had only dreams as his solace.’

‘It’s funny really. My high school had a drama class but you could only take it your senior year.’ Cook said. ‘So, as a sophomore, my parents began driving me to the community college in Ashland to perform in their plays.’

The high tenor always had a strong voice, a talent that enabled him to cut his theatrical teeth on musicals like Annie and other performances produced at Ashland’s community college. But it was during a series of workshops while participating in the Governor’s School for the Arts (a Kentucky sponsored program that provides hands-on opportunities for high school students who are budding performers, writers and visual artists) that Cook found the means by which his acting dreams could be realized.

‘It was in between my senior and junior year that I attended the GSA and truly developed a passion for performing,’ Cook said. ‘I met a few students there that would later attend NKU’s Theatre program, so it just felt right when it came time for me to go to college.’

Although Cook submitted applications and was accepted to various other colleges, he realized that NKU had what he felt was the best theatre program in the state, allowing him to perform in top-notch productions, such as Cats, Working, Much Ado about Nothing and the upcoming production of Titanic.

‘Singing and acting within all the productions at NKU has really allowed me to let go of any inhibition and just act,’ Cook said. ‘I can remember my freshman year I gave half-hearted attempts at my parts, because I didn’t want to make a fool of myself.’

As the years pressed on and Cook developed a greater sense of the stage, the audience and himself-he was able to relinquish the timidness of his freshman status, trading it in for the higher, senior tenants of acting, such as self-awareness, versatility and motivation.

‘You begin to realize that there is always going to be someone who is better than you: they sing better, they act better, they look better,’ Cook said. ‘I’ve learned over the years that you just have to embrace your talents and showcase what you have.’

Showcasing his talent has all culminated in this year’s production of Titanic. The two act performance, with a Herculean cast of 37 performers, each mic’d with bated breath and poised to Cook chomping at the bit as the architect for the ill-fated vessel.

‘I have a few enormous solos in the musical, all of which are larger than life.’ Cook said. ‘At the end, as the music builds and builds and the ship begins to sink behind me, I perform a song about what I could have done different to prevent it from sinking.’

The variety of productions at NKU has afforded Cook a wealth of experience, but the actor believes his success after graduation requires him to do more than memorize his lines.

‘I think to be a great actor you have to make the words evoke emotion, find original perspective on the lines in the moment,’ Cook said. ‘Whatever I do when I leave NKU, I want to make theater that goes beyond entertainment and truly makes a difference in people’s lives.’