Not your common carvings 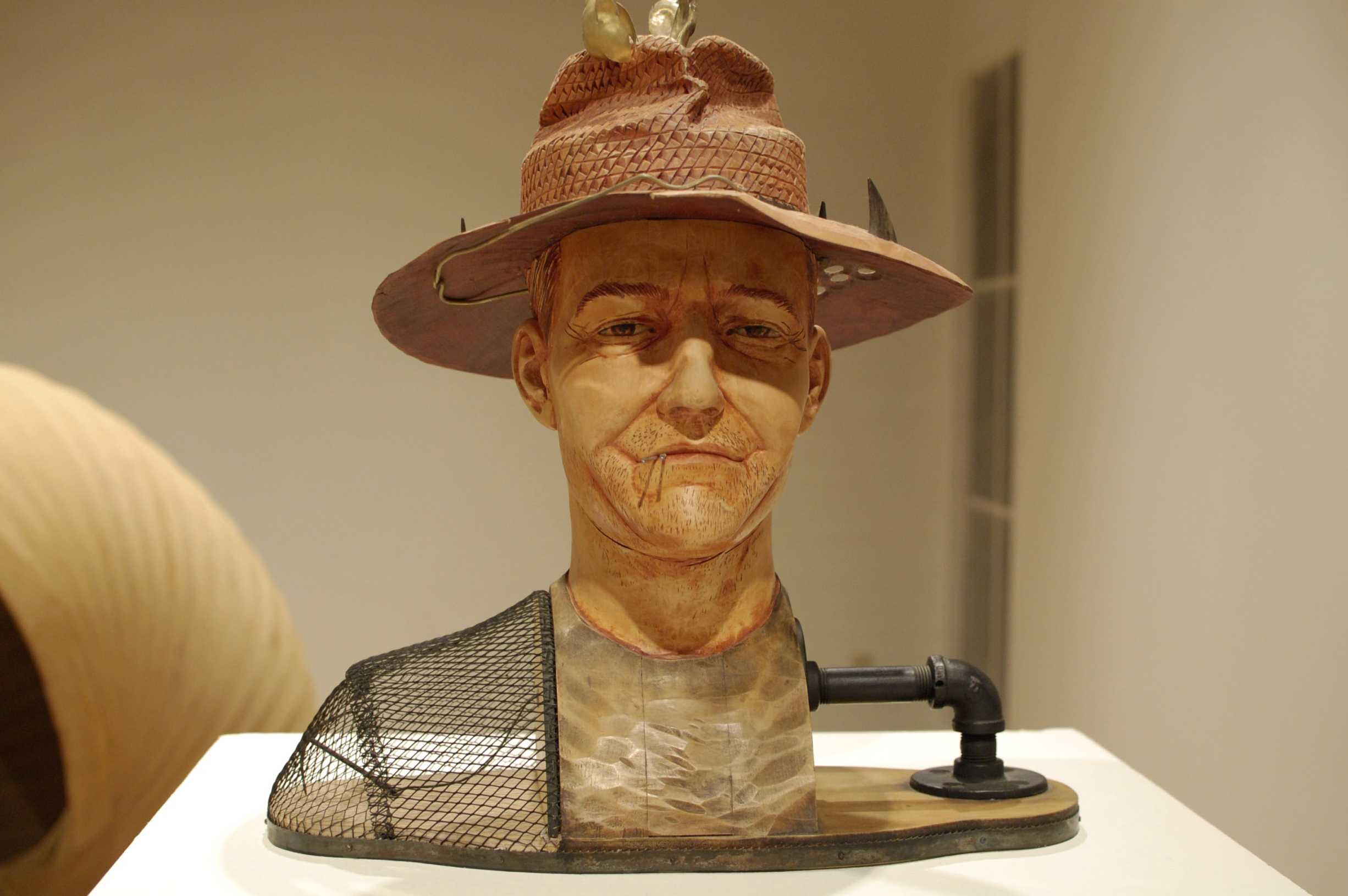 His hands are rough, half cut, half healed – all abrasive. But making art, something delicate and ornate, an object of beauty chiseled from his middle-aged and toiled fists would not persist to be referenced as carvings. Call it a sculpture, a fashioned pile of pulp, the personification of wood even — but reserve yourself to deem it common carvings.

‘It certainly isn’t a carving. That is what people who make bears out of a chainsaw and a tree stump do,’ said Stephen Geddes, local artist, sculptor, non-carver.

For the past thirty years Geddes has been turning out his art on the local Cincinnati scene. From Star Wars action figures – prototypes widdled out of wax for the now defunct Kenner toys – to an apoplectic rooster, donned with nothing but his ruffled feathers and a pair of cowboy boots – Geddes has run the gauntlet of art in his daily vocation, as well as his pastime.

But when prompted, the artist being featured at Northern Kentucky University’s Fine Arts Gallery along side works by local artist Robert Fry, is hesitant to categorize his art.

‘I’m hard pressed to pigeonhole what I do,’ Geddes said. ‘There are elements of surrealism. Some may even call it figurative, with a slight overtone of social commentary.’ With a measured motion, exact and deliberate, Geddes runs his 60 grit index finger over his Texas Chainsaw hanging on the gallery wall. He points out that the saw was shaped from golden bass wood, with the state shape adorning the body of the machine, a rusty strip of barbed wire rounding out the blade.

‘It is inspired partly by the movie,’ he said. ‘But it also in reference to the fact that not much has come out of Texas by way of honest politics in the last few years.’

While Geddes employs a fine technique, each piece of wood painstakingly scored with finite chisels, a pair of optivisors across his brow in order to magnify his current obsession-Robert Fry’s art is quite the polar opposite.

‘My sculptures are more constructive, linear and hard edged than his,’ said Fry, Covington resident and self-employed artist since 1983.

A former NKU sculpting major, Fry swaddles large chunks of timber with natural fiber rope, often butting the wood together, at other times fastening it with mortise and tenon joints, but on an immense scale-creating a work that is intrinsically organic, jagged and often obtuse.

Compare Britain’s Big Ben to a diminutive Seiko wristwatch and the juxtaposition that is inherent to these artists’s exhibit becomes clear.

‘The main reason the gallery committee chose these two artists was to compare and contrast the way wood can be used to create art,’ said David Knight, director of exhibitions at NKU. ‘One is much more traditional and the other in a much more organic and abstract.’

One of Fry’s newest works, To Fly Pull Red Handle, hangs from the gallery rafters like a dangling ship’s sail: the 8 foot timber frame fixed as a floating Isosceles triangle – a parcel of burlap strung adjacent to the center point. A single red handle is positioned atop the mass.

‘For me, it is all about taking a material that is found, maybe a tree that is diseased or destroyed by a storm,’ Fry said. ‘Maybe even something that was someone else’s junk, and transforming it into something totally different.’

Some twenty pieces in all are on display in the main gallery, Geddes and his small-scale works and Fry with his colossal timbers. Although highly different, both artists are joined by a common medium- working with wood.

But unlike Fry and his digging around trash heaps for remnants to resurrect as art,’ Geddes says that it is not above him to junk a piece of art that just isn’t turning out the way he envisioned.

‘Fortunately I have a fireplace where the pieces that frustrate me end up.’

But the pieces that work out, such as Carnegie Dream, sidestep the fireplace and go straight to the exhibits. Although 100 percent wood, Geddes hands were able to style the material in such a way to make the wood masquerade as a large steel girdle, as if it were a nude skyscraper building – devoid of any brick fa’ccedil;ade. Scores of empty work boots sit at its base, and Andrew Carnegie (philanthropist, 20 century steel tycoon) is perched atop the steel girdle, sound asleep, as books swirl about him.

‘Carnegie Dream is my favorite. As most people know, he contributed a great deal towards books and libraries,’ Geddes said. ‘But this work also speaks in service of how he developed his wealth through unacceptable and ruthless means.’

But when the exhibits are done, the spectators have gone home, and the works of art that fetch upwards of $25 thousand are still in their original spot, Geddes knows his home will soon transform back into an art collection. ‘