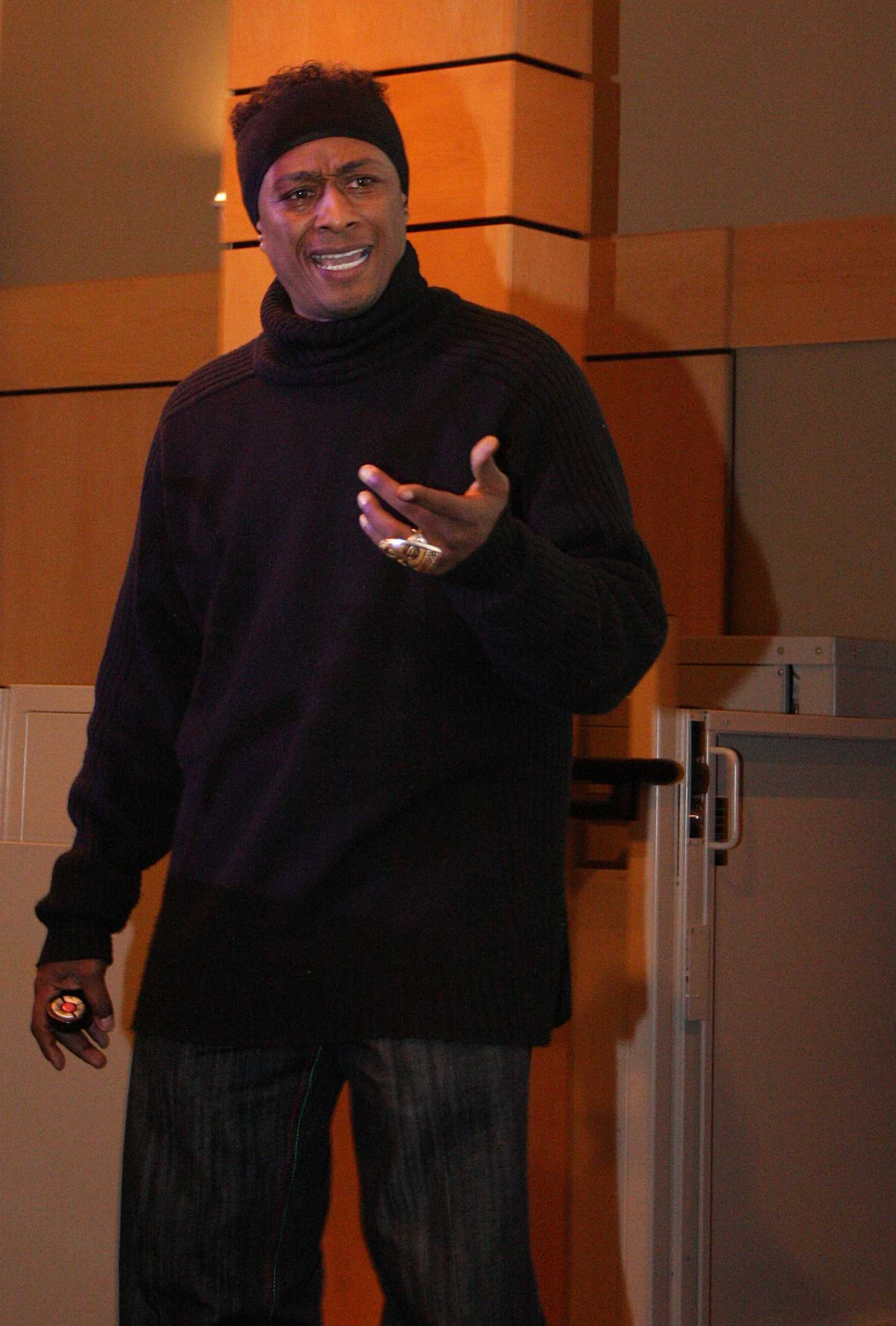 Professor Griff’ began his presentation on Feb. 19, in the Otto Budig Theatre by giving out his cell phone number and inviting anyone in the audience to call him for further discourse. ‘ His mission is to raise awareness and bring the human family back together. The Minister of Information, Griff’s Public Enemy moniker, invites debate, dialogue, and doesn’t fear the occasional diatribe. ‘ ‘I can guarantee you will not agree with everything I have to say here tonight,’ explains Griff, ‘but we have to talk. We have to have dialogue.’ The Professor presses the audience to ask themselves three fundamental questions: who am I, where am I, and am I all that I ought to be? Hip-hop stands for, ‘high infinite power healing our people.’ This is contrast to the rap sometimes mistaken for hip-hop. Hip-hop is the umbrella and rap is inside it explained Griff. Most rap contains misogynistic material within its lyrics while hip-hop is positive, uplifting and attempts to raise consciousness. This was the crusade of ‘Public Enemy.’ ‘ ‘The frequency of hip-hop and with the medium of hip-hop -we wanted to bring about hip-hop mind revolution,’ Griff said. This revolution requires a complete, constructive, conscious change. To evolve and move forward, the masses must be educated, recognize their higher self, and progress the dissemination of information. Professor Griff emphasizes the ‘know-one-teach-one’ philosophy. ‘ ‘If you leave here with one iota of truth it is your duty and responsibility to pass it on,’ Griff said. ‘Pass something positive on to the next person.’ The importance of raising awareness, educating people, easily segues into his differential between hip-hop and rap. ‘ Some popular rap artists dumb down hip-hop. They promote a lifestyle of a jail culture. Gangster rap markets materialism, misogyny, and violence. Griff states the rap group NWA as the template. In 1991, Public Enemy was candidly telling us that project is just another word for experiment. Fast-forward eighteen years, Lil’ Wayne is singing, ‘Lick it like a lollipop.’ ‘ According to Professor Griff, the poisoning of hip-hop doesn’t lie with just the record labels and marketing companies but the frequency within the music itself. ‘We have seven chakras in our bodies. Hip-hop stimulates those chakras and vibrates the crown chakra with its particular frequency. The low bass frequency of some popular rap music stimulates only the lower regions,’ Griff states. These lower chakras regions stimulate appetite and sex according to Griff. Hip-hop is a pathway of positivity, encourages expression, and isn’t esoteric. ‘It is a bridge from the past to present,’ Griff states. That bridge proved successful to those in attendance. ‘ ‘I have a better understanding of where I come and why I identify with the hip-hop culture. If people internalized it the world would be a better place,’ says NKU student Janol Vinson says. ‘It is not what the mainstream has twisted into the culture of death as Griff describes it.’